“Anne at 13,000 ft” is a Canadian mumblecore drama that plops us into a particularly tempestuous stretch of time in the life of an emotionally fragile young woman as she struggles to cope with various pressures. As plot descriptions go, I realize that previous sentence is not going to serve as an attention-grabber for most, and I completely understand if you would prefer to skip out for the more familiar likes of “Cinderella” or “Shang-Chi and the Legend of the Ten Rings.” However, if watching a low-key portrait of a person struggling through a personal crisis with a refreshing lack of cheap melodrama sounds intriguing, well, that's exactly what director Kazik Radwanski has delivered with undeniably compelling results.

Anne (Deragh Campbell) is a young woman who works at a daycare center and when we first see her, we cannot help but think that she's indeed the perfect person for the job; she throws herself into it with all the heedless joy and enthusiasm of her charges. The problem is that she gets a little too into the whole playing aspect and tends to forget her very real responsibilities as the adult in the room, which brings her into regular conflict with the other teachers. Outside of the classroom, we see her as a shy and somewhat socially awkward person whose few personal relationships—especially with her mother (Lawrene Denkers) and Matt (Matt Johnson), the guy she just began dating after drunkenly meeting him at a coworker’s wedding—are all off in some way. Although the film never specifically says anything about it, it's clear that Anne suffers from some social anxiety that can make even the most benign situation or conversation turn on a dime towards a meltdown.

At the beginning of the period of time in Anne’s life that makes up the film (roughly a couple weeks or so), Anne attends the aforementioned wedding and one of the bachelorette party activities involves tandem skydiving. For most people who have sensibly never done such a thing before, the notion of jumping out of an airplane may not seem like the most soothing of activities, but it seems to unlock something within her beyond the desire to take another leap. Although she has largely been able to keep her issues at bay, she's now unable to reconcile the sense of freedom and abandon that she felt in the air with the more controlled aspects of typical adult life and this leads to increasingly erratic behavior on her part.

Because Anne works with children, there's the nagging sense that the film is going to try to milk Anne’s issues for cheap melodrama by contriving a scene that involves one of her students being put into jeopardy. Happily, Radwanski is not interested in giving us the kind of empty-headed thriller that throws anything character-related out the window in order to focus on the machinations of the plot. Here, there's very little of what could be described as “plot” as Radwanski, whose previous films “Tower” (2012) and “How Heavy the Hammer” (2015) have also featured central characters with social interaction issues, is more interested in giving us a character study of a type of person that we probably all know. Radwanski makes viewers see the world through their viewpoint in a manner that favors empathy over judgement, even during the times when Anne crosses some serious behavioral lines.

Holding the entire film together is Campbell, who is in every single scene and who is charged with finding both the allure and the drawbacks of Anne’s state of mind and bringing them forward in a way that accurately represents her to viewers without causing them to run for the hills. From start to finish, her performance is the kind of high-wire act that could stymie most actors because if she takes just one slight misstep in how she represents Anne and her complexities, the entire thing could fall apart. Her work here is marvelous in how she balances the vulnerable and sympathetic aspects of Anne’s personality—the parts that attract others to her at first—with her tendencies to push things too far and then insist that she was just joking. Some of these scenes are wince-inducing—in perhaps the most painful, Anne visits her family with Matt in tow, after only dating him for a couple of weeks and without mentioning it to the others, and is positively gleeful over the discomfort she has caused all around—but they do an effective job of showing Anne, in her own deeply imperfect way, trying to illustrate the discomfort that she feels all the time towards those who love her but nevertheless do not quite understand her.

“Anne at 13,000 ft” is not entirely flawless—the skydiving conceit, although handled as deftly as can be, is maybe a bit too on the nose and leads to a final shot that's not nearly as enigmatic as Radwanski presumably intended it to be. Additionally, even though it runs for a relatively slight 75 minutes, the film's journey is so intense and wounding at certain points that even those who admire it in the end may find it to be too stressful at times. However, while this may not be an easy or relaxing film, it's nevertheless a smart and effective exploration of contemporary mental health issues that deserves to be seen. 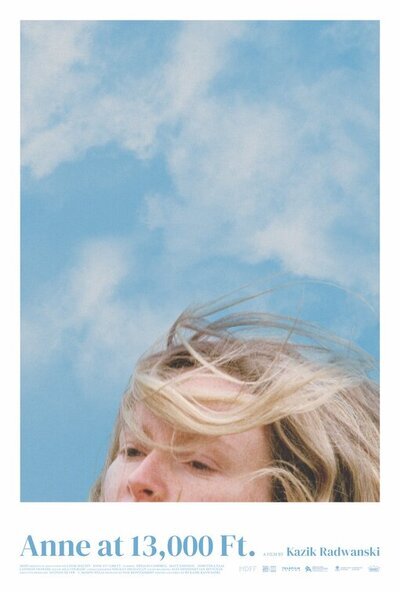