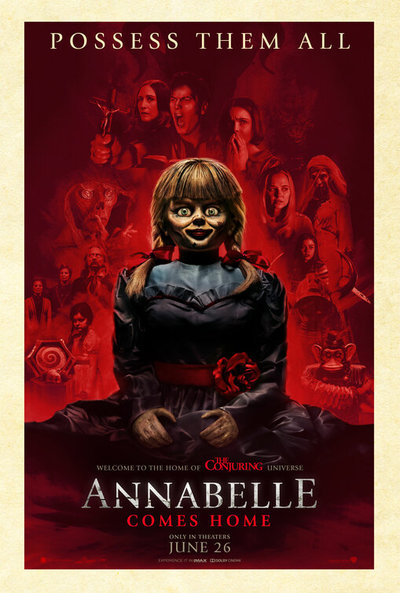 “It scares us just thinking about it.”

Before calling upon its own time-spanning cinematic universe of cursed objects and malevolent spirits, James Wan’s “The Conjuring”—among the most terrifying horror films of the 21st Century—opened with these words back in 2013. They were spoken by a pair of young nurses haunted by Annabelle, a bizarrely compelling collector’s item doll seized by a sinister presence aiming to eventually possess a human spirit. The 1968 case of Annabelle served as our isolated introduction to Ed and Lorraine Warren (played throughout the series by the dedicated duo Patrick Wilson and Vera Farmiga with spiritual conviction); a pair of religious paranormal researchers who contained the evil in their room of ominous conduits before “The Conjuring” launched into its own story. As Ed Warren put it, it was just better to keep the genie in the bottle instead of destroying the doll.

I realize this context reads a bit like homework as most “something-something universe” summaries often do. Nevertheless, it is an important set up for the latest and only sufficiently creepy franchise spinoff “Annabelle Comes Home,” which takes that same genie out of the bottle some years after the nurses got rid of it. In a way, this is the chronological “Annabelle” movie we all secretly wanted while watching “The Conjuring” years ago; it is actually surprising that it took nearly half a dozen sequels and underwhelming byproducts like “The Curse of La Llorona” or “The Nun” to show us what happened when the Warrens added another item into their growing family of locked-away demons. If only the half-baked story could also meet our expectations, or at least match the logic of the previous two “Annabelle” films.

In this installment by debut director Gary Dauberman (the scribe for the earlier two Annabelle movies), we pick up exactly where the opening scene of “The Conjuring” left off. After an eventful car ride that announces the severity of Annabelle’s menace, the Warrens decide to contain the doll in a blessed glass case in their residence, away from the eyes and ears of their precocious 10-year-old daughter Judy, played by the soulful “Gifted” actress Mckenna Grace with astuteness beyond her years. A totally normal kid considering the circumstances—who amongst us would have turned out okay if we were raised in a haunted house by demonologist parents constantly making the headlines?—Judy gets bullied in school all the same, having trouble even recruiting enough friends to come to her birthday celebration.

While most of the kids are mean to her, Judy seems to have lucked out with her affable babysitter Mary Ellen (Madison Iseman)—the charming teenager happily signs on for the task to look after the troubled kid while the Warrens take off on an overnight trip. A gifted clairvoyant like her mother—she even gets her own “I see dead people” scene—Judy appears to be unusually mature about her views on death and afterlife, at least enough to advise Mary Ellen’s firebrand of a friend Daniela (Katie Sarife) who still harbors wounds about her deceased father. If only that were adequate for Daniela—her pain proves to be so deep that she ends up being the one to sneak into the forbidden room of artifacts to communicate with her father, only to involuntarily awaken whatever’s inside Annabelle.

Along with his cinematographer Michael Burgess, Dauberman swiftly utilizes every nook and cranny of the Warren house for maximum spookiness—predictably, the well-choreographed scenes in the artifact room are the film’s strongest. And yet, while it’s fun to be in the company of an all-girls squad who have to survive a sleepover fright fest, the scares of “Annabelle Comes Home” don’t push the envelope much further than creaky floorboards and teased horrors hidden from camera’s view only to be revealed seconds later for generic jump scares.

But the real problem here is the lack of a sincere story. Daniela’s initial and completely implausible break into the prohibited room—clearly marked with various warning signs—followed by her opening of Annabelle’s case labeled with a massive “Positively Do Not Open” notice, makes very little sense. We only vaguely comprehend how a curious teen could be that fearless, and only mildly sympathize with her reasons to stubbornly put everyone in danger’s way. Meanwhile the script (also by Dauberman, from a story by Wan) doesn’t grant Daniela the generosity of smarts. For the most part, her actions and bravery seem senselessly obtuse, begging the question, why can’t she just ask the Warrens to safely initiate a connection with her father, if it could be done at all?

Still, “Annabelle Comes Home” isn’t entirely without its guilty pleasures. “The Conjuring” universe has always sported top-notch period costuming, and the latest chapter follows suit with Leah Butler’s skillful designs that tiptoe around the transitional looks of the early ‘70s. Dauberman also does right by the wacky humor of the franchise, which he delivers through a character named Bob, so adorably smitten with Mary Ellen that he pledges to survive his own little corner of horrors. Eventually, Dauberman hits an unexpectedly sweet note with the accumulation of various female coming-of-age stories. But “Annabelle Comes Home” proves it’s perhaps time to put the genie back in its bottle and bring this particular creepy doll series to a decisive close.