If “Anna” were made by any other filmmaker, it could be dismissed as little more than a shameless attempt to copy the offbeat and visually stylish action epics of French filmmaker Luc Besson that goes disastrously wrong right from the start and only gets worse as things progress. In fact, “Anna” was written and directed by Besson himself and it still feels like a misfired rehash of his greatest hits. In the wake of the enormous box-office failure of his previous film, the wildly ambitious sci-fi saga “Valerian and the City of a Thousand Planets," it makes a certain amount of sense that he might want to retreat to something a little more familiar as a way of reestablishing his commercial standing, but even long-standing fans of his will find it hard to muster much enthusiasm for this startlingly lazy bit of by-the-numbers hackwork.

As the film opens in 1990, Anna (Sasha Luss), a beautiful young Russian, is selling nesting dolls in a Moscow market when she is spotted by a scout for a French modeling agency and sent off to Paris to work. Before long, she catches the eye of a fellow countryman, a wealthy businessman who is one of the investors in the firm, using the money that he makes illegally selling weapons to the enemies of the world. After a couple of months of flirtation, it seems as she is about to go to bed with him until she puts an end to the whole thing by cooly putting a bullet in his head.

Three years earlier, the brilliant-but-downtrodden Anna was living on the fringes of society with an abusive criminal boyfriend and a desperate need to escape her horrible circumstances. This escape comes in the form of Alex ((Luke Evans), a KGB agent who recognizes the usefulness of her combination of beauty, brains and ambition and offers her a chance to join the organization and work with him and his boss, the imperious Olga (Helen Mirren, evidently using this film as an audition reel for the role of Edna in the inevitable live-action remake of “The Incredibles.”), with the promise that she will be free to go after five years of service.

Back in 1990, Anna is maintaining her cover as an up-and-coming model, even going so far as to establish a romance with fellow model named Maud (Lera Abova) while knocking off the occasional target—generally while wearing something of a fetishy nature—and carrying on a clandestine romance with Alex in her spare time. Eventually, Anna’s cover is blown by Lenny Miller (Cillian Murphy), an American CIA agent who wants to put her to use for his own particular ends to settle a gruesome score depicted in an otherwise mystifying prologue. With no other alternative, Anna agrees and even begins sleeping with him as well. Before long, however, Anna just wants to be rid of all entanglements and deploys her cunning, sexuality and ability to kill many people while wearing what appears to be the entire Victoria’s Secret spring line.

At this point, some of you with longer memories may be thinking that this description of “Anna” makes it sound quite similar to “La Femme Nikita,” the 1990 action hit that marked Besson’s major international breakthrough. In fact, it is so similar in so many ways that it feels as if Besson dug up an early draft of that screenplay and simply shot that after changing the character names and some of the locations. (This might explain why the story insists on taking place around 1990 even though the technology employed by the characters throughout is almost distractingly anachronistic.) Now if Besson had chosen to rework such familiar material as a way of exploring the change in gender attitudes in genre filmmaking since the release of “La Femme Nikita,” that might have been an interesting approach (especially considering how the film’s release comes on the heels of several allegations of sexual misconduct, including rape, that have been leveled against Besson over the last year or so), but the only significant addition here is a distractingly fragmented time structure in which a shocking revelation is made and then the story rewinds to spend a chunk of time explaining the backstory behind the new development. This approach adds nothing of value or interest to the proceedings and has clearly been deployed in an attempt to distract viewers from recognizing just how predictable everything really is.

I have been a passionate fan of Besson’s films for years and have embraced his films—yes, even “Valerian”—for their impeccable and distinctive style, the intricately choreographed action sequences, the cheerfully oddball narratives often studded with moments of welcome wacko humor and the charismatic performances from the actresses who have been the central figures of most of his stories over the years. Amazingly, virtually none of these elements are on display here. Instead of the infectious and almost gleeful energy that usually drives his films, Besson just seems to be going through the motions, and his work, despite the contributions of such regular collaborators as cinematographer Thierry Arbogast, editor Julien Rey and composer Eric Serra, is as bland as can be. Aside from two admittedly standout sequences—Anna’s debut as an assassin in a crowded restaurant, in which she ends up using broken plates as lethal weapons, and a montage that juxtaposes her modeling and murdering gigs—the actions beats are ho-hum and the entire thing is lacking any real sense of humor. (The film has one ingenious idea—the conceit of a cutthroat killer going undercover in the equally cutthroat world of modelling—but does nothing with it other than the aforementioned montage and an off-putting bit where Anna gets revenge on a creepy photographer seemingly inspired by Terry Richardson.) As for Sasha Luss, she is undeniably gorgeous but does not bring much of anything else to the table here—she certainly demonstrates none of the undeniable screen charisma displayed by the likes of Anne Parillaud, Natalie Portman, Milla Jovovich and Cara Delevingne in their various screen collaborations with Besson.

Of course, Besson has made bad movies in the past but even in clunkers like “The Family” and “The Lady,” he was at least making some kind of discernible effort. “Anna,” on the other hand, is so aimless and listless that you can hardly believe that he was even on the set for the majority of its production. All he has to offer here is the aforementioned two decent action scenes, some interesting underwear and a Helen Mirren performance that is mildly amusing, though it will not take up too much time in any future Lifetime Achievement highlight reels. Of course, there will be some who will decry that someone under the kind of cloud of suspicion that Besson is still facing should not be allowed to make and release any film in this current climate. Ironicaly, if this had actually happened to “Anna,” though, it would have only been doing Besson a favor. 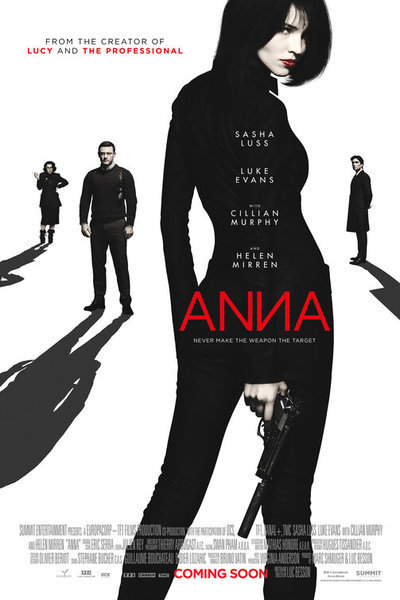 Rated R for strong violence, language, and some sexual content.