"Anchorman 2: The Legend Continues" finds Will Ferrell's vain news reader Ron Burgundy trying to re-create himself at a CNN-type network in the eighties, and accidentally inventing the soul-sucking brand of non-news that now rules cable. It's a pretty good joke, one that you might even call "satirical," but it's not sustained; the movie keeps forgetting about it, just as it keeps forgetting about Ron's desire to reunited with estranged wife Veronica Corningstone (Christina Applegate) and their ickily sweet son Walter (who's named for Walter Cronkite and played by Judah Nelson). Nothing in "Anchorman 2" is sustained, really. As directed by Adam McKay, who helmed the original, it's a slapped-together movie—more so than most movies by former "Saturday Night Live" stars, more so than most Will Ferrell films, and certainly more so than the original 2004 "Anchorman," a bunch of heavily improvised bits that nevertheless seemed to be going somewhere because they were woven around the story of Ron and Veronica's romance and professional rivalry.

The couple's bond falls apart in this film's opening sequence, which finds the duo anchoring a weekend broadcast at a New York-based network in 1980. Their boss (Harrison Ford, amusingly menacing) tells them he's retiring and that Veronica will replace him, becoming the first female anchor in the company's history. Ron is fired for being the worst anchor anyone has ever seen, leaves Veronica rather than live in her shadow, then endures a period of mourning before returning to New York to join a 24-hour network modeled on both CNN (the format) and Fox News (tabloid mentality, brash Australian owner played by Josh Lawson). Veronica then becomes a non-presence—a shame considering how much Applegate enriched and complicated the original—so that Ron can be Ron, jamming his tonsils into the lens and bellowing nonsense while his GNN producer (Dylan Baker) looks on, aghast.

Granted, a movie about Ron competing with Veronica to salve his wounded ego and win back her love would have felt like a baldfaced rehash of "Anchorman," but let's face it: that's what "The Legend Continues" is anyway. Why not make it official? Many of the first film's now beloved (or notorious) set-pieces get rehashed, including the jazz flute solo, the scene in which Brian Fantana shows off his cologne collection (this time it's condoms) and the bloody battle of the news teams (restaged here with more participants, weirder weaponry, and more guest stars). The sequel gives Ron two foils—handsome and obnoxious rival anchor Jack Lime (James Marsden) and hotshot news director Linda Jackson (Meagan Good)—but doesn't develop either in a coherent manner. Ron's competition with Lime is poured into a single dumb bet whose punchline is repeated but never gets any funnier, and the tension between Ron and Linda—which flowers into a romance that neither the actors nor the film seem to believe in—is half-baked at best.

Linda, in fact, makes zero sense as a character. She's cagey, she's impulsive, she finds Ron intolerable but wants to sleep with him and then be his love-dovey girlfriend? Say what? She's also the butt of jokes that are meant to send up Ron's entitled white guyness (on first meeting her, he keeps blurting out "black" over and over) but that often seem like pretexts to have a white guy say racist things in front of black characters who are written in a way that stops them from properly responding to his idiocy. Ron's attempt to talk jive at a dinner with Linda's straitlaced bourgeois family—at one point using the phrase "pipe-hittin' bitches"—is the movie's low point.

"Anchorman 2," which is co-written by Ferrell and McKay, lacks the original's momentum. It only sometimes builds to the peaks of lunacy that you want and need from this sort of picture. It goes here, it goes there, it does this, it does that; occasionally it remembers that Ron has goals and desires and that the film needs to end at some point, and after 100 minutes or so, end it does. You could describe most W.C. Fields or Marx brothers or Jerry Lewis movies the same way, of course. But here—unlike in the old great works of context-free clowning, or "Anchorman," a modern classic of raucous silliness—most of the scenes and gags feel more slapped together than summoned from the head of Zeus. And there are too many reaction shots of characters saying things along the lines of, "Why, that's ridiculous" or "You can't do that!"—the screen comedy version of trying to make a sentence more exciting by ending with an exclamation point! An exclamation point! Yes!

There are a handful of strong sequences. The early stretch in which Ron rebuilds his news team en route to GNN is a kick: Fantana is a hotshot photographer who at first seems to be a porn king but isn't; David Koechner's sports guy Champ Kind is running a chain of chicken restaurants that don't actually sell chicken, and chronically stupid weatherman Brick Tamland is...well, let's not spoil it, except to say that someone involved with "Anchorman 2" has read "The Adventures of Tom Sawyer." And every now and then, the movie gives you a dandy one-off image or line, such as the Patrick Nagel caricatures on the walls of the news team's swingin' bachelor pad, or the lovestruck banter between Brick and an equally dim office assistant played by Kristin Wiig. ("Last night a bird chased me and I wished it was you," she tells him.) And there's a sequence near the end that feels like the seed of a far richer, stranger sequel: a sendup of the corny "inspirational" TV movies that viewers of a certain age will remember all too well, in which a character overcomes a handicap after years of feeling sorry for himself. But these are bright spots in a film that's just a couple of notches above an off-brand "SNL" time-waster. 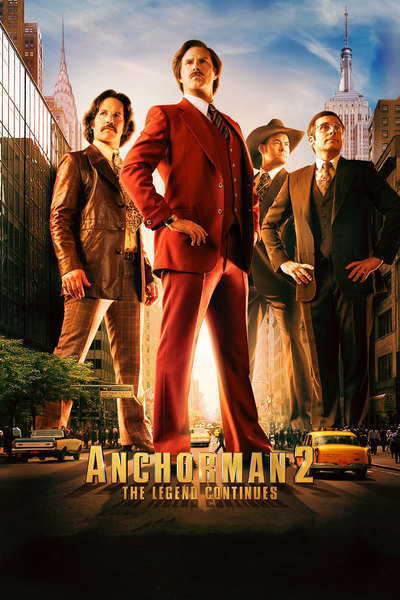 Will Ferrell as Ron Burgundy