There are secrets galore in a grimy attic and beyond in Romola Garai’s “Amulet,” a gothic horror-thriller with a lot on its mind about gender and the superficial norms that surround it. Weaving together various timelines and heart-wrenching traumas with generous helpings of giallo motifs and haunted house tropes, the actor-turned-director Garai serves up something both promising and puzzling through her initial effort in the director’s chair. Suffused with plenty of gross-out, phantasmagoric body horror but short on actual spine-tingling scares, the handsomely-produced “Amulet” asserts Garai more as a gifted genre stylist than a savvy storyteller.

At least for now, as the writer/director clearly has worthwhile yet unripe ideas about perception and likes to play with them on the page and behind the camera. In that, she manipulates ours liberally throughout the film’s nearly 100-minute (and at times, sluggishly paced) running time, until an inelegant twist in the end clarifies some burning questions. Though this fair but poorly pursued ambition to not divulge too much too soon comes at a cost—the characters mostly remain vague and underwritten, with their unique circumstances finally making sense only when the easy-way-out twist happens.

Leading the pack of indistinct personas in Garai’s tale is Tomaz (Alec Secareanu of “God’s Own Country,” considerably less subtle here), a former soldier with visceral wounds he’d procured during some kind of unnamed European war or civil conflict that the film seldom cuts to. We meet him while he goes about his mind-numbing job in a distant forest, situated at a two-day walking distance from the nearest town. In stingy drips, we get a general but limited sense of his isolated life there and what he was up to before, until one day he takes in young Miriam (the Yorgos Lanthimos regular Angeliki Papoulia) to his cabin. The frightened woman appears out of nowhere and Tomaz, who already seems to be battling against some sinister urges, ineptly goes out of his way to make her feel safe and comfortable, though always with a visible dose of uneasiness in his voice and body language. One day, he offers Miriam an amulet he dug up in the forest as a device of protection.

In the main terrain of the film, Tomaz finds himself in London some imprecise months later, working odd jobs until an arson attack displaces him, putting him at the mercy of a terrific Imelda Staunton’s kindly nun Sister Claire. She makes him a simple, too-good-to-be-true offer that he can’t refuse: help the women of her derelict town home (where the bulk of the film is set) with maintenance tasks and live at the premises cost-free. Among the ladies of the storied residence is the young, shy-mannered Magda (Carla Juri), who cares for her ailing (and often screaming) mother locked away in the attic and cooks a whole lot of suspiciously meat-centric meals for an ever-grateful Tomaz. Slowly though, odd happenings start creeping their way into the outcast Tomaz’s life: Why has the dire plumbing problem here not been addressed before? What’s the half bat-half rat-looking creature contaminating the bowels of the house with bloody goo? And what’s the history of this typical English home—who lived here before and why have they moved, leaving all their belongings behind?

Garai eventually answers all of these questions to varying degrees, while often reshuffling her narrative priorities, and the nature of power and association between Tomaz and the seemingly helpless women. Sadly, she does so in a painfully slow-moving manner, while muddying her clever #MeToo-themed story with frequent, clumsily parsed flashbacks and an awkwardly played romance, as well as symbolism and mythology-heavy effects that don’t add up to much. Still, the crafts make the journey worthwhile—as clichéd as it might sound, defining the house itself as the main (and the most interesting) character of “Amulet” wouldn’t be a stretch. Production designer Francesca Massariol gives life to the locale’s dilapidated chambers with textured touches on every corner, while Laura Bellingham’s stalker-y camera intensifies their spooky impact with some truly memorable gory imagery.

The director cites “The Babadook” and “Under the Shadow,” two superb and recent female-led horror films, as her loose influences on depicting womanly grief and various buried pains. But what she pulls off with “Amulet,” at least in style, feels closer to a mesh up of the witcheries of “Suspiria” (the dark-hued Luca Guadagnino version) by way of “mother!,” an inquiry into gender-based power dynamics and related marital discord. She doesn’t quite harness the elegance or philosophical weight of any of the aforesaid films—perhaps leaner ambitions could have landed her somewhere in the ballpark. 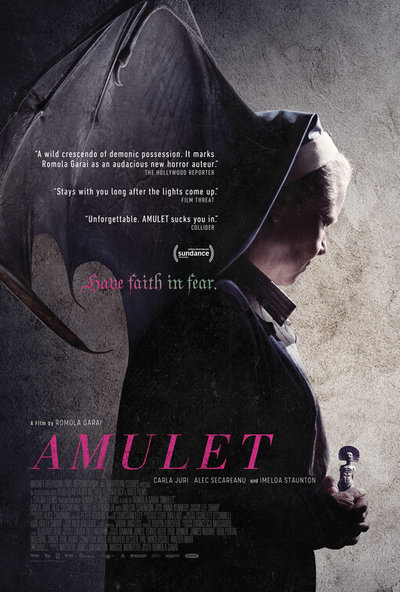 Rated R for some strong violence, bloody images, a sexual assault, and brief language and nudity.