“American Pastoral” is a staggering misfire on two discrete levels. As an adaptation of the 1997 novel by Philip Roth, it is lead-footed and inept. The screenplay, by John Romano, treats the narrative in a way that strongly suggests what I hope was a willful misreading of the book. But even considered entirely separately from its source material, “American Pastoral” is hopelessly weak. It is a period piece with no sense of place, one whose sense of time is suggested only be vintage-store knick-knacks and staggeringly on-the-nose-musical choices. It is a movie that strands its excellent cast, which includes Jennifer Connelly, Peter Reigert, Dakota Fanning, Uzo Aduba and Molly Parker, in a series of emotional scenes that, linearity of narrative notwithstanding, seem to bear almost no relation to each other.

Which is the fault of the film’s director, Ewan McGregor, who also plays the male lead of the piece, Seymour “The Swede” Levov, a fellow whose seemingly charmed life falls apart in the social upheaval of the American ‘60s, during which time his troubled teen daughter Merry (Fanning) plants a bomb in their rural Jersey general store, kills a man, and goes on the lam. In Roth’s novel, The Swede’s sad story is begun by Nathan Zuckerman, a Roth surrogate, who spins a detailed tale of the industrious, striving Jews of 1940s Newark, New Jersey, and how The Swede, a star high school athlete whose light hair and blue eyes helped earn him that nickname, always did the right thing by everybody. Enlisting in the Marines when he didn’t have to, taking over his father’s glove business instead of turning pro, and so on. There were some gestures of rebellion: marrying a Gentile beauty queen, for instance. But in so many respects The Swede’s life was of the kind meant when one refers to “the American dream,” and in Roth’s book what that means for an American Jew is given very particular emphasis.

For the Scottish McGregor to play an American Jew, even one whose appearance did not fit the stereotype/norm, would be challenge enough on its own. That he is also making his directorial feature debut with this material is, well, curious. The opening scenes are handled with a certain conventional competence. David Straithairn, as Zuckerman, shows up at a high school reunion and runs into Jerry Levov, the Swede’s younger brother. He’s played by Rupert Evans, and in this scene he wears terribly unconvincing old-age makeup. Flashbacks to The Swede’s high-school glory follow. Then follows the introduction of McGregor’s young adult Swede, presenting his beauty-queen sweetheart Dawn (Connelly) to cantankerous father Lou (Reigert). So far, so adequate. Things begin to head south around the point The Swede and Dawn settle into the fictional town of Old Rimrock. “We can live where we want,” The Swede proclaims. “This is America.” Alexander Desplat’s score at this point starts sounding like phoned-in Aaron Copeland.

Roth’s book is a little more complex than most accounts of it will tell you. After the first couple of chapters, in which Zuckerman relates what he personally knows about The Swede and the events in his life, the remainder of the book subsists of material that Zuckerman admittedly makes up about the man and his story. It’s a form of meta narrative, and it goes a long way to making sense of characters that actually make little sense in a realistic narrative. One such character is Rita Cohen, a young radical who contacts The Swede after Merry has gone on the lam, and tortures the decent man with radical rhetoric and vehement sexual gameplaying. Rita makes sense as a Zuckerman projection: as a “real” character in this tragedy, she does not, but that doesn’t stop Romano and McGregor from presenting her as such. (Valorie Curry, who plays the role, works hard to make her credible.)

By the time Rita shows up, the false notes have begun to drown out the true ones. Such as an argument between The Swede and Merry (Fanning) about politics that’s underscored by Buffalo Springfield’s “For What It’s Worth,” a song that has by now lost all meaning as a signifier of the ‘60s or anything else for that matter. Similarly, the movie downplays the father-daughter relationship, throwing their verbal exchanges away and instead signaling Merry’s rebellion by having her play Jefferson Airplane records in her room too loud. Romano’s scenario gives more heft to the character of Dawn, but transforms her into something of a hateful harridan in the process. People who accept the contemporary caricature of Roth as a misogynist might not believe it, but the portrait of Dawn in the book is both more sympathetic and more empathetic to her resentment of having once been a beauty queen.

That the usually impeccable Straithairn portrays the tragic ironist Zuckerman as a straight-across-the-plate Man of Gravitas tells you all you need to know about this movie. Movies that adapt literary works can only succeed through a dual process of distillation; the work in question has to be reduced (arguably) to fit into a time slot and head space that literature does not impose. And, maybe more importantly, the book author’s vision has to be replaced by an equally valid vision coming from the filmmaker. “American Pastoral” can’t muster any such vision, because it’s a movie that finds its makers way over their heads: historically, politically, and aesthetically. 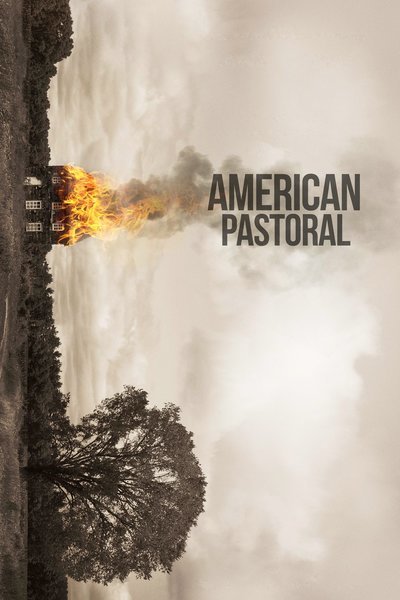