“Lynching was a message crime,” says Sherrilyn Ifill during her first appearance in “Always in Season,” Jacqueline Olive’s harrowing documentary about the investigation of a teenager’s death. In 2014, 17-year old Lennon Lacy was found hanging from a swing set in the rural town of Bladenboro, North Carolina. The Bladenboro police quickly ruled his death a suicide, seemingly after doing very little investigation into the matter. Lacy’s mother, Claudia, sought a further inquest into the matter, leading to a federal investigation. Neither she nor Lennon’s friends thought he was distraught enough to take his own life. They each assumed it was a homicide made to look like a suicide—in other words, a lynching.

Olive crosscuts the Lacy investigation with two incontrovertible instances of victims being lynched, one from 1934 and the other from 1946. She delves into these horrific crimes, the latter of which is re-enacted every year by people in Monroe, Georgia, and she spares no details. No justice was ever served for the five victims of the other two stories Olive documents, and it’s no spoiler to state that the Lacy family feels no justice was served in their case either. While “Always in Season” doesn’t definitely conclude that Lennon Lacy was a victim of foul play, it thoroughly investigates the historical reasons why one would think he might have been.

In the 1934 instance, Claude Neal was accused of raping a White woman at her farm. A mob decided to take justice into their own hands, offering the father of the victim a pre-lynching violent act of revenge. This wasn’t done under cover of darkness; echoing Ifill’s description, the perpetrators take out ads in the local newspaper and put up flyers for this upcoming murder. They describe the event as a “hanging bee” and cordially invite their White brethren to attend. Many show up, because lynchings were also seen as photo opportunities and social gatherings. The Florida NAACP wired the governor asking him to intervene on Neal’s behalf, but to no avail. The ghastly, inhumane details of what befell Neal’s body before he was strung up in a public area are read by Danny Glover, whose narration is sparsely but effectively used throughout the film. It is too graphic for me to describe here, and Olive’s use of farm-based visuals makes it even more disturbing. Neal’s battered body, which we see, became a postcard that was sold for 50 cents.

The 1946 quadruple lynching at Moore’s Ford Bridge in Monroe, Georgia takes up a good portion of “Always in Season.” Its yearly re-enactment by residents allows Olive to get current opinions on this sordid chapter in American history as well as speak with relatives of the people murdered. Interviewing both Black and White denizens about the re-enactment, she gets some unexpected responses. A Black resident says “leave the past in the past and let these people rest.” A White resident asks “what does this [restaging] tell Black people?” Cassandra Green, the current director of the Moore’s Ford Bridge re-enactment, has answers to both questions: This is American history, not just Black history, and it shouldn’t be forgotten. Especially since the crime has never been solved.

In talking with the people involved in portraying roles in the yearly replay, Olive gets a good cross-section of comments and first-person narratives regarding experiences with racism and how it affects everyone. Some of the participants had relatives who were murdered and others had relatives who did the murdering. One re-enactor describes seeing her first lynching at three years old as her father and his Klansman friends brought her to their crime. “A lot of wives didn’t know how to deal with their husbands,” she says, explaining why her mother went along with this idea. Green highlights the viciousness of the crime and how, again echoing Ifill’s words, that the brutality sent a message to “uppity” folks who needed reminders of their place.

Olive gives us several views of the re-enactment, and even though it is fake, it is excruciating to watch. There is fake blood and multiple gunshots. One of the victims is pregnant and suffers the worst fate imaginable. I consider myself a hardened, even cynical viewer of staged violence and yet I was shaken. Olive cuts to the pained reactions of audience members of all races, among them little Black children. I was initially shocked that someone would bring their kids to something this violent, then I realized that this was a juxtaposition of actual lynching pictures where KKK members brought their kids along for reasons that ran counter to why people brought their kids to the staged event.

“Always in Season” slowly and meticulously ties these events to its current story of the Lacy family’s quest for answers and why they don’t believe Lennon Lacy killed himself. The primary reasons for lynching, according to Ifill and the Equal Justice Initiative’s Bryan Stephenson, is a belief there had been some romantic or sexual intention or interaction between the victim and a White woman. We later meet Michelle Brimhall, Lennon’s White 32-year old ex-girlfriend, whose relationship with the deceased was looked down upon by the parents of one of his friends. We are told by Lennon’s older brother that the police held Lennon’s body for three days without offering any answers to the family. “The police department was closed,” he says incredulously. And we learn that forensics evidence may not have been collected. By all accounts, Lennon was distraught over his breakup and the death of his beloved uncle, but he was also excited to play in the big game scheduled for the day after his death. Lennon was part of an interracial trio of inseparable friends, and even they seem to suspect something’s amiss.

By virtue of its subject, “Always in Season” is going to be a very hard sit for many, but this film should be seen. It is an unflinching look at how the racial sins of the past flow through the arteries of the present day. Since the Lacy investigation started, there have been 20 Black men who were found hanged in a public place. These were all quickly deemed suicides without much investigation, if any. So, suspicion is easily understandable and not without precedent. Some of the people involved in the Monroe crime may still be alive, but nobody’s talking. If Lennon Lacy’s death is indeed homicide, the killers still walk amongst his relatives—and nobody’s talking. When asked by Olive why people in Monroe needed to see that yearly replay, an actress says “because it’s history.” It shouldn’t be buried. As Faulkner wrote, “The past is never dead. It's not even past.” 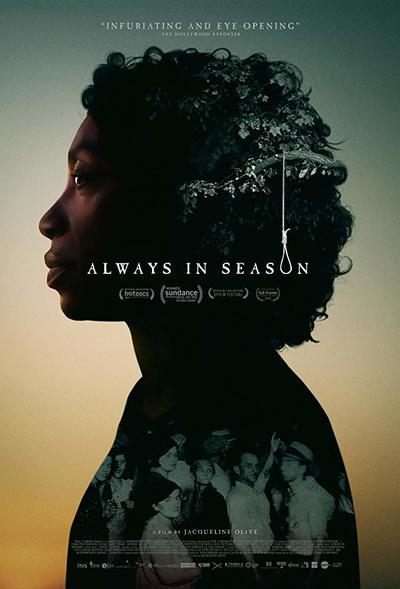