Ever since “Saving Private Ryan” ushered in heretofore unheard-of levels of gruesome and graphic detail to its World War II combat sequences, pretty much every WWII film that has been produced since then, right up to the recent “Hacksaw Ridge,” has gone to great lengths to stress the horrors of combat and its intense physical and psychological pressures. (Yes, “Inglourious Basterds” was a significant exception to this rule but I think we can all agree that strict historical fidelity was not high on that film’s agenda.) That is all well and good but would Hollywood ever again produce the kind of WWII movie that they used to make back in the day—the kind that mixed together action, politics, drama, humor and romance as enacted by impossibly glamorous movie stars? “Allied,” the new film from Robert Zemeckis, is just that kind of film.

While it may not quite be the modern-day “Casablanca,” it is nevertheless a grandly entertaining stab at old-fashioned storytelling (albeit with levels of sex, violence and profanity that they could never have gotten away with back in the day) buoyed by smart and stylish filmmaking, a good performance by Brad Pitt and an even better one from Marion Cotillard.

As the film opens in 1942, Pitt's Canadian intelligence officer Max Vatan parachutes into North Africa and makes his way to Casablanca. His mission is to assassinate the German ambassador with the help of Marianne Beausejour (Cotillard), a French Resistance fighter who will be posing as his wife and who has gotten herself into the good graces of the local Nazi bigwigs. Over the course of the next few days, they prepare themselves for the mission while trying to establish themselves as a loving married couple so as not to arouse any suspicion. Something does get aroused between the two of them despite their professional attitudes, culminating in one of the more intriguingly staged love scenes of recent memory. With that out of the way, they complete their mission in an equally spectacular manner. During their escape, Max asks Marianne to return to London with him so that they can get married.

The story picks up a year later with Max and Marianne married and living in London with their infant daughter in as much bliss as one could possibly hope for during wartime. That all comes to an abrupt end when he is called into headquarters and informed by an officious S.O.E. official (Simon McBurney) that there's evidence suggesting that the real Marianne Beausejour was killed a couple of years earlier and that his wife is actually a German spy. Max cannot believe this but the evidence, while not quite conclusive, is fairly damning. To settle the question once and for all, he is ordered to leave some fake information lying around where she can find it—if it turns up in the next intercepted German communique, she is guilty. If she does turn out to be a spy, Max is required to kill her. If he refuses or tries to tip her off, it will lead to his execution as well. To make matters even more discomfiting, not only is Max not allowed to investigate on his own during the three days it will take to get the potentially damning evidence, he has to go on with Marianne and pretend everything is normal.

“Allied” boldly wears its influences on its impeccably tailored sleeves—not just “Casablanca” (though the two films not only share a key location but also include a key scene involving the song “La Marseillaise” and a climactic moment set at an airport) but any number of wartime dramas that one might find in regular rotation on TCM and several Alfred Hitchcock thrillers to boot. But "Allied" is not merely a pastiche of elements cribbed from other, better sources. The film was written by Steven Knight, whose previous credits include such smart adult-oriented thrillers as “Dirty Pretty Things” and “Eastern Promises,” and he gives viewers an intelligent and twisty story that generally plays fair with them and keeps them guessing the truth about Marianne without ever getting too contrived or convoluted (though it does contain perhaps one more red herring than it can properly digest). Zemeckis, making his first foray into WWII territory since co-writing the screenplay to the cult favorite “1941,” is, of course, justly famous for making films that push the envelope in terms of technology. While he does pull off a couple of technical tour de forces (such as Marianne giving birth during an air raid and a wild house party being interrupted by another air attack), he reminds us that he can generate just as much suspense and excitement with nothing more than a couple of people in a room together.

Because of his technical prowess, it's easy to forget that Zemeckis is also very good in getting strong performances out of his actors. Over the years, he has elicited great work from the likes of Kurt Russell (“Used Cars”), Kathleen Turner (“Romancing the Stone”), Bob Hoskins (who should have received an Oscar for his work in “Who Framed Roger Rabbit?”), Tom Hanks (“Forrest Gump” and “Cast Away”) and Denzel Washington (“Flight"), to name a few—and this is once again the case with "Allied." Making his third appearance in a WWII saga (following “Inglourious Basterds” and “Fury”), Pitt is very good as Max. He's appropriately debonair in the early scenes (James Bond himself would look upon his parachuting style with envy) and convincingly anguished later on when tormented by the idea that he is being betrayed by the woman he loves. For her part, Cotillard is pretty amazing as Marianne, bringing such depth to her characterization that we become as enraptured with her as Max is even though we are just as confused as he is in regards to her identity and intentions. She keeps us guessing throughout and the result is another knockout performance from one of the strongest actresses working today.

“Allied” is one of those movies in which everything clicks in such a precise and effective manner—including top-notch contributions from the likes of composer Alan Silvestri, cinematographer Don Burgess and costume designer Joanna Johnston—part of the fun in watching it is in seeing all of the various pieces coming together in such a seemingly effortless manner. It is a lovely homage to the kind of entertainment that Hollywood used to put out in the day without breaking a sweat, while still strong and sure enough to work on viewers who have never seen any of the films to which it pays tribute. 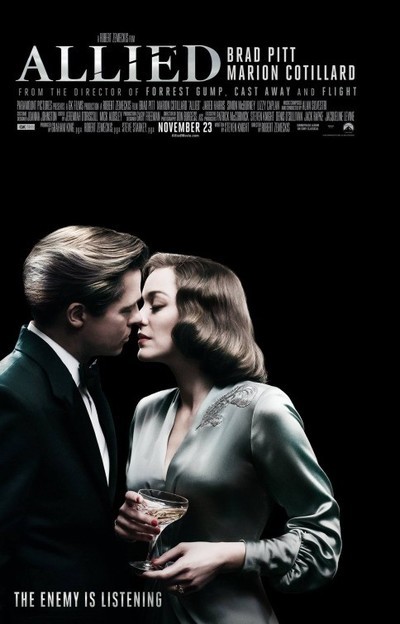 Rated R for violence, some sexuality/nudity, language and brief drug use.