Although many commentators will no doubt immediately compare the new WW II epic "Fury" to Quentin Tarantino's brilliant "Inglourious Basterds," largely because both films star Brad Pitt as a heavily-scarred, drawling Army man leading his men in a quest to kill as many Nazis as possible, it is actually closer in tone to a straightforward and un-ironic guys-on-a-mission tale along the lines of "The Dirty Dozen" or "Where Eagles Dare," with a heavy dollop of gruesome bloodletting depicting the true horrors of armed conflict that have been de rigueur for the war movie genre in the wake of "Saving Private Ryan." It may sound like an interesting approach for a modern war film, but it doesn't take long to realize that writer-director David Ayer has spent more time adding flesh to his battlefield sequence than he has in fleshing out the screenplay. The end result, while technically impressive, is a dramatically bloodless affair, despite the gallons of gore on display.

Set during the waning days of the war, with Allied forces marching through Germany on the way to Berlin and the Nazis pulling out all the stops—including putting kids into battle and hanging those who refuse to fight—to stop them. Pitt plays Sgt. Don "Wardaddy" Collier, the commander of a five-man Sherman tank crew that has been together since North Africa, and who he is determined to see survive to the end of the war. His men include the religious-minded gunner Bible (Shia LaBeouf), the Hispanic lead driver Gordo (MIchael Peña) and the borderline scumbag mechanic Coon-Ass (Jon Berenthal). As the story opens, they have just lost their second driver in battle, and at their next stop, they take on a new man in Norman Ellison (Logan Lerman), a wet-behind-the-ears type who has only been in the war for a few weeks as a typist and who has never fired a gun before, let alone served in combat.

Needless to say, the other members of the Fury crew are not impressed with the new guy and are even less so when he winds up barfing all over the place while cleaning up the blood in the cab left by his predecessor. Things get worse when Norman chokes during his first confrontation in a move that leads to the grisly death of another tank commander in their column. Eventually, he proves his mettle and begins to mesh with the team at last and Wardaddy even takes him out during a brief stopover to an impromptu rendezvous with a couple of German women (Anamaria Marinca and Alicia von Rittberg) to relieve him of his virginity. After an ambush that wipes out the other tanks that they are traveling with, Fury finally breaks down, but before it can be repaired and the five men are placed in the seemingly impossible position of trying to single-handedly stave off the arrival of 300 SS troops.

Ayer is best known for writing and/or directing such gritty cop dramas as "Training Day," "End of Watch" and this year's brutally idiotic Arnold Schwarzenegger vehicle "Sabotage," and, with this film, he takes a giant leap forward in terms of scope and ambition, but only generates middling results. When it comes to the details, Ayer excels—he convincingly evokes the look and feel of this period in history and also does a decent job of suggesting how a quintet of people who would likely never even acknowledge each other in other circumstances can forge together into a single working unit in times of duress. The action sequences are also nicely staged, with one battle in which the smaller but faster Sherman races around to fight off a larger but slower German Tiger tank offering some genuine thrills.

The trouble with "Fury" is that while stocking up on all the little details, Ayer has failed to provide much of a narrative for them to hang upon. The film may remind some viewers of the kind of thing that one might have seen on the bottom half of a double-bill in 1943—the storyline is trite and unsurprising, the dialogue is almost always just a little too on-the-nose, and the climactic standoff against the approaching Nazi forces feels too contrived for its own good. In those aforementioned B movies, that wasn't such a problem because they usually clocked out at 80 minutes or so and moved quickly enough so that viewers usually didn't notice such flaws. "Fury," on the other hand, clocks in at 134 minutes and it makes you feel every one of them in ponderous detail. (The sequence with the German women starts off nicely enough but goes on forever before finally arriving at its inevitable payoff.) Speaking of ponderous, the film is, between Steven Price's oppressive score and the cacophony of combat, so noisy that if there was an Oscar given for Most Sound, it would be the clear front-runner.

On the acting front, Brad Pitt is good—of course, he is almost always good—but never quite finds a way of approaching his character that doesn't call to mind his indelible performance as Aldo Raine in "Inglourious Basterds." Likewise, his co-stars turn in decent-enough performances (though LaBeouf's attempts to grizzle himself up via darkened teeth and an especially unfortunate mustache may inspire a few bad laughs early on), but the characters are so paper-thin and devoid of any shading beyond their one approved character trait that they aren't able to do much of anything with them to make them live or breathe. Since we have not been given any particular reason to care about these particular characters, other than the fact that they are not Nazis, the final conflict and the personal sacrifices they make wind up having precious little dramatic impact.

"Fury" isn't so much a bad movie as it is a fairly unnecessary one. From a technical standpoint, it is occasionally quite impressive and fans of the WWII genre as a whole might find it to be of some interest, though those with weaker constitutions may want to give it a second thought considering all the blood and guts on display. From a dramatic and emotional perspective, however, it just sort of lumbers along without ever generating a real sense of interest in what is happening on the scene. If only Ayer had spent a little less time on the physical aspects of this project and given a little more thought to the story, characters and dialogue, he might have been able to truly do "Fury" honor instead of giving viewers just another war potboiler. 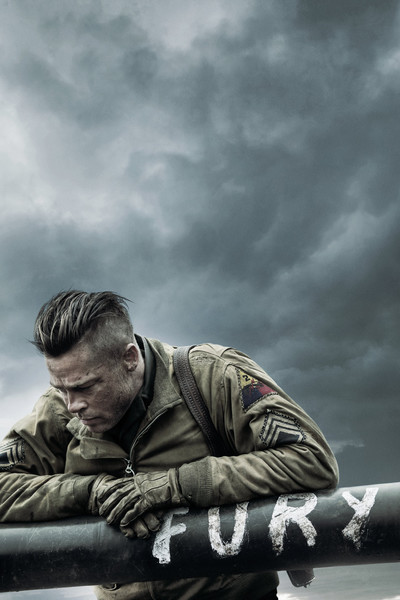