When the movie isn't manipulating cars, it does have its good moments. It involves an ancient family feud between two brothers who own competing used car lots across the street from each other. The brothers, both played by Jack Warden, have been treated differently by fate: One is rich and successful; the other is on his last legs, like the cars on his lot. Warden does a good enough job in the dual role, but I always wonder why dual roles seem like a good idea in the first place. If you want two brothers, why not cast two brothers, and accentuate their differences? Why cast one actor and settle for one tour de force instead of two undistracting performances?

Anyway, the movie's plot thickens when it appears that the rich brother will run the poor brother out of business. The plot, infact, does more than thicken, it congeals. There are so many different characters and story lines in the movie that it's hard to keep everything straight, and harder still to care.

The great comedies almost always have very simple story structures, upon which complex gags can be elaborated. Remember, for example, Buster Keaton's “The General,” in which magnificent complexities were developed out of a story that essentially amounted to Keaton driving a locomotive from point A to point B and back again. Used Cars makes the fatal error of achieving the reverse effect: Simple gags are generated out of bafflingly complex situations.

Meanwhile, back at the used car lot ... Kurt Russell plays a used car salesman who hopes to save the failing business in order to raise money for his political campaign. Gerrit Graham has some funny moments as a superstitious, sex-mad salesman. Deborah Harmon is the long-lost daughter of the less successful brother; her surprise reappearance gives him an heir just when he needs one the most.

Used Cars was written, directed, and produced by the team of Bob Zemeckis and Bob Gale, two young filmmakers who seem to be higher on kinetic energy than on structure and comedic instinct. Their first collaboration, which I really enjoyed, was “I Wanna Hold Your Hand,” a fantasy about the Beatles' first concert in New York. Their next collaboration was the screenplay for Steven Spielberg's unsuccessful 1941. Next came Used Cars. The second and third projects, in particular, are filled with too many ideas, relationships, and situations with plot overkill. And they seem to share the notion that if something is big enough and expensive enough, it will also be funny enough. 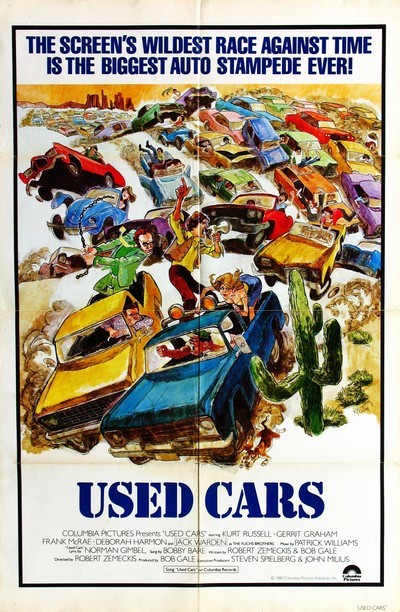 Jack Warden as The Fuchs Brothers