Rita and Ruthie are like two peas in a pod. They tag-team shoplift. They run from crisis together. They camp out in their beat-up car, eating French Fries. When they have a place to stay, they sleep in the same bed, spooned up against each other. They look like they could be sisters. But Rita is the mother, Ruthie is the 14-year-old daughter, and they are the central characters in "All We Had," Katie Holmes' directorial debut, adapted from Annie Weatherwax's 2015 novel.

Rita makes horrible choices in her life (if they can even be called choices), and she runs away when things get tough, dragging Ruthie (Stefania Owen) behind her. This is where the film starts. Mother and daughter paint a dream-life together: they will move to Boston, in a house with a pool. Stranded in a small town after their car breaks down, with no money and no place to stay, Rita and Ruthie are offered jobs at the local diner (after trying to leave without paying for their food). Marty (Richard Kind), the diner owner, and his transgender waitress niece Pam (Eve Lindley) are kind and generous, and the four create a makeshift family.

The film is narrated by Ruthie, and the overstating-the-obvious voiceover narration sounds like it is geared towards a YA audience: "Bullies exist in every small town. People hate what they don't understand." Or: "Why is life always so hard? Especially at 15?" Ruthie's voiceover is our "way into" the "point of view" of "All We Had," but there are many scenes with Ruthie not present at all. Ruthie's struggles to fit in at a new school, the ease with which she gets the approval of a Queen Bee classmate (using the tactics she learned from watching her manipulative mother), are intriguing, but dropped in favor of following Rita through her addiction and recovery issues. Rita starts to date a real estate developer (Mark Consuelos), who gets them into a house, all while Ruthie looks on suspiciously, wondering when the shoe will drop, because the shoe always drops.

Luke Wilson plays Lee, an alcoholic widower who frequents the diner. Wilson has been around for a long time now. Associated mainly with Wes Anderson's films, he has also had a wonderful career playing essentially decent stand-up guys ("The Family Stone," "The Skeleton Twins," "Meadowland.") Playing "a decent guy" is not as easy as Luke Wilson makes it look. Most actors would find these roles boring. Where's the twisty dark neuroticism actors love to revel in? Where's the "edginess"? But Wilson knows there is gold in these characters. In "All We Had," when emotions come up in him, they come like an ambush. Suddenly out of nowhere, he realizes he is about to cry and he is scared: Where did THAT come from? This feels like real life, not acting. He doesn't have a huge role in "All We Had" but in every scene he brings a quiet sense of unmistakable authenticity.

Eve Lindley is lovely as the small-town waitress who wants to move to New York, biding her time doing craft projects and putting up Youtube videos of herself lip-synching to Queen songs. She's a simple person, but she has a good heart, and she and Ruthie become best friends in a way that is wholly believable. Holmes was very smart in her casting choices throughout. Even secondary or one-off characters are well cast.

It is obvious why Holmes would want to play a character like Rita, an irresponsible and reckless child-woman. Rita could still be deemed pretty if you ignored the rough skin, the missing molar, and the panicky eyes smudged around with blue liner. For the most part, Holmes avoids the condescending traps inherent in such a role, and plays it straight. Owen, who was so wonderful in "Coming Through the Rye," is very good here, too, especially when Ruthie feels protective of her mother, giving her mother's bad choices the side-eye, knowing how it all will turn out.

The adaptation (by Josh Boone and Jill Killington) lacks any inference, mystery, or discovery: it is all text. Any complexity that there may be is all on the surface. Problems are easily solved, since there's nothing left unsaid, or if something is left unsaid Ruthie says it for us in the voiceover. This makes for predictable viewing. "All We Had" feels like episodic television of the 1980s/90s variety. The words "It's all going to be okay" (and variations thereof) are said so often I lost count. Having every emotional scene include the words "Everything's going to be okay" lessens the tension almost totally. "All We Had" takes place in a high-stakes economically devastated landscape, where everyone struggles with money and addiction and survival. The economic crash is so brutal that even Ruthie feels it, riding her bike past empty storefronts. But "All We Had" tiptoes back from that abyss.

Even artists have a way of keeping things low-stakes for themselves if they're not rigorous about it. With her well-meaning desire to create an inspirational story of survival and redemption (and, to be fair, she has succeeded), Holmes has kept the entire film extremely low-stakes. You never doubt for one second that "everything is going to be okay." 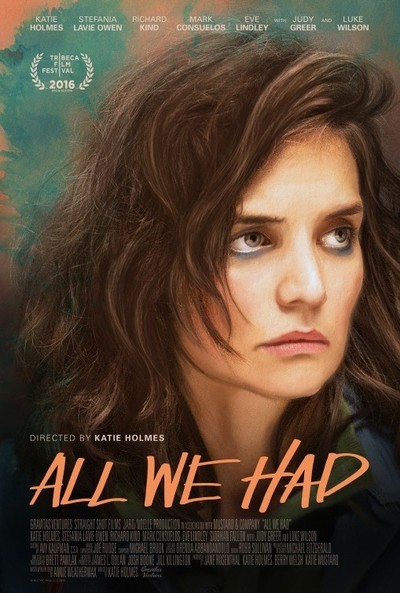