“Meadowland” hinges on an inciting incident so horrifying that it’s really unfathomable to imagine, even for those of us who have children. Conveying a grief that most people will never have to endure can be a difficult task for a filmmaker, and they often fall back on over-telling such stories, making sure every line of dialogue and every shot selection drips with pain. Such is the case with Reed Morano’s directorial debut “Meadowland,” a film with two very strong central performances from a pair of underrated actors that falters by being so self-aware of the tortured existence it’s attempting to capture. In the end, it feels like Morano didn’t trust her actors quite enough to be the conduits of emotion, falling back on too many filmmaking and screenwriting tropes that hamper the realism of their work.

Sarah (Olivia Wilde) and Phil (Luke Wilson) pull over at a gas station in the opening scene of “Meadowland.” Their son goes into the bathroom and doesn’t come out. There was a door in the back of the restroom leading to the garage, the street, and the rest of the world, and he’s gone without a trace. As a father of three, even writing that sentence sends chills up my spine. I can’t imagine the pain. And “Meadowland” wastes no time jumping into that bottomless well. This will be a movie about grief. This will be a movie about suffering.

“Meadowland” jumps forward a year to reveal Sarah and Phil quietly imploding over the disappearance. They try to go about relatively normal lives—Sarah is a teacher, Phil a cop—but the lack of resolution seems to be one of the most haunting elements of daily life. They can’t even bury their child. And cops come with pictures of children found on the internet or in raids and ask if it’s their son. Sarah refuses to even look anymore, while Phil seems to hold out a glimmer of hope that he’ll be found.

Sarah also happens to be a teacher, a far-too-convenient storytelling device for Morano. In an early scene, her students are reading poetry about how your eyes adjust to the dark—“You don’t know when it’s going to be light again. It might just keep getting darker.” This kind of self-aware scripting pops up again and again in “Meadowland.” The movie actually works best when Sarah and Phil are silent, as Morano, a cinematographer by trade who also shot this film, captures the gloomy, overcast existence of two people living in misery. The problems lie in Chris Rossi’s over-explanatory script, which almost seems to be pushing and pulling with Morano’s more dreamlike visual style and emotional skill with the actors.

Even the structure of “Meadowland” can be frustrating, as we watch Sarah get closer to a student with Asperger’s who is clearly unloved by his parents and bullied at school. The idea that a teacher would be drawn to a surrogate son after losing her own is a fascinating one, but Rossi handles it in a clunky fashion, not really conveying what Sarah thinks she’ll get out of the relationship. Similarly, Phil meets a man (John Leguizamo) at a support group who has a dark story of his own. Like the Sarah arc, it’s a narratively frustrating element from the film's too-literal melodrama.

Despite those frustrations, “Meadowland” is ample proof yet again of the underutilized talents of Olivia Wilde and Luke Wilson. Wilde has a way of breaking through the overwritten dialogue to find the truth. Her quiet moments in the classroom, lost in near-suicidal thought, say more about Sarah’s arc than any line in the film. Despite her striking beauty, she seems to be folding in on herself, unable to live in the cruel world. She wears a hoodie, acting look like the air hurts her skin. Wilde is great here, and she’s matched by Luke Wilson, another actor who seems to be getting more confident and interesting with age. They’re the reason to see “Meadowland,” and nearly rescue the piece from the melodramatic swamp into which it eventually sinks. 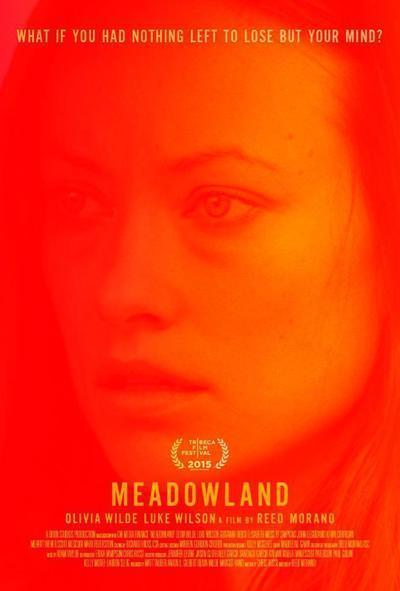 Rated R for language, a scene of strong sexuality and some drug use.