As I’m writing this review of “The Skeleton Twins,” I have Starship’s sparkly, glossy pop tune “Nothing’s Gonna Stop Us Now” stuck in my head. It’s probably stuck in yours now, too, and for that, I sincerely apologize.

Originally the theme to the 1987 romantic comedy “Mannequin,” this relentlessly optimistic No. 1 hit makes a crucial appearance in a very different way in “The Skeleton Twins.” But before you cringe at the very prospect of hearing it again, just hear me out. Director and co-writer Craig Johnson uses the song so surprisingly and beautifully, you actually won’t mind. Actually, you'll have an enormous smile on your face.

It’s one of many examples of how Johnson and co-writer Mark Heyman take clichéd notions, upend them, breathe fresh life into them and make them feel excitingly new. That Starship song comes in the form of a spirited lip-sync between Bill Hader and Kristen Wiig, who co-star as estranged twins fumbling to reconnect. They also get high together–a classic shorthand for breaking the ice and bonding in films–and they dress up in drag for Halloween.

We’ve seen countless uses of these devices and too often they seem wacky, forced and flat. In “The Skeleton Twins,” an off-kilter sense of humor, as well as a pervasive feeling of loneliness and regret, provides a more complex and far more human vibe.

Wiig and Hader co-star as Maggie and Milo, twins who live across the country from each other and haven’t spoken in a decade. She stayed in their hometown of Nyack, N.Y., got married and became a dental hygienist; he moved to Los Angeles with dreams of becoming an actor but instead works as a waiter. Their father committed suicide when they were 14. Their mother (Joanna Gleason in a brief but amusingly zany appearance) is a selfish self-help guru.

But despite the time and distance that have divided them, they’re still eerily in sync, and on the brink of self-destruction. The only thing that stops Maggie from swallowing a handful of pills at the film’s start is the phone call from a hospital informing her that Milo has just tried to kill himself.

She flies to L.A. and offers to bring him home with her, hoping that this will provide him with some stability. But obviously, she’s in need of some herself. “The Skeleton Twins” follows the process as Milo and Maggie learn to restore themselves by returning to each other. Again, it probably sounds very familiar–like “You Can Count on Me,” with an even more twisted sense of humor. But there are obstacles and twists on the road to recovery–and lies, and secrets, and baggage.

Maggie appears to be happily married to Lance (Luke Wilson), an overly eager and earnest nature lover who never quite gets the siblings’ jokes (which makes them even funnier). Wilson finds the tricky balance of playing an ebullient and optimistic type without overplaying it, and the filmmakers were smart to portray him as an abidingly decent dude when it would have been safer to make him a joke or a jerk.

Milo, who’s gay, can’t help but track down the man with whom he had a scandalous affair when he was much younger (Ty Burrell in a small and slightly underdeveloped role). Hader finds his own tricky balance in playing the character in an effeminate and sarcastic way without ever going over the top into flamboyance or camp.

Fundamentally, though, Wiig and Hader make this work together through their tremendous chemistry–something you’d expect, given that they were longtime “Saturday Night Live” castmates and are good friends off-camera. (I half expected an episode of "The Californians" to break out at any moment.) But this movie asks a lot of them. It asks them to navigate territory that’s both funny and dramatic, light and raw, goofy and brutally honest. And they do it spectacularly. We’ve seen Wiig handle heavier material while still playing to her comic strengths in movies like “Bridesmaids,” and she does so deftly here, as well. But Hader is just shockingly great. His performance is reminiscent of some of Robert Downey Jr.'s early work, with his ability to rattle off a wry, biting one-liner and still remain lovable, or to ooze bravado and vulnerability in a single breath.

As we enter this season of big, important awards contenders that “matter,” “The Skeleton Twins” is a small, intimate gem that might truly matter. 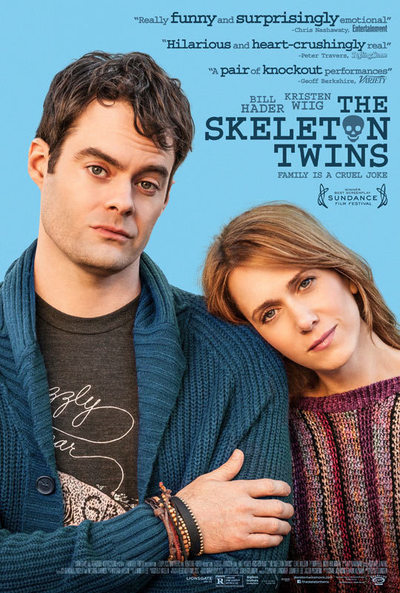 Rated R for language, some sexuality and drug use