Regardless of how far removed you might be from your teenage years, also known as the agony-filled era of pain when the world is both your oyster and your enemy, you probably remember at least one thing about it: time never seemed to pass fast enough back then. Days felt longer. A school year just seemed to not end, and summer never arrived quickly enough. Jenny Gage’s deep, shrewd and beautifully realized documentary “All This Panic” is anchored in this very nature of time in the way teenagers generally relate to it. Its every dreamy scene, filled with worthiness and merit, is plugged in to an in-the-moment feeling that accompanies a group of young Brooklyn-women the film follows over a three year-period. No wonder the lean, 79-minute running time of “All This Panic” is not a liability: Gage makes each minute boldly and deeply matter.

“All This Panic” was conceived when debuting director Gage and her husband Tom Betterton, the cinematographer of the film, met Ginger and Dusty, two teenage sisters living in the same Clinton Hill neighborhood. After getting to know the two sisters and observing their evolving teenage lives, the couple slowly found themselves inside the circle of their friends, among which is Lena, Ginger’s best friend, one of the strongest and most present voices within the group and in the documentary. An aspiring philosopher with family troubles, she recalls the time she casually found out one day that her parents were getting a divorce, during a family viewing of “Avatar: The Last Airbender.” It left a mark on her.

Then there is Sage, a brainy student who attends a high-status private school in Manhattan, raised by a single mother with whom she has a close relationship. The only black teenager among the group portrayed in the film and an outspoken feminist who complains about the over-sexualized female body, Sage seems to have figured out the lose-lose way women are ruthlessly categorized in society based on their looks. We also get to meet Olivia, a kindly, soft-spoken young woman who’s just figuring out her sexual identity. She candidly but ever so shyly speaks of her sexual leanings and doubts while being filmed, though she notes she hasn’t yet shared it with anyone close to her. The last two members of the circle are Delia, Olivia’s best friend who seems to detest “all this panic” with regards to high school (one example is her friends frantically trying to pick the right outfit for the first day of school), and the savvy and resourceful Ivy.

The method of filming the girls over a three-year period might inevitably bring to mind Richard Linklater’s “Boyhood,” in which he told the fictional life story of a Texan boy over a 12-year-period, using the same actors throughout. Linklater’s accomplished narrative feature isn’t quite an apt comparison for “All This Panic” however, since the girls’ evolution in front of the camera—from changing hairstyles and colors to budding ideals and growing frustrations—is an organic process, which Gage and Betterton lovingly observe without interference. If anything, the fleeting sense we get from the passage of time in “All This Panic,” the lack of pretension between friends and the general hazy feeling stretched over the collective angst of the seven teenagers loosely resembles David Robert Mitchell’s “The Myth of the American Sleepover” instead, a recent-ish and under-seen narrative that also deals with teenage anxieties and troubles. We quietly survey as sexualities bourgeon, personalities develop and get between longtime friendships, and curiosities spark in this unusual coming-of-age film, edited and assembled with understated grace.

Throughout “All This Panic,” Gage and Betterton’s professional background in photography luxuriously shows. In one of the film’s earlier scenes, we watch Dusty and Lena converse and quarrel on a picturesque beach; an incident shot with artistic framing that evokes a sense of melancholy. The duo consistently treats less visually appealing environs with the same discipline, making brick walls, cramped interiors and rundown rooftops seem intentional and beautiful creative choices rather than obligatory backdrops. In the end, what they achieve is both meaningful and strikingly beautiful, full of that boundless hopeful mystery one feels at maximum during teenage years. 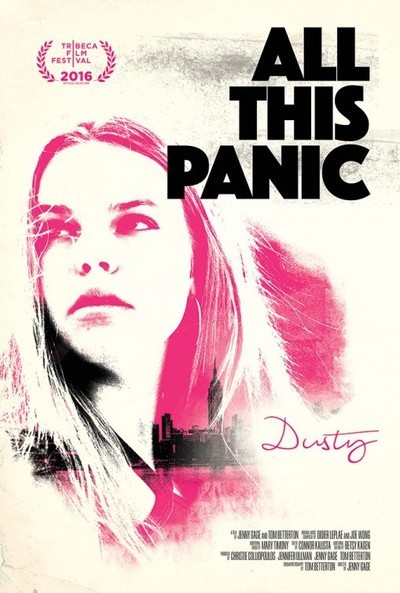