Ridley Scott’s dazzling “Alien: Covenant” is set ten years after the events of “Prometheus” and is a direct sequel to it, bridging the gap between that film and the original “Alien.” The story kicks off with an accident on board the Covenant, a colony ship headed for a paradise planet. The chosen captain, Jacob Branson (played in a one-scene flashback—puzzlingly—by James Franco) dies in hypersleep, leaving behind a grieving wife (terraforming expert Daniels, played by Katherine Waterston), a weak second-in-command named Oram (Billy Crudup) who’s now unfortunately seated in the captain’s chair, and 2000 still-sleeping colonists and frozen embryos. Fassbender, who played the android David in “Prometheus,” is on board the Covenant playing Walter, a next generation version of the character. The emotions and personality of this one have been dialed back a bit.

The awakened crew are shaken, demoralized and still far from their destination, so when they hear a distress signal coming from a nearby planet that seems habitable, they decide to take a leap of faith and head there rather than go back into hypersleep and risk death again. And they all live happily ever after in a land of rainbows and unicorns. Just kidding! They end up trapped on a rainy planet filled with creatures that want to eat or impregnate them.

They’re momentarily rescued by David (Fassbender again), who settled there after the bloody climax of the first film and now has long hair, a Jedi robe with hood, and a sullen and grandiose demeanor. He lives in the ruins of an ancient city originally colonized by the Engineers from “Prometheus.” Daniels, who is determined to realize her late husband’s dream of building a cabin by the edge of a lake, went along with Oram’s plan to detour to this new world, but now feels trapped and hopeless. So do the other colonists, some of whom have ingested spores that will gestate into xenomorphs.

If this sounds a bit like a variation on the plot of every “Alien” film ever, that’s because it is. The series’ repetitive structure is a feature, not a bug, as in the James Bond, "Star Wars" and Marvel franchises. If you don’t like them, you can complain that they recycle the same images and situations. But if you like them, you can compare them to sonatas or sonnets or three-chord pop songs, where part of the fun lies in seeing what variations the artists can bring while satisfying a rigid structure. The ritualized beats of the “Alien” movies offer many such scenarios, including initial landing on the dark planet, the first alien attack, the realization that a character that you thought was part of the team is actually treacherous, the escape from the complex that’s about to be wiped out, and the second ending that happens when you thought the story was over.

This one has a lot of nifty variations, most revolving around Fassbender’s dual performance. The film starts with a flashback prologue showing the android David in conversation with his creator, technology magnate Peter Weyland (Guy Pearce, who acted the role in old age makeup in “Prometheus”). Alert viewers will realize that the movie wouldn’t start with a flashback to David’s creation unless it intended to bring him back in later. His entrance is delayed (perhaps too long, though your mileage will vary), but once he’s in the story, saving the wrecked colonists from an unrelenting, expertly choreographed attack by xenomorphs in a field of tall grass, Fassbender gets numerous chances to act against himself, via digital compositing so subtle that we forget we’re seeing effects.

And it’s in these scenes, thoughtfully written by John Logan and Dante Harper and gracefully acted by Fassbender, that we realize that this movie is not merely a bridge between the “Alien” films and “Prometheus,” but between the “Alien” films and “Blade Runner” as well. The David-Walter relationship differentiates “Covenant” from all other “Alien” films. It gives it a beating heart as well as an endless source of humor that’s often dry and occasionally self-aware, verging on campy. The highlight is a marvelous scene, done with a laterally moving camera and no cuts, where David suggestively teaches Walter how to play the flute. It’s charged with hilariously amped-up homoerotic energy, but it’s also a joke on actor narcissism: this is a rare movie where the star gets to seduce himself.

As in all of the “Alien” films, characters do tremendously stupid things with such regularity that you pretty much have to stop judging the movie by real-world logic. Instead you have to judge it by the standards of a fever dream or nightmare, a Freudian-Jungian narrative in which the thing you fear most is what happens to you, and where you’re doing stuff like going to work naked or trying to climb across the face of a skyscraper or accepting someone’s invitation to look into, say, the sticky maw of a xenomorph egg that just opened (the latter actually happens in “Covenant”).

The atmosphere inside David’s city of the dead encourages that sort of viewer engagement. It’s one of the great sets in horror movie history, up there with the refinery vessel in the first film and the infested colony in the second. The medieval look of the place (it seems to have been carved from volcanic rock by laser) drives home that “Covenant” only looks like a hard sci-fi film about technology and rational thought. In its heart it’s more of a dark fairy tale about destruction and creation, death and birth, parents and children (biological and figurative), and sexual violation and monogamous love (many of the crew are married, including a crowd-pleasing couple played by Danny McBride and Amy Seimetz).

The necropolis is where David devises new life forms and tantalizes Walter by insinuating that he’s missing out by failing to evolve, as David has been able to do. He’s a Frankenstein’s monster who has, over time, become a version of Dr. Frankenstein (in effect becoming his own “father,” Weyland). His dubious achievements include delusions of godhood. But there’s ultimately more of Shakepeare’s exiled sorcerer Prospero in the character, as well as echoes of Caliban, the hideous and jealous son who, like David, is obsessed with impregnating the humans he despises so much. (In Shakespeare’s play, Caliban declares, “Thou didst prevent me; I had peopled else/this isle with Calibans.”)

Scott, production designer Chris Seagers, and conceptual artist Dane Hallett borrow from H.R. Giger and Ron Cobb’s founding designs as well as embellishments seen in later films, but there are also echoes of 1930s Universal monster movies ("Bride of Frankenstein" especially), Jean Cocteau’s "Beauty and the Beast," and the work of Guillermo del Toro, whose films are often so filled with drawings, sculptures and ancient texts that they feel like meditations on creativity. Aside from being a fascinating character in his own right, David is a stand-in for Scott, who will forever be at once the son of the many cinematic parents who nourished his imagination, anxious to prove himself their equal; and the father who brought a new substratum of science-fiction film into existence almost 40 years ago and then stood by for decades, watching it subsume and devour the genre before returning at last to reclaim it.

I Ioved this movie so much that its flaws—which include a cannon fodder sameness in the minor characters and a failure to develop the religious dimension laid out early in the script, except as it relates to science—barely registered. “Covenant” has its own personality and rhythm, a remarkable achievement considering how many “Alien” films have been made over almost four decades. And it touches on so many of the recurring obsessions in Scott’s long career (he turns 80 next year) that it feels like a summation of everything he’s about. The macho Ridley Scott, the unexpectedly tender Scott, and the maker of Biblical epics, conspiracy thrillers, fables, and eye-candy advertisements, are all represented here.

This is one of Scott’s best-directed movies and one of his most entertaining overall, partly because he’s working in a genre, the science fiction spectacle, that he does better than anyone since Stanley Kubrick, but also because he seems to be approaching it almost entirely in terms of visceral impact and emotion—as symphony of fire and blood, poetry and schlock. The best sequences (in particular the spore infestation that brings us inside an ear canal, the first attack in the grass, the flute scene, the flashback revealing the city’s destruction, and the escape from the planet) put nearly everything else being done in science fiction or fantasy at this budget level to shame. It’s rare to see such a combination of technical mastery and wicked joy in a film by a director who’s been working as long as Scott. This is the third best “Alien” movie after the first two, but don’t be surprised if repeat viewings kick it up a notch. 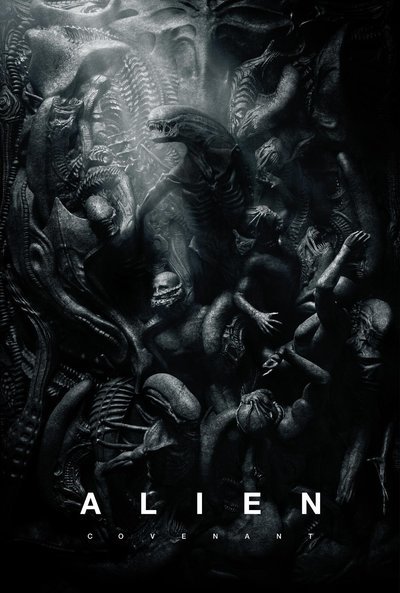