In my bio here on our beloved site, I profess a love for Blaxploitation films. Unfortunately, I couldn’t muster any affection for “Alice,” an absolutely awful attempt to use the genre’s tropes to merge a female empowerment story with a checklist of what writer/director Krystin Ver Linden thinks are symbols of Blackness. If this film were a person, it would tell you it had a Black friend and voted for Obama twice. That’s how insultingly simplistic it is about race. It is also so skittishly afraid to offend that it borders on parody; this is a film where enslaved African-Americans are referred to as “domestics” instead of the words you know damn well they would have been called by the plantation owners.

One of those “domestics” even provides the clichéd “hmmmmmmm-HMMMMMMMM!” Black lady humming on the soundtrack. We usually don’t get to see this singer onscreen, but her purpose is always to underscore Black suffering. This time, she’s humming away as she sweeps the porch of the master’s house. The dead body of a man who attempted to escape is in the background, partially blurred so as to rob the image of any power. Paul Bennet (Jonny Lee Miller) commands that his cook, Alice (Keke Palmer) look at the deceased man. This is what happens when you’re not loyal, he warns. Bennet has taught Alice to read so she can read to him every Sunday before he rapes her. Mercifully, we’re spared having to sit through scenes of sexual assault.

We do, however, get to see Alice beaten, dragged, and hogtied to a pole before put in a hideous facial contraption. Just before releasing her days later, Bennet pisses in her face. We get to see that, too. However, Ver Linden’s camera gets shy when, in retribution, Alice shoves a broken piece of glass into her enslaver’s eye before escaping. It’s a premonition that the righteous Black revenge the trailer promised is going to be profoundly dissatisfying. “Alice” is not concerned with African-American viewers sick and tired of slavery scenes and downtrodden narratives. Instead, it’s unwilling to upset white viewers who consider themselves racial allies. A movie like this should unapologetically provoke their discomfort. It would have if it were made in the year it takes place.

If you’ve seen that trailer, you know that Alice’s escape culminates with her running right into a paved road. The movie is 40 minutes old before she is almost crushed by a truck driven by Frank (Common). This scene is so ineptly filmed that any shock of Alice suddenly discovering a highway during slavery times is lost. It’s revealed that we’re in 1973, the year of Tamara Dobson’s Cleopatra Jones and Pam Grier’s Coffy. Frank’s reaction to Alice defies belief. Here’s this bloodied woman, dressed like Kizzy from “Roots” and freaking out because she’s never been in a truck before. She doesn’t know what year it is and she pukes on his seats. Frank isn’t the least bit concerned. Perhaps she has amnesia, he assumes.

This leads to an emergency room scene with a hilarious, inept cameo by the kind of blonde nurse you’d find in a hospital run by Roger Corman. She sentences Alice to a 72-hour psychiatric evaluation before Frank helps her escape. “They’ll drill holes in your brain!” he tells her. The two leads have zero chemistry, and they’re forced to utter such atrocious dialogue that you feel sorry for them. Palmer gives it a game, respectable attempt, but Common gives the worst performance of his career. At first, I thought they both looked like they’d been forced to appear in this movie. Then I saw that they were the producers.

Every scene in “Alice” raises questions that obliterate one’s suspension of disbelief. Ver Linden’s inability to build either section of the film’s universe dooms the movie. She strands her actors, never once allowing them three-dimensions nor anything that resembles common sense. The modern day slavery angle is not only unexplained but a ripoff of “Antebellum.” That film was far more vile but also more believable. And that’s the movie with the slavery amusement park! An opening title says “Alice” is “inspired by true events,” that catch-all phrase that gets dragged out when the filmmakers want you to buy some unsellable nonsense.

The Blaxploitation-inspired second half is exponentially worse than the first. Alice finds Frank’s memory box, revealing that he was once a Black Panther. She also finds all these books on Black empowerment, which she reads as quickly as Johnny Five, the speed-reading robot from “Short Circuit.” While she gets educated, the film shows a montage of people like Malcolm X and Angela Davis. The clips are out of context and are therefore useless as anything other than fetishistic lip service. In one afternoon, Alice becomes radicalized and, after freaking out over the telephone’s busy signal, becomes an expert at dialing every name in the phone book that sounds like her oppressors. Thankfully, racists who are hiding Black people and using them as slaves have listed numbers.

Alice also finds magazines with Pam Grier and Diana Ross on the covers. She’s inspired to give herself a fantastic, enviable Afro not by Ebony or Jet Magazine, but by Rolling Stone. When Frank takes her to see “Coffy,” she decides to return to the plantation to exact revenge. Meanwhile, wah-wah guitar, Stevie Wonder, and old soul protest songs blare on the soundtrack, doing everything they can to convince us we’re in a Blaxploitation movie. Not even a genius like Stevie can pull it off.

After what seems like an eternity, Alice returns to face Bennet. I won’t spoil the climax for you, but I will say that Coffy, Foxy Brown, and Cleo Jones would have all been more ruthless than Alice is. Despite seeing a Blaxploitation film before embarking on her quest, she learned nothing about how they work nor what they’re about at all. The makers of this worthless piece of trash didn’t learn that either. 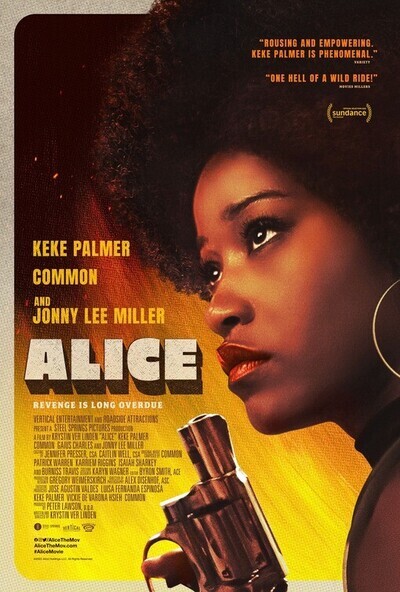