By now, you've probably read the news: Norma McCorvey, aka "Jane Roe," the plaintiff in Roe v. Wade, made a "death-bed confession" on camera, at the end of Nick Sweeney's documentary "AKA Jane Roe." She reveals she was paid to be a spokesperson for the pro-life movement, after famously switching sides from pro-choice. What had been touted as spontaneous, born of McCorvey's remorse as well as accepting Jesus into her heart, was actually bought and paid for. McCorvey was weaponized by pro-life groups, and still is, so much so that Operation Rescue's Philip "Flip" Benham—who baptized McCorvey in a swimming pool—gave a rousing political speech at her memorial service. In the final scene of "AKA Jane Roe," a near-death McCorvey is asked if she felt she was a "trophy" to the pro-life movement, and she says, "Of course. I was the Big Fish. I took their money and they took me out in front of the cameras and told me what to say ... I’m a good actress. Of course, I’m not acting now.”

Which is the true Norma? The young woman who agreed to let two lawyers use her experience as an example in their court case? The young woman who—let's not forget—never got an abortion, not then, not ever? Or was McCorvey the advocate, working in an abortion clinic? Or was she the repentant McCorvey, speaking at memorials for the murdered unborn? You can't blame people for being conflicted about her flip-flops.

The conflicted nature of the story makes "AKA Jane Roe," filmed over the year leading up to McCorvey's death in 2017, a fascinating experience. The interviewees who are rock-solid in their convictions don't come off well. Often, these are the same people who used McCorvey for their agendas, whether pro-choice or pro-life, who tossed her aside when she veered from the planned narrative. In "AKA Jane Roe," it's the conflicted ones, the ambivalent ones, the pained ones, at the center, and Sweeney is to be credited for his interviewing chops. For the most part, the interview subjects are honest, especially when they're "telling on" themselves.

There's Charlotte Taft, the abortion activist, who says, bluntly: "[McCorvey] was not the poster girl that would have been helpful to the pro-choice movement." It's a hell of an admission. In 1989, 300,000 protestors gathered in Washington D.C. to march for abortion rights. A parade of celebrities—Jessica Lange, Whoopi Goldberg, Gloria Steinem—made speeches. McCorvey, present, no longer anonymous, was not invited to speak. These middle-class women didn't know what to do with a trash-talking working-class wild card like McCorvey. Famous attorney and women's rights advocate Gloria Allred, interviewed for the documentary, saw how McCorvey was being sidelined and swooped in, thrusting McCorvey into the spotlight. When McCorvey admitted spontaneously in an interview that her pregnancy wasn't the result of rape after all, everything changed. It was seen, understandably, as a betrayal, as well as threatening the existence of Roe v. Wade. To her credit, Taft admits that the plaintiff in Roe v. Wade wouldn't have come from their middle-class ranks anyway, she wouldn't have been a nice girl with a college education—and this admission shows the class blindness so present in mainstream feminism.

Sweeney captures McCorvey's rambunctious humorous personality. There are surprises, like McCorvey reciting the entirety of Macbeth's "Tomorrow and tomorrow and tomorrow" soliloquy as she is wheeled around a public park. He also interviews two important figures on the evangelical right. There's Flip Benham, a frankly charismatic wolf in sheep's clothing, a snake-oil salesman if ever there was one. He targeted McCorvey early, setting up an Operation Rescue office next door to the abortion clinic where McCorvey worked. His tactical patience worked like a charm. McCorvey found the belonging in the pro-life movement she hadn't found in the pro-choice movement. In order to understand this, you'd need to walk in McCorvey's shoes: not wanted by her parents, neglected and abused, sexually molested by a relative, tossed to the wolves at a very young age. Is it any wonder that she would have soaked up the attention of a group who embraced her wholeheartedly, supporting her financially? And now we know she was paid to be there. Can she be blamed for wanting that money? The cost, though, was her relationship with Connie, her partner of many decades. Benham forced "Miss Connie" and "Miss Norma" (as he calls them) to end their relationship. It's heartbreaking.

The crucial interview is with Reverend Rob Schenck, who stood at her side at those pro-life events, who now, with admirable honesty, expresses ambivalence and even horror at what he did to her. Excepting McCorvey and Connie, he is the most heartfelt presence onscreen: "We were playing her. What we did with Norma was highly unethical."

In the opening sequences of "AKA Jane Roe," Sweeney uses re-enactments to portray different events in McCorvey's childhood and young adulthood. They aren't particularly well-done and add nothing to the story (especially since the device is dropped early on). We don't need to see a hand picking up a phone at the same time someone says, "The phone rang." The breathless, cliffhanger-tone set up in the first scene—where McCorvey announces she has a "death-bed confession"—is also unnecessary. The information is explosive enough to stand on its own.

In general, McCorvey's story is well-known. "AKA Jane Roe" brings us into the battles behind the scenes, and allows us to get to know the woman at the center of it. What she did and why she did it will continue to be argued over.

But, as her taciturn life partner, Connie, said, even with Norma's pro-life activities, "She saved a lot of women. She will always be Jane Roe."

Premieres on FX on 5/22, and available on Hulu the next day. 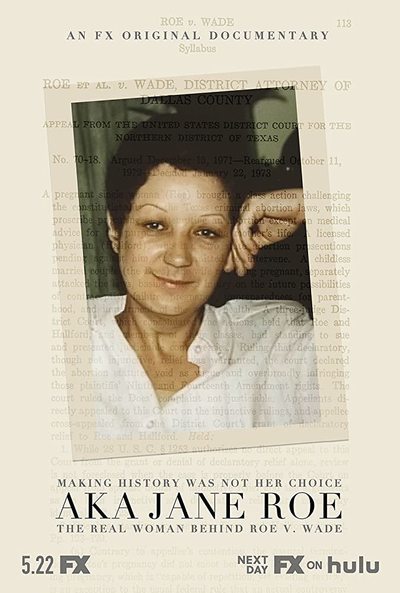 Norma McCorvey as Self

Andy Meisler as Self

Charlotte Taft as Self

Flip Benham as Self

Rob Schenck as Self