There’s very little that’s surprising in Alex Gibney’s compulsively watchable election hack documentary “Agents of Chaos,” and that’s a feature, not a bug. The sense of foreign meddling in American affairs doesn’t need to be all that secret or covert, in part because it’s not all that clever. It can be as direct as Trump saying to the camera in 2016, “Russia, if you’re listening, I hope you can find the 30,000 emails that are missing.” It’s all happening right in front of us. But in place of anything startlingly new, Gibney and his team offer refreshing cohesiveness, vivid hindsight, and imperative journalism. It’s a detailed look at how Russia unmistakably influenced the election in 2016, but also a warning that it wasn’t just hackers and bots who were a part of the discord.

Even though the two-part series was made with an extensive group of collaborators (including co-director Javier Alberto Botero in part two), “Agents of Chaos” feels first-person, as Gibney tries to wrestle with America’s broken sense of trust in the institution of voting, and the nation in general. He once made an entire documentary about how Lance Armstrong lied to him (“The Armstrong Lie”), all for the sake of trying to understand why—this is a filmmaker who knows that winning cheaters still own history. “Agents of Chaos” is of the same ilk, with one of our best documentarians grappling with a nation’s ideological vulnerabilities, trying to understand how Russia used our chaos against us.

Part one of this two-part series (airing across two nights on HBO), begins with the recent history of troll farms, dating back in 2013. Speaking with people who have investigated these enterprises like Camille Francois, or acted in part with them, Gibney and his crew paint a vivid picture of a disruption service that was initially effective in 2014 in sowing discord in the Ukraine. Doctored images, fake news, memes that accuse the enemy of Naziism, the different attempts by coordinated trolls worked, and they were coming from an office building in Russia. “Agents of Chaos” goes deep into this history, including the Russian figureheads who supported the programs. And with its numerous examples of fake online accounts, it shows how these different efforts worked on a vulnerable country even more divided. “Agents of Chaos” creates a vivid new enemy for us to watch out for—fake profiles who churn out memes and easily gain followers. If “Agents of Chaos” can inspire viewers to be more mindful of whether they’re posting a meme from a bot, that’s no small feat.

After a large section on “Trolls,” part one then goes into “Hacks,” an informative part about Russia’s hacking groups (like Fancy Bear), and the damage they did to America in 2016. In particular, Clinton campaign chairman John Podesta shares how his email was hacked (a fake password request), and the documentary explores how the target was America’s trust, playing upon a divisiveness that was already in America. Both right-wing people and liberals were targeted by fake groups who hoped to sow that divide. Paired with fake social media accounts, the hacking was full-court press to inspire people to not to vote, and to lose faith in the Democratic candidate.

There is a great deal more to this documentary, and it's heartening to see it all treated with a vital sense of nuance. That’s not a term the discourse has often been treated with, manifested in the likes of Robert De Niro’s desperately hagiographic portrayal of Robert Mueller in “Saturday Night Live,” a projection of desires for justice. But especially in part two, Gibney’s documentary grapples with such complicated subjects as the Mueller Report, or the Steele Dossier in an honest sense, creating a larger sense as to why they would be productive toward clarity in some ways, and flawed in others. The same goes for how the documentary tries to side-step the term collusion, and instead talks about how the meetings between Trump campaign officials like Paul Manafort with Russians was more like “seduction,” and that we’ll never have a document proving the two parties’ outright interest to conspire because people simply don’t conspire that way.

Instead, the documentary details a timeline with plenty of suspicious power plays, of Wikileaks drops timed with other actions, or of friendships between Trump figures and shady Russians. It’s a strong example of a documentary making sense of a story we might know only in pieces, and will only know in that way, as connected by experts like former deputy FBI director Andrew McCabe and eyewitnesses who speak clearly about these known interactions, or trends in mob-like behavior. No direct accusations are made, of course, but the associations are horrifying and telling all the same.

Throughout, “Agents of Chaos” benefits from a clear mind: it's not about blaming one side, but showing a failure across the board with hopes that we can do better. And in a larger sense, Gibney’s constant attention to the people at the center of his expansive sagas proves especially vital when talking about people who knew something was wrong, but that they did not act. Or those who influenced the election at home, as with how McCabe talks about the FBI’s own part in swaying poll numbers days before November 9, 2016. There are no easy answers; there were some big mistakes. Part of that inaction from election officials and even the Obama administration lead to more problems. Maybe we were already on our way.

“Agents of Chaos” is a great summation of Gibney’s strengths as a filmmaker. Its reporting puts a spotlight on shadowy troll farms like he did with Scientology for “Going Clear: Scientology and the Prison of Belief,” and it tactfully explains and elaborates on a massive web of people and nutty events like with “Enron: The Smartest Guys in the Room.” It can also be in-your-face stuff, befitting the madness: the doc can be as brash as the arena rock version of “Rhapsody in Blue” that bookends each episode. And sometimes Gibney chimes in to help guide the viewer, with a voiceover is relatable (he too is befuddled by why Trump keeps playing “You Can’t Always Get What You Want” at his rallies) or corny (Gibney can’t resist a “From Russia with Love” reference).

But “Agents of Chaos” reminded me most of another director—this is essentially Gibney’s own “Fahrenheit 9/11,” an all-encompassing alarm for an election year. It wants your awareness, and throws so much into the mix with the greatest hope that you'll be more prepared for the coming weeks. Your vote deserves it. 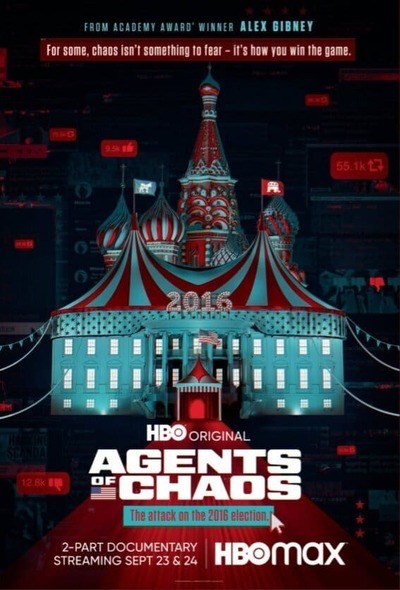