Sometimes, a new film gets a relevancy boost from its similarity to recent events, or an echoing—conscious or unconscious—of a certain national mood. “After Blue (Dirty Paradise)” gets it from a needle drop. French director Bertrand Mandico’s new exercise in psychedelic sci-fi maximalism has a villain called “Kate Bush,” whose name is repeated about a hundred times over the course of the film. And it just so happens to be hitting American theaters the same week as the real Kate Bush notched an unexpected #1 on iTunes after the use of “Running Up That Hill (A Deal with God)” in the 2022 season of “Stranger Things.”

Now, if some algorithmic confluence of keywords leads a newly minted Kate fan to “After Blue,” the film isn’t going to teach them anything about the “Wuthering Heights” singer. If anything, it actively confuses the issue, making its ”Kate Bush” (Agata Buzek) —a.k.a. Katarzyna Buzowska—a rogue vigilante with an eyeball in her vagina who wreaks havoc on the title planet after a teenager named Roxy (Paula Luna) digs her out of the pink, foamy sand where she was buried as punishment by the all-female Polish space military. (Its apparent bias against the Polish is just one of the many inexplicable things about this movie.)

But let’s back up for a moment. In the opening moments of “After Blue,” a voice purrs, “You are no longer on your planet. You are in space,” as a groovy jewel-toned orb spins, suspended in a dusty void. As if such a disclaimer was really necessary: After Blue, the post-Earth colony occupied by human “ovarian bearers” (those without ovaries die shortly after birth, choking on their own hair—again, don’t ask) where our story takes place does indeed look like it was created by a big Kate Bush fan.

Bovine creatures with geodes for faces roam the countryside, which is dotted with crystals and dusted with glitter that sticks in the thickets of hair that cover everyone’s neck and shoulders. (Hair plays a big role in this movie.) The residents of After Blue dress in witchy black outfits that blend “American Horror Story: Coven” and “Female Prisoner Scorpion.” All technology was banned from After Blue after its settlement by humankind, which makes the film’s lone male-esque figure, a designer pleasure-bot named Olgar-2 (Michaël Erpelding), a dangerous piece of contraband. Sensual goop drips from the branches of alien trees, and neon and blacklight paint are used to inventive, aesthetically appealing ends.

The vibe is equal parts metaphysical store and the influential French sci-fi artist Moebius, and it’s quite enchanting—especially if floppy hats and chunky geode jewelry happen to be your thing. But the effort that was put into building the world of “After Blue” is sadly not matched in terms of character development or narrative arc. To be fair, it is very French to have a movie where the characters spend a good portion of the film at dinner parties smoking and discussing the necessity of freeing art from the constraints of conventional morality before making out in a hot tub. (The hot tub is made out of the bisected torso of a megalithic alien creature whose warm viscera are apparently good for the skin, to give you a further idea of what we’re dealing with here.)

But “After Blue” advertises itself as a sci-fi/fantasy epic, and although it’s a long and complicated story with many elaborate settings, it ends up feeling small and inconsequential by the end. This is through no fault of the film’s art department, whose passion for their work shows up in sets and costumes whose ingenuity transcends their relatively low-budget origins. The culprit here is Mandico’s script, which suffers from pacing issues that draw out the filler portions of the story and under-emphasize the dramatically essential ones.

“After Blue” might be better off as an art installation than as a narrative film, given that it’s more fun to describe than it is to actually watch. But it is ever so fun to describe. Did we mention that Roxy smokes cigarettes that wiggle like caterpillars when you light them, and that Olgar-2’s penis has tentacles like a squid? 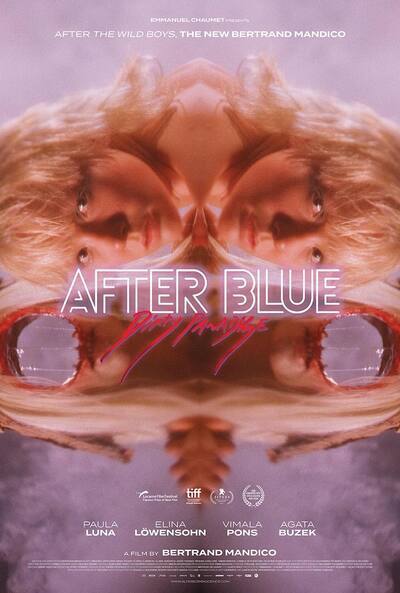