“Addicted to Fresno” is such a mean-spirited, dull and silly movie that it buries its talented cast under the weight of a horrendous script that they can’t possibly redeem. Much like the recent “Staten Island Summer,” it’s a “comedy” with a great ensemble given almost nothing funny to do. Similar to that film, it makes one wonder why so many actors and actresses who should know they’re above this material chose not to be for a few weeks of filming. My guess is that the involvement of Jamie Babbitt propelled them to sign on the bottom line, as they likely worked with the excellent TV director on “Married,” “Girls,” “Playing House,” “Drop Dead Diva,” “United States of Tara,” “The Middle” or a dozen other hit shows. Babbitt is generally a confident, capable TV director, but she can’t rescue Karey Dornetto’s script from its misanthropic foundation. This is a film mostly populated by awful people doing awful things that awful people only do in awful movies.

Shannon (Judy Greer) has moved in with her sister Martha (Natasha Lyonne) after running away from rehab for sex addiction. She’s also been forced to get a job at the same hotel at which Martha works, run by Kristen (Jessica St. Clair), and where she meets Martha’s friendly co-worker Eric (Malcolm Barrett). Meanwhile, Shannon is sleeping with her married therapist Edwin (Ron Livingston) while Martha struggles with a recent break-up and ignores the advances of Kelly (Aubrey Plaza), who’s clearly romantically interested.

What starts as a character dramedy a la “Sunshine Cleaning” becomes something much different when Shannon decides to have quickie sex with a hotel guest (Jon Daly), and Martha bursts in on them. Shannon cries rape, Martha moves to defend her sister, and the guy ends up dead. Now, the sisters have to dispose of a body, which actually takes this sitcom-ish story to a crematorium and a Bar Mitzvah that the girls choose to rob. Molly Shannon, Fred Armisen, Kumail Nanjiani and Alison Tolman co-star in small roles. All should have known better.

There are so many unlikable characters and blatantly Look At How Edgy We Are joke topics here that it’s hard to keep track—rape, addiction, murder, dementia, Down’s Syndrome, etc. Do you find these things inherently hilarious? “Addicted to Fresno” is for you. Using this kind of material for humor is certainly not impossible, but it does demand a difficult tonal balance that Dornetto can’t manage. It’s more often gross and off-putting than funny. It’s like a stand-up comedian trying out their new, edgy material to the sound of clinking glasses and hearty sighs. Do you think an old woman in a birthday hat in a wheelchair saying “poopy” is funny? Do you know anyone who does? If so, you may want to find new friends.

The cast is so talented that “Addicted to Fresno” gets more depressing as you realize how much they’re going to be wasted. There are a few moments in which that talent shines through—the first scene between Greer & Shannon, a funny bit with Nanjiani, Armisen & Tolman’s first scene—but they’re almost instantly buried by material that falls flat. By the time the girls are planning to boost gifts from a Bar Mitzvah, my brain had completely checked out and gone somewhere more interesting, safer, and funnier. 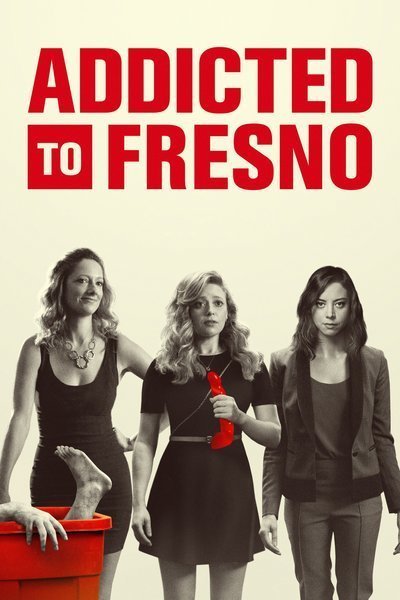