Following the success of “Wayne’s World,” the ‘90s saw a wave of “Saturday Night Live” sketches turned into feature films that are best forgotten, including “It’s Pat,” “The Ladies Man,” “Superstar” and “A Night at the Roxbury.” The films were exercises in laziness, features built on the concept that the only thing one needed to in order to stretch a 5-minute sketch into a 90-minute movie was to repeat the same jokes—and often catch phrases—about 18 times. The comedies were particularly frustrating because one could sense the pure comic talent of people like Will Ferrell and Molly Shannon, and so were disappointed when they were wasted on such junk. The trend died out, and we can all be grateful we didn’t have to suffer through “The Target Lady” or “The Californians” (although I’d donate to a Stefon movie Kickstarter). All of this makes “Staten Island Summer,” now open in select theaters and available Digital platforms before appearing on Netflix this Thursday, July 30th, feel like even more of an anachronism. They don’t make movies that seem to purposefully waste the talents of current “SNL” stars much any more. Well, except for this one.

To be fair, the “SNL” cast here is supporting and not lead, but they are the draw, especially after one spends five minutes with the actual leads of “Staten Island Summer,” and realizes they are merely mediocre riffs on the characters that Michael Cera and Jonah Hill played so memorably in “Superbad.” The likable but dull Graham Phillips plays the likable but dull Danny Campbell as he narrates the story of the most important summer of his life, which takes place almost entirely at the public pool at which he is a lifeguard. Danny and his best buddy Frank (the remarkably annoying Zack Pearlman) need to have one last Summer blast before they head into adulthood, and so this year’s annual after hour pool party is of the utmost importance. Will Frank hook up with one of the gorgeous twins (Katie and Kellie Cockrell) who have ignored him all Summer? Will Danny finally get close to the legendary Krystal Manicucci (Ashley Greene), his first crush?

Around the fringe of this riff on “American Pie” and “Superbad” lay the “SNL” cast members, past and present, all seemingly doing “Weekend Update” host Colin Jost a favor (Jost wrote the clearly semi-biographical piece and has a small part as a rambunctious cop). Cecily Strong, Will Forte, Fred Armisen, Bobby Moynihan and the Emmy-nominated Kate McKinnon are all, to varying degrees, wasted. Strong has the biggest role as the toughest talker on the lifeguard staff, although her character is ultimately, of course, reduced to a love interest for another bro. Moynihan and Armisen fare reasonably well as the stoner lifeguard and slightly-unhinged groundskeeper, respectively. McKinnon is totally wasted, and other familiar faces like Kate Walsh, Jim Gaffigan, Gina Gershon, Vincent Pastore and even Method Man pop up to make one wonder what attracted so many people to so little. None of them are particularly “bad” here but they’ve been given almost nothing to do. They don’t play realistic characters, they don’t tell jokes; they’re just kind of there. The result is a weird exercise in which you play a game of recognizing performers instead of actually giving a damn about what they’re doing in the actual movie.

Perhaps it was little more than the promise to hang out together around a pool for a few weeks. It certainly seems that way given the lack of actual writing and joke-crafting going on here. Jost can’t figure out the movie he wanted to make. “Staten Island Summer” starts as a nostalgia piece, even promising a bit of dramedy a la “The Way Way Back.” And yet there’s absolutely no depth to the piece whatsoever, largely in part because we’re never given one reason to care about Danny. Sure, he seems nice, but literally everyone around him is simply more interesting. “Staten Island Summer” is one of those films in which virtually every time a supporting character leaves, you wish you could go with him or her. Except for Frank, a walking and talking cliché of the horny teenager.

We were all teenagers once. Most of us have that “formative summer” upon which we can look back and fondly remember the people with whom we spent it. So Colin Jost wanted to bring his friends along to recreate his personal summer memories. Someone should have told him, perhaps someone who worked on those ‘90s “SNL” movies, that you can never go back again. 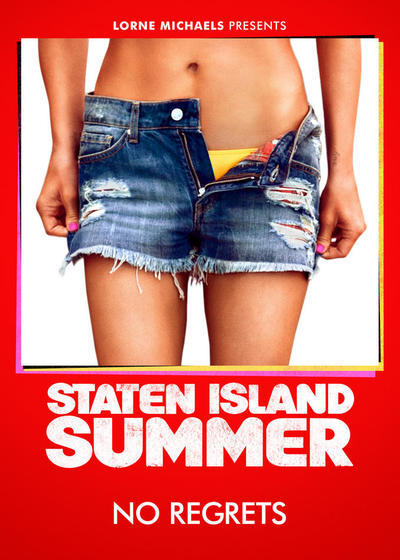 Rated R for sexuality/nudity, crude humor and language throughout, drug content and partying - all involving teens.