She is the only woman in a gay nightclub. She goes into the toilet and cuts her wrist. He follows her in, sees what she has done, and takes her to a drugstore, where the wound is bandaged. If you cut your wrist and there's time to go to the drugstore, maybe you weren't really trying. He asks her why she did it. "Because I'm a woman," she says, although she might more accurately have replied, "Because I'm a woman in a Catherine Breillat movie."

The Woman believes men hate women, and that gay men hate them even more than straight men, who, however, hate them quite enough. Men fear woman, fear their menstrual secrets, fear their gynecological mysteries, fear that during sex they might disappear entirely within the woman and be imprisoned again by the womb. To demonstrate her beliefs, The Woman disrobes completely and displays herself on a bed, while The Man sits in a chair and watches her, occasionally rousing himself for a shot of Jack on the rocks.

They talk. They speak as only the French can speak, as if it is not enough for a concept to be difficult, it must be impenetrable. No two real people in the history of mankind have ever spoken like this, save perhaps for some of Breillat's friends that even she gets bored by.

"Your words are inept reproaches," they say, and "I bless the day I was made immune to you and all your kind." After a few days of epigrams, they suddenly and sullenly have sex, and make a mess of the sheets.

Some events in this movie cannot be hinted at in a family newspaper. Objects emerge to the light of day that would distinguish target practice in a Bangkok sex show. There are moments when you wish that they would lighten up a little by bringing in the guy who bites off chicken heads.

Of course we are expected to respond on a visceral level to the movie's dirge about the crimes of men against women, which, it must be said, are hard to keep in mind given the crimes of The Woman against The Man, and the transgressions committed by The Director against Us.

No doubt the truth can be unpleasant, but I am not sure that unpleasantness is the same as the truth. There are scenes here where Breillat deliberately disgusts us, not because we are disgusted by the natural life functions of women, as she implies, but simply because The Woman does things that would make any reasonable Man, or Woman, for that matter, throw up. 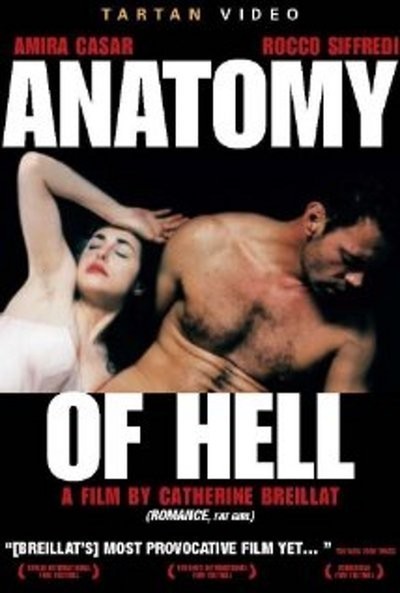 Amira Casar as The Woman

Rocco Siffredi as The Man