Anyone who has ever eaten a cupcake over the kitchen sink, like Paul Rudd's character in "This is 40," knows exactly what "Absolutely Fabulous: The Movie" feels like during its 90 minutes. It's more fulfilling to the soul than appetite, but the indulgence—if not the brief escape—is an inestimable perk.

The core of BBC's "Absolutely Fabulous" franchise is the bond between two middle-aged women, Edina and Patsy, whose ride-or-die devotion is now a welcome addition to a summer roster celebrating female friendships like in "Mike & Dave Need Wedding Dates" and "Ghostbusters." Aside from indulging us with brash fashion choices, constant cigarettes and partying, the series—and now this film—is a love story about friendship. Saunders and Lumley create a charisma that proves hard to resist with their satirical but full characters, including us on their shenanigans that feature crashing a runway show or accidentally knocking Kate Moss into the River Thames.

The adventure of "Absolutely Fabulous: The Movie" is better left unspoiled for what comes after Moss' hilarious disappearance, but it is filled with cameos (from Emma Bunton to the highly-applauded Joan Collins) in each set piece. It's a focused crowd-pleaser that loves the audience back, even if its comedy is more consistently amusing than laugh-out-loud funny. Director Mandie Fletcher's movie looks like a studio comedy—with some blasé editing goofs to boot—but the film has an inherent energy.

One of the better transitions from TV series to movie, it has an efficiency for fans and non-fans alike. Devotees of nicknamed "Ab Fab" will see a brighter, unleashed version of their beloved despicable characters, freed from the oppressive laugh tracks and stationary camerawork. But newcomers are equally welcome to appreciate a different kind of arrested development feature comedy, though based on the same values of an Apatow or Adam McKay joint, with even more ridiculousness and subsequent character darkness.

Either camp will face a testing satire of selfishness, and while brash with its un-PC mindset, the film is defined by a good heart. The feature length version of these characters helps to fortify emotional moments, especially between Edina and the woman that's her exact opposite in style and craziness, her daughter Saffy (Julia Sawalha). In an effective shifting of gears later in the film, Saunders (as writer and Edina) delivers a genuine heart-to-heart that deconstructs her character's desperate vanity, expressing the insecurities that we emotionally connect to first before laughing along with her.

Whether joking about the shallowness of the fashion industry or veering to an inverted riff on “Some Like It Hot,” you can never say this romp doesn’t go for it. The "it" may not be as consistently funny as the series, but a few huge laughs in a darkened theater seems to have higher value these days. 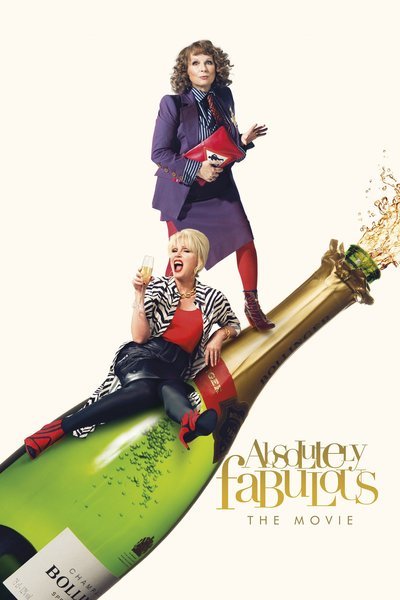 Rated R for language including sexual references, and some drug use.