In Terry Jones’ “Absolutely Anything,” a quartet of trigger-happy aliens leave it up to the morality of one human to see if Earth is worth not eradicating. If said individual does good with the temporary power to do, well, absolutely anything, we’re all saved. The CGI aliens here are voiced with self-amusement by Monty Python members Jones, John Cleese, Eric Idle and Terry Gilliam, but it’s telling that the last line of the whole movie—which is like treat-sized food-for-thought from a wonderfully silly director—is borrowed from Billy Wilder’s gravestone: “Nobody’s perfect.”

The random man chosen is Simon Pegg’s school teacher and struggling writer, Neil. Jones and co-writer Gavin Scott’s script quickly put the power into his hand, which he activates with a simple wave. He starts to understand his powers after he jokes in the teacher’s lounge that he’d like aliens to blow up his classroom of unruly students, only to have a laser beam annihilate the classroom and the young ones inside. Neil connects the dots through some contrived dialogue, learns about his abilities, wonders what to do with them, and that’s the movie “Absolutely Anything” settles into. Simple, a bit messy, but with enough big laughs from its nutty imagination.

While the concept sounds like “Bruce Almighty,” Jones’ idea takes it one curious step further by incorporating control over free will, the one limit in that Jim Carrey movie despite the title character’s God-given powers. The results here are funny especially with the wishes being fulfilled in a literal fashion; one of the best running jokes involving his friend Ray (Sanjeev Bhaskar) receiving his own wish, that a co-worker “worship” him, only for his workplace crush to start a religion around him. A main plot about control then comes into play with Neil wanting to win the heart of neighbor Catherine (Kate Beckinsale), but without literally forcing it, especially when he tells her what he can do. Beckinsale nonetheless becomes a mere prize to the story, aggressively sought after by a bullish American played by Rob Riggle, her own comic potential underused.

As Neil tries to woo Catherine, the hijinks run both half-baked and overcomplicated, but busy all the same. Eventually, Neil remembers that he can make his barking dog Dennis talk and think like a human, which makes Catherine think there’s a man in Neil’s apartment that desperately wants to shag his leg. It is worth noting, of course, that the dog is voiced by Robin Williams in his last film role. Footage in the credits of him voice-acting will remind you of his high-voltage stand-up, and will make you miss him even more.

Jones embraces the open canvas of his premise and colors it with striking sight gags, whether it’s a whiskey bottle bounding down the street towards a liquor store to be replaced with a new one, a classroom covered wall-to-wall with flowers or policemen in pink uniforms. It's an R-rated movie that has the bright colors of one that's made for kids, and that's perfect for Jones' humor. Just as well, there’s a darkness within the silly atmosphere and a fitfully messy morality. “Absolute power doesn’t corrupt,” Neil says in one of the script’s numerous pointed lines. “It just drives you bloody mad!”

Best of all is how the tension of the film concerns the wishes Neil doesn't make. He doesn’t think beyond his own problems until the third act, essentially proving the aliens right that apathy can be harmful enough, even if humans don’t directly choose to be evil. Yet as Jones builds a narrative based on his clumsy wishes and their select consequences, the craftiness is a brighter quality than direct moralizing.

Instead of the movie seeming like a puppet show with a message, Pegg gives the wacky scenario a first-person perspective and vital humanity. He’s a key part of the enjoyment, whether you are meant to laugh, think or feel something. Pegg brings his high energy and everyman quality that has worked in so many films (even when he was the best part about them), and becomes a strong surrogate for an experience beyond comprehension. It’s not a major role for his filmography but it does prove that he is without a doubt a major comedic actor, one who can create an arc out of someone gradually realizing God-like potential, but keep them grounded every step of the way.

“Absolutely Anything” comes with more baggage than just featuring the last performance by Williams—it was released in the UK two years ago, and is the last new project we’ll see from Jones as he was diagnosed with a rare dementia in 2015. None of those were factors I thought too much about, however, while watching the film. “Absolutely Anything” is more than its unique place in history, and serves to remind us that no one made movies for goofy adults quite like Jones did. 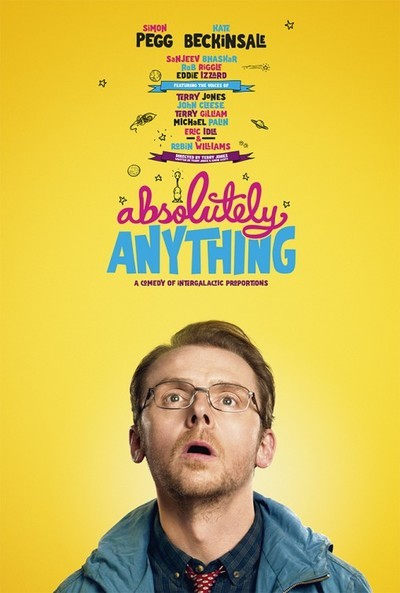 Rated R for language including sexual references, and brief nudity.