“You are mixing up ‘fusion’ with ‘confusion,’” aspiring tween chef Abe is told early on in director Fernando Grostein Andrade’s narrative debut, a well-meaning yet surprisingly bland coming-of-age dramedy. And who can blame the young, half-Israeli and half-Palestinian Brooklynite for being confused, when he often gets caught in the crossfire of the two sides of his family at dinnertime, and finds himself stuck with the impossible task of diffusing the culture clash? Luckily, food comes to the rescue of the unlikely culinary prodigy—sometimes called Abraham, other times, Ibrahim, depending on whom you ask—as he learns in due course how to harmoniously blend the traditional flavors of his ancestors’ distinct cuisines and unite people as a result.

All these ingredients could have been the makings of an appealing cinematic recipe; like a younger-skewing “Chocolat” or “Chef,” with teaching moments around identity and intersectional individuality at its center. If only the Brazilian filmmaker Andrade, who apparently loosely pulls from his own diverse background and multicultural upbringing for the story (alongside his Palestinian-American screenwriters Lameece Issaq and Jacob Kader), brought a bit more bite to the output beyond the most predictable beats. Instead, his “Abe”—unlike the dishes the film’s endearing cook prepares with wit and enthusiasm—is only as inventive as a mason jar drink or reclaimed wood table, culminating in an inoffensive children-centric film both adults and today’s sophisticated youngsters might have limited mileage with. The most parents can hope for in sitting their young ones in front of “Abe” is awakening their children’s inner foodie curiosities. While Andrade’s broad flick doesn’t push the envelope from a political standpoint, its charms might be just sufficient enough to inspire tweens and young adults to try their hands on a new kitchen project or two, especially these days amid all the quarantine boredom.

And the source of inspiration here is an affable role model, brought to life by “Stranger Things” actor Noah Schnapp with plenty of zest and believable innocence. When Schnapp’s brave Abe isn’t busy dissolving arguments between family members—including some uncompromising but loving grandparents set in their ways—he updates his video blog with his latest cooking endeavors, fends off mean online comments when his images are less than mouthwatering, and even plans out his own birthday cake while his agnostic parents Rebecca (Dagmara Dominczyk) and Amir (Arian Moayed) prove to be too distracted to care.

Hoping to take his craft to the next level in the looming summer months, Abe convinces his mom and dad to enroll him in a culinary camp for hopeful young cooks like himself. Though he quickly realizes those classes can teach him nothing he can’t already master in his sleep. Enter the charismatic Seu Jorge’s gifted street chef Chico—impressed with Abe’s precocious talent and passion, the busy master reluctantly agrees to take him in as an apprentice. The only problem is, Abe never shares his actual whereabouts with his parents, who continue to believe that their son is at the workshop for juvenile rookies. Naturally, the truth comes out soon enough, but not before Abe carves out enough time to crack the intricacies of fusion food.

While lensed fervently by the “Cinema Paradiso” cinematographer Blasco Giurato, the time spent between Chico and Abe leaves a lot to be desired beyond the showcasing of delectable dishes. The script tries to celebrate the diverse stripes of New York City life amid picturesque brownstones, but it sadly limits its characters through a series of clichéd potato-potahto traits, narrowing the story’s emotional scope down to the most obvious. “Abe” could have been one unforgettable meal, but instead, its aftertaste is barely memorable. 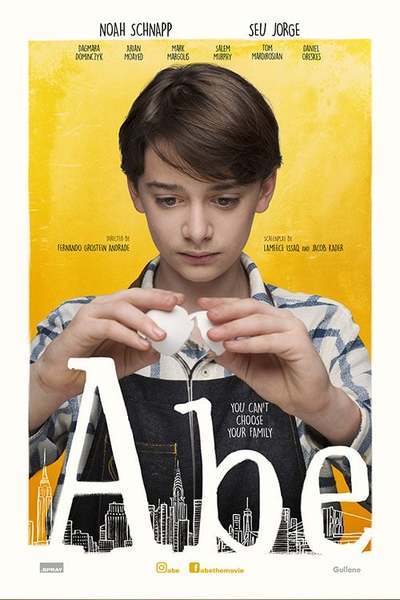