A Call to Spy

So much of good storytelling is finding the stories not yet told, peeking through the cracks for the voices and experiences that haven't "made it" into the mainstream narrative of oft-told historical events. This is what "Hidden Figures"—the movie and the term itself—is all about. The story of America's space exploration has been told countless times, in books, documentaries, movies, approached from every possible angle. But the "Hidden Figures" story had, quite literally, never been told until Margot Lee Shetterly wrote her wonderful book. And now our understanding of that well-known event has expanded, and the "hidden figures" have been brought into the light where they belong. It takes a dedicated researcher to sniff out those stories, since there's no huge fingerprint of research to rely on. This is what Sarah Megan Thomas has done with "A Call to Spy," an excellent historical drama detailing the experiences of the "lady spies" recruited into England's Special Operations Executive (SOE) during WWII. Directed by Lydia Dean Pilcher, with script by Thomas (who also produced, as well as plays one of the lead roles), "A Call to Spy" is an engrossing and often thrilling spy drama, and a tribute to this courageous and diverse group of women.

The SOE was a secret organization, created in 1940 out of necessity, after the fall of France to the Nazis. Suddenly it was impossible to get reliable intel on what was going on across the Channel, and the SOE started recruiting women into the intelligence services. It was thought that women could move around more freely than men in occupied territories. The program's mission was what is referred to, beautifully, as "ungentlemanly warfare," i.e. sabotage, subversion, resistance. Vera Atkins, a Romanian Jewish immigrant in London, was in charge of the program to recruit capable women from both civilian life and the military. Wireless operators were in high demand, as were women who could speak fluent French. The program got off to a very bumpy start, since they were treading in uncharted waters. The work was hugely dangerous. All of these women risked death, and were given cyanide pills before departing, an option more preferable than falling into the Gestapo's hands. Many of them were killed or sent to concentration camps. One of the great things about Thomas' script is how it is about the "bumpy start," when the triumphs were few and far between, when all the mistakes were being made, learnings they would use in the future—but at such a huge human cost. The film looks reality in the eye.

The real life Virginia Hall was an American recruited into the SOE. Her attempts to get a job as a diplomat were dashed for years because of her prosthetic leg, the result of a teenage hunting accident. She even wrote a letter to F.D.R., pleading her case. Atkins recruited her into the program, against the wishes of nearly all of her colleagues, who could only see Virginia's disability. In "A Call to Spy," Thomas plays Virginia, a plucky young woman who speaks fluent French, who decides to take up Vera Atkins (Stana Katic) on the offer to join the SOE. Another important recruit is Noor Inayat Khan (played beautifully by Radhika Apte). A literal Princess, born of Indian and Russian parents, Noor is driven to help with the war effort, and as a gifted wireless operator her skills were in high demand. Wireless operators had a particularly difficult time, squatting in safe houses, knowing that at any moment their illegal signals would be picked up on by the authorities. Both women are dropped into France, with forged papers and elaborate cover stories, and almost zero organizational support from back home. They are on their own.

The women are roommates briefly, during the training phase, but after that, the narrative splits, and then splits again. We follow Virginia, in her attempts to meet up with resistance elements in Lyon, organizing sabotage missions against ammunitions shipments via water and land. The other track is Noor's, as she flees from place to place, typing information back to England as quick as she can. She is often on the run. She has no help or support. It's all up to her to figure it out. (This is one of the many deadly mistakes made in the early phases of the SOE's "ungentlemanly warfare" effort.) The final track is Vera's, back in England. As an immigrant, her loyalties are called into question by the xenophobic higher-ups. Her citizenship papers are held up, and her fears of being deported are legitimate. Romania was an active member of the Axis powers. Atkins would be killed if sent back there. This may seem like "too much" for one film, and maybe it would be for some people. For me, I was engrossed for every moment of the film's 123-minute running time. There are a couple of moments that jarred, mostly having to do with a "contemporary" moment blazing out of the period details. Some of the dialogue sounds contemporary, and there are a couple of "You go, girl!" lines that feel very Right Now and are wholly unnecessary. These historical women don't need that boost!

That being said, "A Call to Spy" is a case where the story really is the only thing that matters. The script has a lot going on, and it leaps back and forth across the Channel, but it's also taut. The film plays like a bat out of hell, pushed on by its own propulsion and interest. It does not get distracted by extraneous details. Backstories are filled in quickly. Thomas resists any desire to add something like a romance into the mix. Thomas wants people to know the amazing things these women did during the darkest years of the war. She spent years researching the story, interviewing relatives of the women involved, and crafting a screenplay out of their true stories. This project clearly would not exist without Thomas. (It's worth it to seek out "Equity," a really good corporate drama from 2016, also initiated by Thomas. She makes things happen.)

As Virginia attempts to make contact with the resistance, the film gives a good sense of France at that time, a seething hotbed of collaborators, spies, informants, secret resistance fighters, and treacherous double agents. There was a time when Virginia Hall was enemy #1 to the Gestapo in France for her subversive activities. Gestapo chief Klaus Barbie was on her trail relentlessly, reportedly saying, "I would give anything to get my hands on that limping Canadian bitch." Hall was American not Canadian, but that wouldn't have mattered to Barbie, who sent out a countrywide dragnet to track her down. Virginia Hall caused trouble, lots and lots of trouble. I didn't know anything about her until "A Call to Spy" and I am glad I know about her now. The same is true for Noor Inayat Khan, who, as played by Apte, is an inspiring figure: often terrified, hounded, chased, but determined to get the word out over the wire, even while crouching in a basement or an attic, as police pound on the door. These women were heroes. Hidden figures no more.

Now available in select theaters and on digital platforms 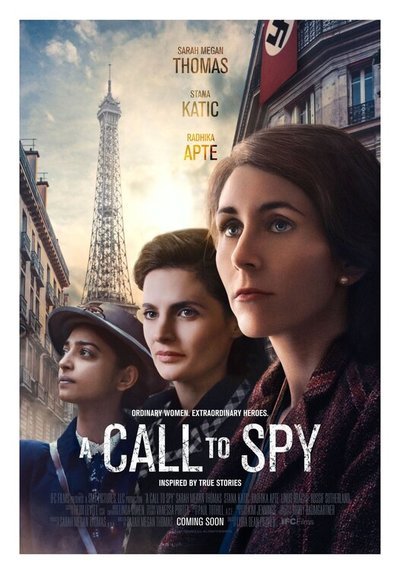