“Equity'"s main claim to fame is that it’s the first female-dominated depiction of the cutthroat dealings that define greed-is-good, ethics-are-overrated Wall Street. Given that most movies with plots revolving around the high-stakes financial world tend to slot women into peripheral roles—think Daryl Hannah as yuppie eye candy in “Wall Street” or Margot Robbie explaining the ins and outs of sub-prime mortgages while cavorting in a bubble bath in “The Big Short”—any upgrade in gender representation would be an improvement. I can think of just one stock-market-related showcase of recent vintage, where an actress was allowed to have the same impact as her numerous masculine counterparts, and that would be Demi Moore in the well-received yet underseen “Margin Call.”

But “Equity” goes a step further by allowing women to call the shots behind the camera as well. One glance at the credits reveals that this drama, about a veteran investment banker (played by Anna Gunn of “Breaking Bad”) who wages a fight to maintain her high-level professional status, boasts an admirable commitment to recruiting members of the consistently under-employed cinematic sisterhood. Meera Menon (Tribeca award winner for “Farah Goes Bang”) directed and Amy Fox (“Heights”) wrote the screenplay, based on a story by Sarah Megan Thomas. And two of the film’s stars—Alysia Reiner (fiendish assistant warden Fig on “Orange Is the New Black”) and Thomas—are producers as well as the co-founders of Broad Street Pictures, a company dedicated to telling stories from a female perspective, starting with “Equity.”

Being a woman who deeply cares about how we are portrayed in popular culture, I naturally have a rooting interest in “Equity.” And, initially, the film does many things right. Gunn’s Naomi, for one, is an eminently watchable if atypical heroine. She’s a sleekly attractive 40-something, with a figure that befits her age and the determined eyes of a tigress as she takes out her workplace frustrations on a punching bag at the gym.

Screenwriter Amy Fox wisely gives Naomi a Gordon Gekko-like defining speech early on when she speaks at a career-mentoring event for women. When a moderator asks, “What gets you up in the morning?” she candidly responds: “I like money—like knowing I have it.” She acknowledges her family’s cash flow problems while growing up and the fact that she helped her younger brothers pay for college. But she also adds, unapologetically, “It is OK to do it for ourselves—for how it makes us feel. Secure, yeah. Powerful, absolutely.” Her final suggestion: “Don’t let money be a dirty word.”

Yes, women can be just as ambitious, ruthless and desirous of wealth and control as their male cohorts. Maybe even more so. Still, the playing field isn’t quite level, considering that Naomi is passed over for a promotion after being blamed for an initial public offering going awry and is told by her boss that she "rubs people the wrong way" (a criticism that probably would never be lobbed at a man in her position). Instead of giving up, the specialist in Silicon Valley start-ups proceeds to double-down on efforts to seal the deal on handling the IPO for a hot tech commodity named Cachet.

The pair does share one thing: A less-than-fulfilling personal life. Lest she falls off her career ladder, Erin feels compelled to conceal that she is in the early stages of pregnancy from her co-workers—though sharp-eyed Naomi catches on—and hides her lack of enthusiasm about the prospect of motherhood from her boyfriend. Naomi, on the other hand, has an ongoing friends-with-benefits situation with hedge-fund manager Michael (James Purefoy), whose supposedly joking inquiry about the password for her work email hints at a possible hidden agenda.

But my favorite two characters are probably the vilest. Reiner deliciously revels in her take-no-prisoners role as a Justice Department investigator whose new beat involves white-collar crime such as insider trading. She reunites with her old college chum Naomi while not-so-secretly angling for info on Michael in order to snare one of his corrupt colleagues. Meanwhile, Naomi has her hands full catering to the whims of Ed (Samuel Roukin) the arrogant Zuckerberg-like wunderkind behind Cachet, complete with a hoodie-heavy wardrobe, whose roving eye briefly settles upon Erin.

But while “Equity” has all the signposts of a tense on-the-job thriller à la “Michael Clayton” and boasts the capable cast to pull it off, it too often meanders with little in the way of snap, crackle or pop to energize its interactions and confrontations, and is further dragged down by sluggish editing and the lack of surprising developments. Also regrettable is how little screen time is afforded to such fine actresses as Margaret Colin, Carrie Preston (so memorable on “The Good Wife” as easily-distracted attorney Elsbeth Tascioni) and up-and-comer Sophie von Haselberg (Bette Midler’s daughter).

Let’s give some points to how the men, even though they are distinctly secondary to the ladies in the cast, don’t come off as tossed-off clichés. And bravo for having the guts to deliver a fairly downbeat if realistic ending, along with a killer scene where Gunn throws a metaphorical fit over an inferior chocolate chip cookie. Good intentions do count even if the outcome is not perfect. Here is hoping that future productions from Broad Street Pictures prove more satisfying and offer bigger payoffs. 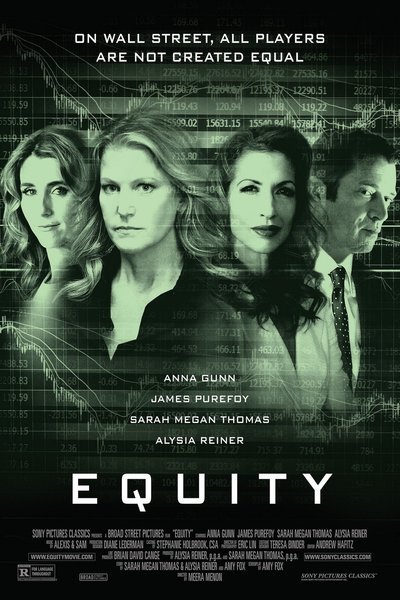