For 55 years, Michael Apted's "Up" series has produced documentary features about the lives of 14 regular people, joining James Bond as one of world cinema's few constants. The latest installment—and maybe the last, according to Apted—is a melancholy reminder that nothing lasts forever, certainly not a series that tracks specific lives over decades. Each entry has built steadily in power, the elapsed time and ever-more-extensive flashback footage from prior installments reminding us of everything that Apted's people have achieved or not achieved, the twists life has thrown at them, and the ways in which they have grown, stagnated, or regressed.

The organizing statement of the series is “Give me a child until he is 7, and I will give you the man." Here, as in earlier chapters, Apted thoughtfully shows how these people are the same little kids that we first met back in 1963, while exploring the ways in which they defied expectations: their own as well as society's. Britain itself is the series' fifteenth object of study, explored by Apted via questions about current or recent events (this time it's Brexit, and the responses are fascinating), and through conversations about class, living conditions, and money that have been constants throughout the series.

Several interviewees lament the decline of social services in the United Kingdom, the increasing impossibility of home ownership for the younger generation, and the unpleasant process of learning how to live with less, starting with the lorry driver turned actor and real estate developer Tony, who describes how he and his wife were forced to downsize after the economic crash of 2008 and subsequent setbacks. Several of Apted's subjects speak with anxiety as well as affection about now-adult children who are still living under their roofs or only moved out recently. Nations and ways of life fade and die, too, it seems, just like people, and none of us can really control that; we just have to adapt, or endure.

Now the story enters its final phase, described by Jim Broadbent's character in the fourth Indiana Jones film: "the age where life stops giving us things and starts taking them away." Most of Apted's subjects have lost one or both parents or are coping with their physical declines. A few of them are dealing with debilitating physical conditions of their own. One, Nick, was diagnosed with lung cancer ten days before Apted came over with his camera crew, and is understandably in a dire yet reflective frame of mind, stating that he's not too concerned about the certainty of his own death, but worries about its impact on his wife, children, friends, and extended family. Considering the visible impact of death on the lives of all the other interviewees, including one who talks about the psychic aftershocks of her mother's death 33 years ago, he's right to be worried. But death is part of life. So what can a person do but soldier on?

Another participant in the "Up" series, the school librarian Lynn, died a few years before this chapter was shot, after a minor accident on a playground triggered a chain reaction that exacerbated a physical condition (related to veins in her brain) that she'd been describing to Apted for decades. The shock of not seeing Lynn in the movie is revelatory because it confirms that the "Up" series has a lifespan, just like everyone involved with it. Lynn's story is continued, in a way, by her survivors, four of whom appear on camera to describe events that Apted's crew did not personally witness because they occurred within the seven-year gap between films.

If there is another installment—Apted seems skeptical that there can be one, but hasn't entirely ruled it out—will there be more deaths, and more scenes of family members filling in the last section of those stories? What if Apted dies before then? Will the series continue without him? Will there be a segment where his subjects talk about him? Perhaps footage from his memorial service? This might all sound ghoulish on paper. But the inescapable shadow of mortality is one of the topics the "Up" series is concerned with, along with the boundless promise of childhood and the hard lessons of maturity and middle age. It's bracing to see it discussed in such a straightforward way.

And yet I didn't come out of this one feeling depressed or even particularly sad, just reflective. The sheer breadth and depth of this series creates its own sort of poetry, one that's oddly entwined with journalism. This is most apparent whenever one of the subjects (or Apted) brings up a past statement or event, and the movie cuts to a sequence of shots or moments illustrating that the character has always been preoccupied with that thing, or done that thing, or denied being worried about that thing. One of the most effective techniques is a simple cut between shots of the same character walking or running as a child, a young adult, a middle-aged person, and an older person: you see that they still have the same posture, swing their legs and arms the same way, hold their heads the same way. To quote a Stephen Sondheim song, everything's different, nothing's changed, just ever-so-slightly rearranged. 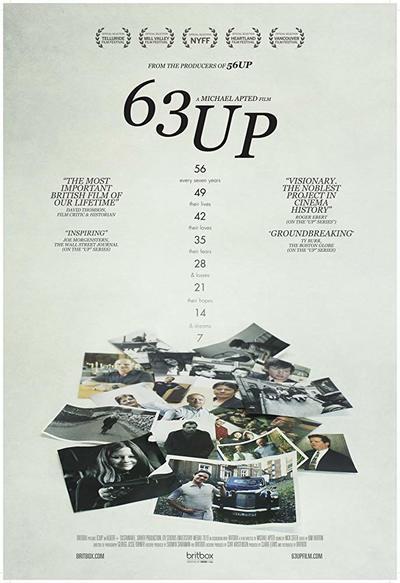