The original “47 Meters Down”—which told the story of a pair of sisters (Mandy Moore and Claire Holt) on a boat tour promising close-up encounters with sharks who found themselves trapped at the bottom of the ocean floor inside a damaged cage with too little air in their tanks, too many meters to the surface to make a safe ascent and too many CGI sharks in the area who were feeling a bit snacky—was slated to go direct-to-video until it was picked up for theatrical release two summers ago. The resulting film was not particularly good—it squandered its intriguing premise and the appealing performances from Moore and Holt on a series of increasingly banal shock moments before culminating with one of the stupidest endings to grace any film in recent memory. For whatever reason, it went on to become a sleeper hit. And thus, like clockwork, “47 Meters Down: Uncaged” is upon us and it is no small irony that this one was always destined for a theatrical release because between its B-minus-level cast, tatty visual effects and a storyline that goes far beyond the long line of shark-related films preceding it to find elements to pilfer, it is the one that feels more like a direct-to-video item that inexplicably wound up in theaters in search of a few bucks from bored late-summer audiences.

Since the list of surviving characters from the first film was fairly short and it would be unrealistic to expect them to base a follow-up around the misadventures of Matthew Modine’s hapless boat captain (though his tale might have inspired the late Oscar Wilde, were he alive and into junky shark movies, to muse “To lose one group of ninnies to sharks may be regarded as a misfortune; to lose two looks like carelessness”), “Uncaged” has no narrative connection to its predecessor. Set in Mexico, the film stars Sophie Nelisse as Mia, an American girl who has recently moved to Mexico with her undersea explorer father (John Corbett), his new wife (Nia Long) and stepsister Sasha (Corinne Foxx, daughter of Jamie), who fails to protect her from the school mean girls who bully her for no evident reason. The next day, Dad tries to get the two to share some quality time together by getting them tickets for a glass-bottomed boat excursion but when Sasha’s friends, Alexa (Brianne Tju) and Nicole (Sistine Stallone, niece of Frank), turn up with a better idea, she goes with them and brings Mia along for the ride.

The better idea turns out to be a remote lagoon adjacent to the entrance to a submerged Mayan city that Mia’s dad recently discovered. Luckily, his research team has left four sets of scuba gear around and the four decide to take a quick peek at the city’s first entry point. It is all fun and games for a bit but when one of them panics when a fish lunges at her, it inspires a chain reaction that sends much of the entrance crashing down and cutting them off from the surface. It's only then that the promised shark makes its long-overdue appearance—in this case, it is a great white who is blind from having spent so long in the underwater depths without sunlight but whose other senses are heightened as a result. Now, with dwindling air supplies and a blind and cranky shark at their heels, the four are forced to negotiate the twisty, increasingly cramped surroundings in a desperate effort to save themselves from drowning and being digested. A couple of additional characters pop up from time to time, but their fates are so overtly preordained that they may as well be wearing red scuba suits.

Not even the most devoted of Mandy Moore fans would mistake “47 Meters Down” for a good movie by any means, but it at least played reasonably fair with viewers (until the appalling ending, that is)—it allowed the characters to do all the right things to combat their plight and still found ways to turn the screws on them. Apparently returning co-writers Johannes Roberts and Ernest Riera used up all their borderline clever ideas to keep a story like this moving along and have instead elected to tell one that requires practically everyone to act like an absolute idiot at every moment to get from Point A to A-. Otherwise, the big innovation here seems to be that the two spend as much time ripping off “The Descent” as they do the usually litany of shark movies, though one of the latter pilferings is so blatant that it is almost breathtaking in its audacity.

As for the characters, they are so devoid of actual personality that once they don their scuba helmets and dive underwater, it is all but impossible to tell them apart at any given moment. Like most films that are set almost entirely underwater, this is not a particularly appealing film from a visual perspective—it is way too dark and murky for its own good—and when Roberts does put together one decent water-based attack sequence involving an incongruous musical accompaniment, it only serves as an echo of a similar sequence that proved to be the only memorable moment of his previous film, “The Strangers: Prey At Night.” Beyond that, the only thing that works here, ironically enough, is the ending, which is just as nonsensical as the originals, but is nevertheless goofy enough to bring some sorely needed energy to the proceedings.

In recent years, I seem to have become this site’s go-to guy for movies focused on sharks gnawing on people. On the grand scale of such things, “47 Meters Down: Uncaged” is probably somewhere smack in the middle—it is no “Jaws” (or even “Jaws 2”) but it is slightly better than whatever shark-related nonsense is currently airing on SyFy as I am writing these words. Actually, if you are seized with some weird desire to see this, waiting for it to turn up on SyFy in a few months might actually be the smart bet—you won’t lose anything visually and the commercials might help break up the monotony. 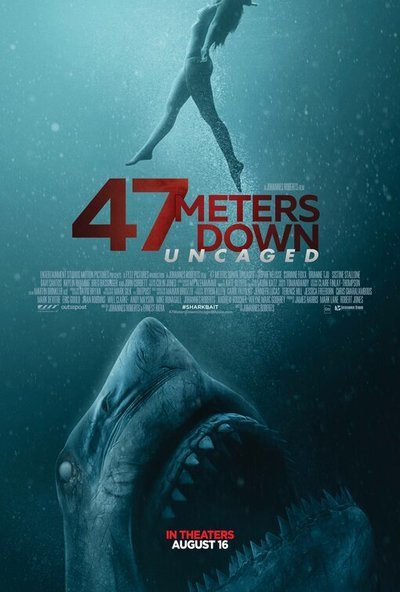