There's no doubt that many will consider the shark-infested thriller “47 Meters Down” to be nothing more than a ripoff, quickly rushed into production in the hopes of capitalizing on the success of last summer’s sleeper hit “The Shallows.” That is not precisely the case. In fact, the film was completed and set for a direct-to-video release last August until it was pulled literally a week before it was due to appear in stores (some copies even managed to slip through and get out into the marketplace) when another studio bought it to give it a proper theatrical release this summer, presumably in the hopes of scoring some of the same coin that “The Shallows” made. Alas, the backstory to the film is more interesting than the film itself, which takes an intriguing premise, a couple of reasonably nifty “BOO!” moments and a pair of likable leads and wastes them with tedious execution and an ending that is so silly that it almost defies belief.

Having just been dumped by her boyfriend on the eve of a big Mexican vacation because she is apparently too boring, Lisa (Mandy Moore) invites her firecracker younger sister Kate (Claire Holt) to come with her instead. While out partying, they meet a couple of local guys who convince the two to come with them on an excursion where they can climb into a shark cage and be lowered into the water in order to get a close-up look of the great white sharks swimming in the waters. After no small amount of hesitation, Lisa agrees to do it but grows increasingly apprehensive when they get to the dock and find that the boat is rickety, the cage is even more so and the captain is none other than Matthew Modine. Nevertheless, Kate coaxes her into going down and soon they are being lowered into the drink.

Everything is fine for a bit—the ocean life is beautiful and a couple of sharks show up on schedule, but their five-meter dive takes an immediate turn for the crappy when the winch breaks, plummeting the cage 47 meters down to the ocean floor. With only a small amount of air left in their tanks, the sisters struggle to figure a way out of their predicament. Alas, they are just out of radio range and cannot contact the surface without leaving the cage. When Kate does make contact, she learns that if they try swimming straight up to the surface, they will get the bends and most likely die. However, with their air running low, the sharks still hanging around and no real guarantee that the boat is even still there, let alone trying to affect a seemingly impossible rescue, the two try to figure a way out of their increasingly dire predicament and Lisa begins to discover an inner strength that she never knew she had, though that may not quite be enough to ward of the increasingly aggressive sharks.

Considering the number of primal fears that the premise of the film taps into, you would think that “47 Meters Down” would have no trouble making viewers squirm in their seats. But the film never quite manages to make them pay off. The screenplay by Johannes Roberts and Ernest Riera is a weirdly clunky work that never seems to know what it’s doing. The opening scenes involving Kate convincing Lisa to conquer her fears and stop being boring by getting in the cage are silly and when they agree to go under despite the shabby nature of the quasi-legal diving enterprise, it makes them seem like utter dimwits. Once they wind up at the ocean, little of what the two have to say to each other is of much interest and they keep doing silly things in order to intensify their plight—if someone is holding a tool of the upmost importance you can be sure that they will drop it at some point. Then there is the bizarre ending that inexplicably tries to throw a twist in the proceedings at precisely the point when it shouldn’t—to be fair, it is set up in such a way that you are more or less expecting it but it is executed so badly that there is an excellent chance that audiences will rebel against it as much as they have the ending of “It Comes at Night.” Put it this way—the ending of this film makes the ending of “The Shallows” (the one obvious weak point in that film) look like the ending of “Jaws” by comparison.

At the same time, there are certain elements to the film that aren’t that bad. Mandy Moore, who has always been an underrated actress in my book (her turn in the great “Southland Tales” is a thing of beauty), is immensely likable and sympathetic as Lisa, even if the script never quite finds a way to make her emotional turmoil pay off in a convincing dramatic fashion. Clare Holt is good as Kate, even if she has much less to do. And while Roberts is all thumbs when it comes to screenwriting, his work as director does manage to generate some genuine tension at certain points as he plunges us into the murky depths of the ocean with no idea of where we are or what might be lurking only a few feet away. As for the sharks themselves, they are used in a reasonably sparing manner—at least until the ending—and they manage to score a couple of decent-sized scares by popping out of nowhere to wreak havoc. The best thing about the film, oddly enough, is the enormously effective score by tomandandy that does a good job of adding another layer of tension to the proceedings.

For most of the time while watching “47 Meters Down,” I was considering giving it 2 1/2 stars—it was no “Jaws” nor was it even “The Shallows” (which I implore you to see if you haven’t yet done so) but it contained a few effective moments and its small-scale and claustrophobic feel was a bit of a relief after watching one bloated would-be blockbuster after another. Then that ending popped up and it annoyed me so much that I find myself docking the entire thing a half-star for that alone. I guess what I am trying to say is that “47 Meters Down,” despite a few things going for it, is an easily skippable work that will, ironically, probably wind up playing better on television and home video, where viewers might be more willing to overlook its failings. I am also trying to say that whoever came up with this film's ending should be chopped up into chum themselves. 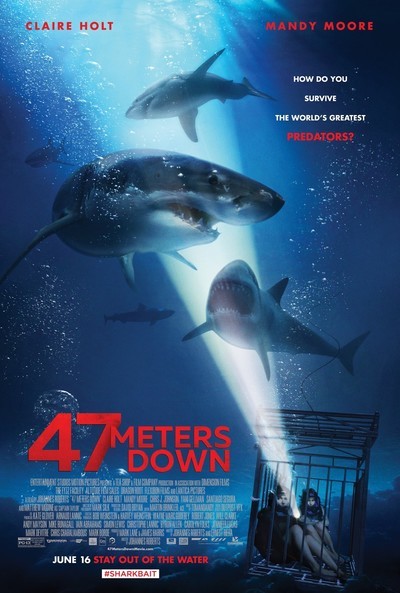