Robert Altman's "3 Women" is, on the one hand, a straightforward portrait of life in a godforsaken California desert community, and, on the other, a mysterious exploration of human personalities. Its specifics are so real you can almost touch them, and its conclusion so surreal we can supply our own.

The community exists somewhere in Southern California, that uncharted continent of discontent and restlessness. Some of its people have put themselves down in a place that contains, so far as we can see, a spa where old people take an arthritis cure, a Western-style bar with a shooting range outback, and a singles residential motel with a swimming pool that has the most unsettling murals on its bottom.

Into this outpost one day comes Pinky (Sissy Spacek), a child-woman so naïve, so open, so willing to have enthusiasm, that in another century she might have been a saint, a strange one. She takes a job at the spa and is instructed in her duties by Millie (Shelley Duvall), who is fascinated by the incorrect belief that the men in town are hot for her. Millie recruits Pinky as a roommate in the motel.

This whole stretch of the film -- the first hour -- is a funny, satirical, and sometimes sad study of the community and its people, who have almost all failed at something else, somewhere else. The dominant male is Edgar (Robert Fortier), a onetime stuntman, now a boozer with a beer bottle permanently in his hand. He's married to Willie (Janice Rule), who never speaks, and is pregnant, and is painting the murals. It's all terrifically new to Pinky: Drinking a beer (which she does as if just discovering the principle of a glass), or moving into Millie's apartment (which she solemnly declares to be the most beautiful place she's ever seen).

Then the film arrives at its center point, one of masked sexual horror. Millie comes home with Edgar and throws Pinky out of their bedroom, and Pinky tries to commit suicide by jumping into the pool. She survives, but as she recovers the film moves from realism to a strange, haunted psychological landscape in which, somehow, Pinky and Millie exchange personalities. "3 Women" isn't Altman out of Freud via Psychology Today, and so the movie mercifully doesn't attempt to explain what's happened in logical terms (any explanation would be disappointing, I think, compared to the continuing mystery). Somehow we feel what's happened, though, even if we can't explain it in so many words.

The movie's been compared to Bergman's "Persona," another film in which women seem to share personalities, and maybe "Persona," also so mysterious when we first see it, helps point the way. But I believe Altman has provided his own signposts, in two important scenes, one at the beginning, one at the end, that mirror one another. Millie, teaching Pinky how to exercise the old folks' legs in the hot baths, places Pinky's feet on her stomach and moves them back and forth, just as Pinky sees the apparition of two twins on the other side of the pool.

Later, when the older woman, Willie, is in labor, Millie places her legs in the same way and moves them in the same way, trying to assist the delivery. But the baby is stillborn, and so are the male-female connections in this small society. And so the women symbolically give birth to each other, around and around in a circle, just as (Altman himself suggests) the end of the picture could be seen as the moment just before its beginning.

The movie's story came to Altman during a dream, he's said, and he provides it with a dreamlike tone. The plot connections, which sometimes make little literal sense, do seem to connect emotionally, viscerally, as all things do in dreams. To act in a story like this must be a great deal more difficult than performing straightforward narrative, but Spacek and Duvall go through their changes so well that it's eerie, and unforgettable. So is the film. 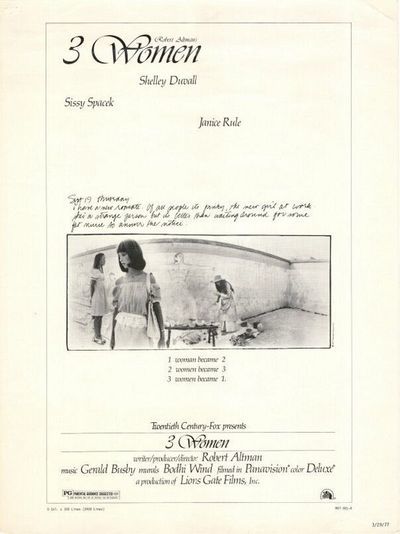