One of the most joyous elements of the success of “John Wick” was the way in which that film used Keanu Reeves’ particular on-screen presence to greatest impact. Action films often play to the strengths of their leading men from the everyman persona Bruce Willis carried into “Die Hard” to the world-weariness of Liam Neeson in “Taken,” and so it was with Mr. Wick, a role that felt tailormade for Reeves. However, the opposite reaction is produced while watching “24 Hours to Live,” a film that seems at odds with the grounded personality of its leading man, the wonderful Ethan Hawke. Throughout the film, you can see Hawke trying to bring resonance and truth to a movie that is plotted like a “Crank” sequel and has dialogue that sounds like it was written by a teenage boy. Watching the actor fight against the deep flaws of the film he’s in is almost more interesting than the plot itself. At least it’s more entertaining.

Hawke plays Travis Conrad, a man introduced fishing with his father-in-law (Rutger Hauer), talking about his soul. Moments later, they’re pouring out the ashes of Travis’ wife and son, who died a year ago that day. The manipulative device of Conrad’s grief over losing his family will return again and again, and never be anything more than a cheap screenwriting trick. And it’s not even a well-done one. Torn from any sort of family loyalty, Conrad should be a loose cannon, but Hawke and director Brian Smrz never quite get there, making him more grief-stricken than out-for-vengeance, even when he finds out he’s got, wait for it, “24 Hours to Live.”

You see, this is no ordinary assassin film. After Conrad is called in for one last assignment, for which he’ll be paid $2 million, he ends up getting plugged a couple times in the street. He wakes up on an operating table with a gasp, told that the government has invented a new technology that can basically resurrect anyone with a catch: they’ve got 24 hours. And to add a bit of cinematic flair to that countdown, they literally put a ticking clock in the patient’s arm. So, the nefarious Powers That Be wake Conrad to get a piece of vital information from him that he learned just before getting shot. Of course, they don’t consider that one of their best assets may not just want to wait out the next 23:55 in the operating room, and Conrad breaks out, turns the tables, and comes after the people who brought him back to life.

A little bit of “Crank” and a little bit of “John Wick” with Ethan Hawke? Sounds like a great idea. How could a movie with an assassin with a death timer in his arm be so dull? The main problem is the aforementioned disconnect between actor and project. Hawke brings gravity to his roles, and this movie needed insanity. He’s such a relatable, humane actor, but this kind of part requires something hollower—a cog in the B-movie machine. Whenever Hawke tries to sell it believably, we can see the plot holes and manipulative tricks. Believe it or not, most of this doesn’t make sense (particularly the fact that they wake Conrad to get information on a location that likely would have been moved after a street shoot-out, but whatever). I wish I could say that “24 Hours to Live” works best if you just shut off your brain and stop asking questions, but the point is that it’s never fun enough for that to work. Suspension of disbelief in B-movie action requires a degree of joyous, rollercoaster, unhinged filmmaking. “24 Hours to Live” is too boring to not ask questions.

Here’s where we could pick apart further failed elements of “24 Hours to Live” including the uniformly horrible supporting cast and lackluster direction, but why bother? Ethan Hawke, who makes roughly six films a year, will shake this off and move on, probably finding his "John Wick" somewhere down the road. You should wait until he does. 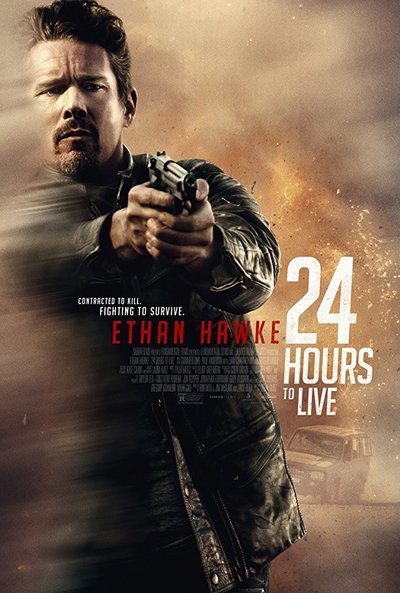 Rated R for strong bloody violence throughout, language and some drug use.