Why are you reading this review?

It's a legitimate question, not just because "22 Jump Street" is a sequel to a hit, and therefore an example of what's known as a "critic-proof movie," but also because it reviews itself as it goes along. It's a buddy cop movie about buddy cop movies that seems determined to go Edgar Wright's modern classic "Hot Fuzz" one better (nobody can do that, but nice try). It's also a sequel about sequels, and the often cynical appeal of sequels. And it's very, very, very, very aware of itself as a movie—or "movie." It anticipates any observation or objection you might make and makes it first, with a grin and a shrug. It pushes the meta-humor thing so far that after a while, watching it starts to feel like an amiable surrender to low expectations—not unlike the Bob Hope and Bing Crosby "Road" pictures, some of which felt so obligatory that after a certain point the studio might as well have replaced the films with printed cards telling fans where to send their money.

In "21 Jump Street," officers Jenko (Channing Tatum) and Schmidt (Jonah Hill) went undercover at a high school. In this film, it's college. Atmospheric details aside, though, the investigations are so similar that Jenko, Schmidt and other characters remark on their similarity, as well as the fact that this is a sequel to film a based on a TV show, and that nothing of consequence will happen in it. There are jokes about how sequels are "always worse the second time around" but they've been given "carte blanche with the budget, mother------r," and how the new precinct house, an open-aired monstrosity, looks "twice as expensive" as the one in the last movie "for no reason" and resembles "a cube of ice" (a phrase uttered when costar Ice Cube appears as the duo's commanding officer, Capt. Dickson). Jenko sighs that he's "the first person in my family to pretend to go to college," then gets in good with a fraternity that might be dealing a deadly amphetamine-like drug known as Wi-Fi. Schmidt poses as Jenko's blood brother, a schlump.

And it's here that the script, credited to Michael Bacall, veers away from pure spoof and becomes what Gender Studies majors might call a deconstruction of masculine codes, kidding the same macho clichés it indulges. This is not a new approach. The James Bond films, Sergio Leone westerns, the "Lethal Weapon" series, the under-seen and underrated "Gunmen," the "Bad Boys" movies, Jackie Chan's whole career, and the aforementioned "Hot Fuzz"—which you should watch immediately if you haven't already—all did it, too, to varying degrees. Still, "22 Jump Street" is a superior example. It takes the homoerotic energy bubbling under the surface of buddy action flicks and raises it into the sunlight, where it can flex its pecs and growl.

The physical differences between the tall, beefy, athletic Jenko and the short, doughy Schmidt were a source of humor in the first film. Here they're underlined by having Jenko become a football star to buddy up with one key suspect, a quarterback and fraternity bigwig played by Wyatt Russell. Their relationship is based on appreciating each other's alpha male awesomeness. (Jenko has the edge; he can open beer bottles with his eyelids.) Their obsessive workouts stand in for the sex they won't have because they're straight. Meanwhile, Schmidt plays femme to Jenko's butch, falling for a poetry major named Maya (Amber Stevens) and melting around her as a stereotypical female groupie might melt around a young male literary lion. (Schmidt even gets a "walk of shame" after the first night they spend together, clutching his sneakers like heels.) After a while Schmidt starts to suspect that Jenko is in too deep at the frat—not a euphemism, amazingly—and they have a devastating talk that ends with Jenko saying that maybe it's time that they investigated other people.

Is this movie anti-homophobic, or is it dealing in what critic Sam Adams calls "meta-homophobia"? Despite a few crude lapses, it's more the former, I think; if anything, this film's relentless joking about Schmidt and Jenko as sweethearts who refuse to consummate feels like a cultural advance. A movie like this could not have been made twenty years ago, or even ten, unless it were preaching to the choir of art house audiences. It might have had other characters kidding about how Schmidt and Jenko should just get a room already, but it wouldn't have elaborated on it at feature length, with such intensity. The partners in "22 Jump Street" don't kiss, but the way Hill and Tatum deliver state-of-the-relationship lines while fighting back tears, they don't have to. There's a closeup of the pouty-lipped Jenko dolled up for a fraternity rush party, too-tight puka necklace choking his Frankenstein's-monster neck, that distills a century's worth of fratboy sublimation to one image.

Hill and Tatum are a brilliant team. They play dumb the way Jelly Roll Morton played piano. Tatum, in particular, has a gift for portraying lunkheaded goodness. No matter who you are, Jenko is happy to see you, and if you're nice to him, he'll love you till the end of time. He's the biggest, brawniest puppy in film history: Marmaduke as played by a human.

This seems as good a place as any to note that "22 Jump Street" is the latest film by directors Phil Lord and Christopher Miller, the auteurs behind a range of self-aware blockbusters, including the "Cloudy with a Chance of Meatballs" films, "The Lego Movie" and "21 Jump Street." Lord and Miller are masters of eating their cake and having it, too. In all of their work—but "The Lego Movie" especially—you get the sense that they've thought long and hard (ahem) about the essence of the thing they're spoofing, and what, exactly, the viewer's thirst for that sort of entertainment says about them personally, as well as the culture that enfolds us. The "Lego Movie" song "Everything is Awesome" might be the definitive statement on consumerism as a way of life. The hero is a wage slave, living in an endless boring loop that he's convinced himself is peachy. Hype encourages him to feel that way because if he accepts his manufactured life, nobody involved in creating institutional structures or manufacturing goods or entertainment will have to try harder, much less change anything. Nobody questions. The money just flows.

That's a bracingly cynical point-of-view when you consider that Lord and Miller's films are part of the status quo that they're implicitly railing against. With its paint-by-numbers plotting and open acknowledgment that nothing onscreen makes sense (everyone thinks the cops are too old to pass for college dudes, and Schmidt's girlfriend's roommate, a witheringly sarcastic young woman played by Jillian Bell, demands that Schmidt "tell us about the war, any of them"), "22 Jump Street" is the sort of film that the Lego guy might watch alone in his nondescript little Lego apartment while eating Lego snacks from a Lego bowl and smiling desperately.

But instead of being bored with itself, the film is lively, sometimes ecstatically silly. It has some of the greatest split-screen gags I've seen, the best of which, an extended drug trip, is "Duck Amuck" sublime. Even when it's not highlighting its movie-ness, your mind races to predict what clichés it'll skewer/indulge next. The final credits sequence listing all the sequels that the "Jump Street" team will make in the future feels like Lord and Miller's way of warning wisecracking viewers, "Don't try to out-funny us, because there's no joke you can make that we haven't thought of—and none of them were that clever to start with." The movie is post-entertainment entertainment. The joke's on everyone. 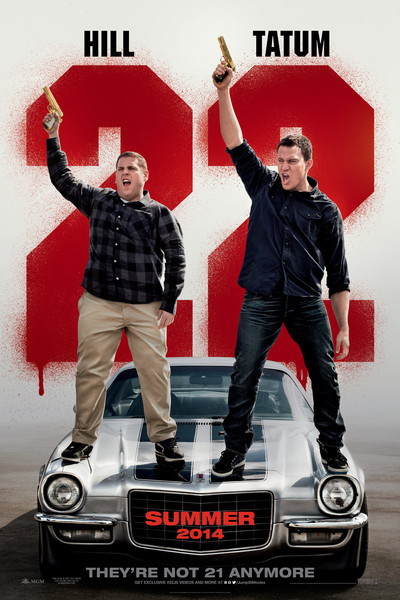