13 Hours: The Secret Soldiers of Benghazi

With “13 Hours: The Secret Soldiers of Benghazi,” Michael Bay has done for the attack on Benghazi and those who fought and died there what he did for the attack on Pearl Harbor in “Pearl Harbor”—reduce the seriousness of the event and the sacrifices made into another exercise of the kind of slick, soulless excess that is virtually indistinguishable, both stylistically and dramatically, from the rest of his filmography.

Based on the best-selling account by Mitchell Zuckoff (with the participation of five of the survivors of the attack), the film begins as former Navy SEAL Jack Silva (John Krasinski) arrives in Benghazi to work as a private consultant on the security detail for a CIA outpost alongside old friend Tyrone “Rone” Woods (James Badge Dale). The job isn’t ideal—Benghazi is one of the most dangerous places in the world; he is separated from his wife and young daughters; and all the official CIA people that he is working under, especially outpost chief Bob (David Costabile), are constantly reminding all the security guys that they are the ones doing the important work. It brings in more money than staying at home and working as a real estate agent.

In early September 2012, U.S. Ambassador Chris Stevens (Matt Letscher) arrives and insists on staying at the diplomatic compound during his visit. While inspecting the premises before the arrival of Ambassador Stevens, Silva, Rone and their fellow security consultants realize instantly that the protection it offers is completely inadequate. They're further appalled when they see that a once-secret meeting has been made into a public affair, alerting everyone in the dangerously unstable region to the presence of Stevens. Nevertheless, the CIA guys and the security patrol at the diplomatic compound poo-poo their warnings and insist that they have everything under control.

On September 11, the compound, with Stevens inside, is attacked by a heavily-armed mob that quickly storms the building and even sets it on fire in an attempt to smoke the ambassador out. From their vantage point at the CIA outpost a mile or so away, Silva, Rone and four other security men on hand—Kris “Tanto” Paronto (Pablo Schreiber), Dave “Boon” Benton (David Denman), John “Tig” Tiegan (Dominic Fumusa) and Mark “Oz” Geist (Max Martini)—can see what is going down and are prepared to rush over and assist, but the main CIA guy gives them a direct order to stand down. He continues to repeat that order until the six of them decide to defy it and head out to the compound without authorization. Although they fend off waves of attackers and manage to pull a couple of people out, they are unable to find Stevens in the burning building before returning to their base. It is then that the CIA base becomes the new focus of attack and the guys, along with a handful of others, are forced to single-handedly defend the compound and those inside while calls for air support are ignored and a potential rescue force is stuck on the tarmac in Tripoli mired in red tape.

In the hands of the right filmmaker, a film about Benghazi might have yielded something like Ridley Scott's “Black Hawk Down,” another chronicle of a mission in an unstable land that went horribly wrong. Scott’s film chronicled the horrors of what happened, the heroism of those that fought and the combination of mistakes, misjudgments and plain bad luck that occurred along the way. Alas, Michael Bay has never been known as a director with any sense of nuance, and instead recounts the story in the broadest manner imaginable. The screenplay by Chuck Hogan is about as simplistic and simple-minded as can be—our six heroes are near-gods who can do no wrong while the government operatives on display are cartoonishly dumb, obnoxious and blinkered in their thinking. When he wants viewers to recognize what drives our heroes to put themselves in harm’s way, he not only has one of them read aloud from Joseph Campbell’s “The Power of Myth” but repeats that moment as a flashback towards the end—which is also pretty much the extent of the character development as well. Frankly, the best writing in the film is featured in a clip from “Tropic Thunder” that is shown and considering what that movie is about—a group of actors going off to film a war story that proves to be not quite as accurate as advertised—its inclusion comes across as either the sickest joke imaginable or a weird bit of meta-commentary that somehow got slipped into the mix.

As for Bay, he treats the material in much the same manner for everything else—like a hyper-violent video game featuring lots of dazzle and precious little else. Thinking back to “Black Hawk Down,” you will recall how brilliantly Scott evoked the confusion of what happened while still laying everything out in a manner and allowing viewers to follow along and find order in the chaos. “13 Hours” evokes plenty of confusion, but it is less the fog of war and more the fog of a filmmaker who seems incapable of following the basic rules of film grammar when needed. One could argue that Bay is trying for a “you are there” approach that plunges viewers into the mayhem and keeps them as much in the dark as the character were but he just doesn’t have the skills to pull it off. Utilizing his familiar arsenal of rapid edits, slow-motion and showy special effects (including a bit following a mortar as it descends from the skies to hit its target that appears to be Bay’s homage to a similar shot in his own “Pearl Harbor”), he does everything he can to get an immediate reaction (including a bit in which the American flag is machine-gunned in slow-motion that feels like the longest sustained shot in the film) but neglects to give viewers anything else to grasp onto that could give them any understanding of what happened. As bad as the action is, the allegedly character-driven bits are even worse—a scene in which Silva gets some news from his wife and kids over a video chat while the family is at a McDonald’s drive-thru is so badly handled in every possible way that it makes the scene in Bay’s “Armageddon” with Ben Affleck, Liv Tyler and some animal crackers seem positively subtle by comparison.

Simply put, “13 Hours” is a pretty dreadful movie and while watching it, I sat there trying to figure out what kind of audience might actually go for it. Those of the liberal persuasion will write it off because it presents elements that have been highly disputed or flat-out denied (such as the stand-down orders) as unquestioned fact. Conservatives may be upset that it doesn’t go far enough in tying Hillary Clinton to the events depicted—unless I missed it, she is never once mentioned specifically. As an action movie and as a historical document, it is a bombastic and wholly inauthentic mess that displays precious little interest in the men whose actions and sacrifices it purports to honor. There is a good and interesting movie out there to be made about the tragic events at Benghazi and the political aftermath but “13 Hours” is definitely not it. 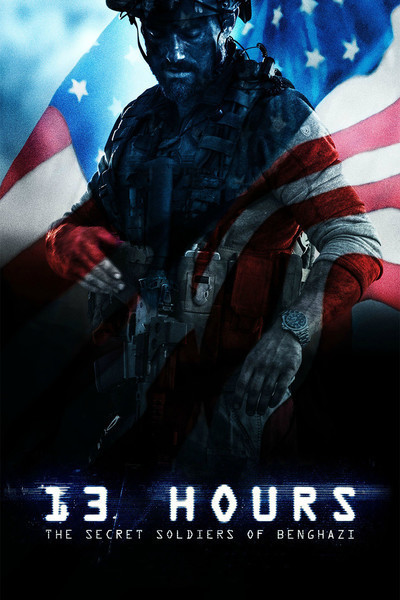 David Costabile as The Chief