"If you're not at the top, then you just...you just do better! 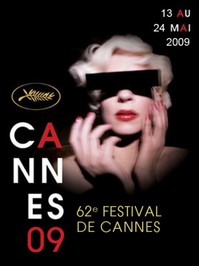 May 21--I am my Grandmother's dinner date on a friend's yacht. We walk down to the pier where all of the fancy yachts are docked. There are plastic signs hung from the front of the boats with the names of the company renting them for the night. Women are strutting up and down this pier like it's a runway! They're dressed up in expensive dresses and even more expensive heels, which aren't even allowed on the boats. Most of the boats are rented out for company parties, but others are privately owned by billionaires like Roberto Cavalli who can afford the hefty price tag of a docking space.

Since the boat we're going to isn't docked, we're meeting a smaller speed boat to take us out to it. It's pretty windy outside and we're having trouble finding the small boat at the pier. After 20 minutes of walking around and asking if anyone's name is Luke (the boat operator) we finally find him. Apparently we're at the wrong pier for a pick-up, but Luke is willing to pull my grandma along this 7' X 5' floating platform into his small speed boat.

My grandma is hilariously skeptical. She thinks about it for a few minutes, while the platform is sliding and bobbing around on top of the intense waves. "I have to walk across that?" she says. Luke tries to be persuasive, but even he's not buying that his manouever is completely safe. With a "I'm not falling into that water and drowning!" my grandma decides to meet Luke on the other end of the pier where there's a proper docking area. 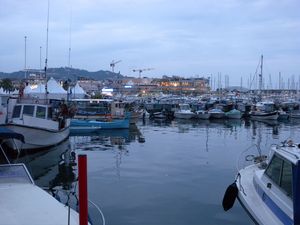 The Palais seen across the Old Harbor at Cannes (Carol Iwata; click for a nice enlargement)

Once we're in the boat Luke is warning us that the waves are really bad and that the ride will be "like a roller coaster." Again, one of these situations where I don't know if someone's telling the truth and being blunt, or trying to be funny. I need to work on that. Turns out, it wasn't a joke. We have to hold on to these handles and once the boat picks up speed we're flying in the air, riding up these waves and flipping back down into the water. I'm laughing the whole time, as usual. I look back at my grandma who gives me a tense smile and I notice that her knuckles have gone pale from her kung-fu grip on the holder. All of my hair primping and makeup was for nothing.

By the time we arrive at the yacht I look like Hell on a Monday. Once we get onto the boat, we shake hands, give hugs, and sit down for drinks, appetizers and some pre-dinner chatting. Dinner is delicious. The conversation ranges from Pete Seeger and the Weavers to an actor's passion, and ends, as most similar events do, with my grandma singing a song and getting up to dance. The music which has changed from ambient French electronic tones to Luther Vandross has ended with the crowd-pleasing slow jamz of Norah Jones. After dinner my grandma's friend is giving me some self-created aphorisms about success and my future career. One of my favorites being, "If you do your best and you're not at the top, then you just...you just do better!"

Yesterday I also got a ticket to the much sought-after Master Class interview with the Dardenne Brothers. These two are the famous Belgian directing duo of such films as "La Promesse," "L'enfant, and "Rosetta." The last two won the Palme d'Or. The line to get in was so crazy, you'd think people were waiting to see Santa Claus! I later learned that someone even fainted in line on the narrow stairs leading up to the Buñuel theater where the talk was held.

The brothers Dardenne at Cannes

The interview was in French, and there were headphones with translators which quickly got annoying because of the time delay for jokes, and hand gestures. When I got enough of the context, I'd try my own hand at translating the French and take the headphones off. The talk was two hours with movie clips in between; many people got up to leave before it was over. The Dardenne brothers talked about how they sometimes do their own casting and use people who've never acted before to make the stories more real and down to earth. They seem very humble and devoted to their work and you can tell that as famous as some of their films are, they're still very involved in all aspects of the production of the movie. They made a few jokes, and told some interesting anecdotes and by the end of it I wanted to go out and rent as many of there movies as I could. What is it with brother directing groups (Coen, Farrelly, Wachowski)?

Much later that day, I went to wait in line to see the premiere of "I Love You Phillip Morris," an American movie starring Jim Carrey. The line was waaaay too long, but that's where I literally ran into the actors from Dogtooth walking out of a bar. Dogtooth is this Greek film about parents who psychologically abuse their three children by never letting them go beyond their house's wooden fence. It's pretty twisted, but it is definitely one of my favorites. It's a sad situation, but seeing these 20-year-olds act like little kids can be cause for some funny scenes. I highly recommend it. 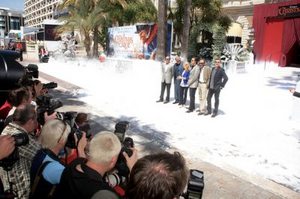 After getting rejected from "Phillip Morris," I walked down the Croisette with some buddies, looking at the idle paparazzi hungrily staring into everyone's face to make sure we're not important. We use the bathroom at the Carlton hotel, noted for hosting high profile celebrities. It's gorgeous inside, and everyone immediately notes our presence because we're not wearing Dior. There's a huge party across the street near the beach; we see neon lights and hear booming Euro-Techno music. We snag a table at the restaurant next to the Carlton, whose prices are a little more manageable and have dinner overlooking the busy nightlife of the Croisette.

• "Twilight" star Robert Pattinson was eating lunch on the Croisette today near the beach.

• The toilet paper in my bathroom at the hotel is 42 inches away from the actual toilet. Have you measured the length of your arms lately?

• Paris Hilton is in Cannes! Promoting some MTV documentary about herself (duh). She was seen on the red carpet tonight with Ryan Reynolds, I guess just as friends.

• It is 80 degrees and there is a huge exhibit for Robert Zemeckis' December release "A Christmas Carol" in front of the Carlton, complete with snow and miniature Christmas trees.

A taste of the Dardenne brothers at their master class, annoying English translation included.

Videos of stars and directors at Cannes on the red carpet here.