I walk the red carpet with no ticket 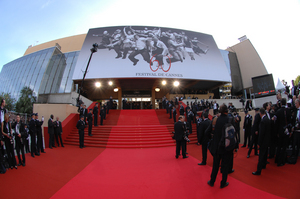 Tonight's premiere movie is Ang Lee's "Taking Woodstock," starring one of my favorite comedians Demetri Martin. Although I don't have a formal invitation to the red carpet premiere, I've decided to try my luck getting into the screening on different terms. Many companies give away extra tickets to the young people who stand outside the Palais with signs requesting them. Although it's not imperative that I see the movie at it's premiere, I think the experience will be fun whether or not I actually get a ticket.

Technically, I can see the movie tomorrow afternoon in a smaller theatre without this hassle. I just won't get to walk the red carpet, see Emile Hirsch (and Ang Lee), take pictures, dress up--and basically it won't be as good. Fingers crossed!

I arrived outside of the Palais all dressed up at 9 pm for the 10 o' clock showing of "Taking Woodstock." I made a sign using a sheet of paper from a legal pad and an ink pen, saying "Invitation to Taking Woodstock, SVP! ☺."

There were a surprising number of students out with signs, probably close to twenty-five looking for invitations onto the red carpet. Not only are these invationless students taking up space, but there's another crowd of people exiting the nearby theatre Debussy, plus paparazzi for the red carpet, as well as people with their own proper invitations. A madhouse. One of the University of Georgia students (very Brody Jenner-esque) was approached by a woman with an extra invitation who promised him this great seat in the theatre as long as he promised to be her "date" on the red carpet! 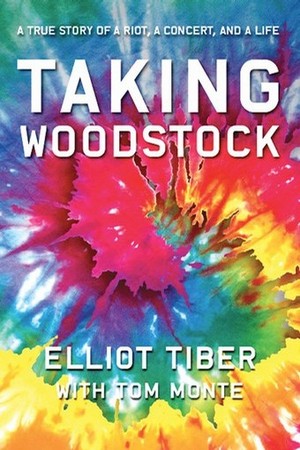 Even though I felt a little odd literally begging, it was comforting to know that there were about 20 other students nearby in the same situation. Most of the students I was with were approached by people with one extra invitation, and a few others who had been doing a lot of networking while here, pulled in some connections with company employees to get multiple invites. Unfortunately, I must have been standing in the wrong place at the right time, and wasn't offered a ticket, but one of the generous UGA students who had chatted up a guy with 4 extra invites shared one with me.

Walking the red carpet was an adventure in itself. Everyone with invitations lines up just long enough for all the women to apply lip gloss and fix their hair. Once you get the okay sign, you're allowed to slowly proceed onto the beautiful red, where there are cameras, more people, and extremely bright lights. We took as many pictures as we could on the red carpet until the events staff ushered us into the theatre to make room for the others.

The Lumière theatre is used only for premiere screenings and once I get in it's easy to see why. The place is huge and filled with thousands of people all dressed up and looking for seats. My ticket read balcony, and even though I was eight rows from the last in the house, I could see perfectly. Before the film, the screen was used to project the footage from the red carpet where close-up shots of Ang Lee, Demetri Martin, Imelda Staunton, Emile Hirsch and other "Woodstock" VIP's waited to walk the red carpet.

When the screen goes black everyone claps and for the next 10 minutes (even after the film has started) the applause is on and off in acknowledgment of various production companies, actors, producers, blah blah blah. 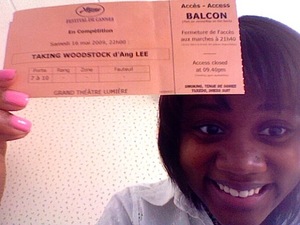 The movie was fun. It's a sweet story how this small town family looking to make money for their motel is positively affected by the new generation of hippies and the Woodstock Festival. There are lots of actors who show up during the movie that will look very familiar including Paul Dano ("Little Miss Sunshine," "Gigantic") Kelli Garner ("Lars and the Real Girl," "Thumbsucker") and Kevin Sussman ("Burn After Reading," "Ugly Betty"). Jonathon Groff, who plays producer Michael Lang in the film did a great job emitting this hippie charm that put a big smile on my face whenever he was on screen.

Walking out afterwards I noticed an entirely new crowd of young people begging for invitations for the midnight screening of the French film "Ne te retourne pas." The cycle never ends.

Earlier in the day I got to walk farther along the Croisette, which is the main street in Cannes. It's oceanside, kitschy but cute. The street "performers," are mostly just oddly-dressed men, spaced out along the beach. There's a carousel, ice cream stands and lots of commotion. It is very much a circus; I had to walk through a bubble machine just to meet up with friends down the street. Beside the Croisette is the beach where large numbers of people in tiny bathing suits lay out or wade into the water. On the other side there are designer stores like Gucci, Dior, Chanel, and all of that fabulous stuff and just a block or two beyond that are the hotels that typically host the festival film's actors.

The weather was much better today. The ocean brings in a breeze, and it's very nearly a perfect temperature. Since it's the weekend and the weather's nice there are twice the amount of people out in the streets.

• The French do food the BEST! I had my first Croques-Monsieur today on the Croisette.

• Lenny Kravitz was spotted yesterday afternoon by some UGA students, hanging around Cannes because of his part in the Lee Daniels film "Precious."

• I got a glimpse of Tilda Swinton walking the red carpet last night to see "Taking Woodstock." She was without her young lover Sandro Kopp.

*The producers of the vampire movie "Let the Right One In" let on yesterday that an American remake of the Swedish favorite is in the making--keep an eye out for that in the near future.

Intro to the international pavilions