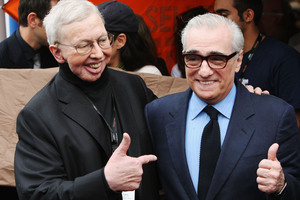 Friday, May 15--Today it rains, which changes everything. Yesterday the air was so European with cigarette smoke and hints of ocean musk. Today the air is damp, humid and rainy. A little sad. My first full day at Cannes! This afternoon the American Pavillion named their Conference Center in honor of grandfather. He has done a lot of Q and As and interviews there. There was tons of press, and Martin Scorsese was there to do the dedication. Everyone was excited and full of this nervous anxiety to do their jobs right at all costs. Afterwards in the Green Room, I had the honor of meeting the director of the festival, Thierry Frémaux. I also met some great friends of my grandfather's, the very French Pierre Rissient, who he just wrote about; the Australian director Paul Cox, Uma and Gerson da Cunha from India. These were only a few of the people touched by grandfather's genuine personality and devotion to the art of cinema.

Last night, after picking up my official Cannes backpack and some free "Nespresso" I got a tour of the key locations at the festival. Cannes isn't all about the business; people are really here to enjoy themselves. The WiFi Press Lounge is full of people typing on laptops and laughing with friends, and the oceanside American Pavillion has a steady flux of people coming in for quick espressos, leisurely lunches or some of the $1 candy set out in a huge plastic jar. No matter where you are, how much money you have, or what celebrity status you may flaunt, it seems people just cannot resist cheap candy bars. 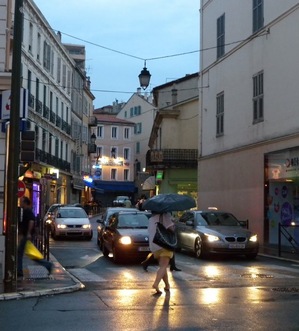 I also saw my first Cannes film today, "Air Doll," a Japanese film by director Hirokazu Kore-eda about a blow-up doll which one day acquires a soul. While the film's intriguing plot drew many viewers, the obvious symbolism reminded me of an assigned movie for a film analysis class. After "Air Doll," we headed over to La Pizza, a popular restaurant place for Cannes regulars, including my grandparents. Although it rained today and I'm pretty sure I'll have to do damage control to my hair soon, I'd say it was a successful first day.

Tomorrow I plan to sit in on a talk with representatives from the Swedish film, "Let the Right One In" along with some University of Georgia students. Hopefully being around some peers will help bring out some of my youthful energy that has somehow been overshadowed by press events, rain clouds, and jet lag. There are so many questions, and so much to still be explored at the festival. Things I hope to address in the coming days include: fashion commentary via red carpet watching; people watching via walking on the beach near the pavilions; and also, the peculiar set up of my room at the Hotel Splendid and maybe most importantly WHY people only cross the street when the signs say "don't walk!"

Next Article: I walk the red carpet with no ticket Previous Article: I'm doing some version of "great"

Also from Raven Evans from Cannes

I walk the red carpet with no ticket

I'm doing some version of "great"