A fake paparazzi, lots of films, funny stories, and I walk the red carpet 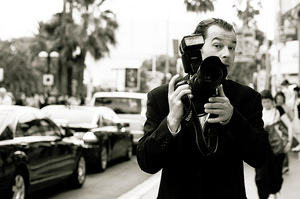 The daily total of times I've been body slammed by someone or almost run over by a car are slowly decreasing as my days at Cannes increase. Being at Cannes takes some adjusting, but I now feel like I can flaunt my knowledge of all things Cannes. I've learned a lot about this festival since I've arrived. I've finally learned the complicated class system at Cannes that is exhibited through badges. It begins with a Cinephile pass, then Festival, then Marché and on to the highly coveted Press badges. Of those the best is the white press badge that allows access to private screenings and tickets to every premiere. I would like to retract my statement about Cannes being all about having a good time. The business that happens at this festival is what keeps it around. The market in the lower level of the Palais where companies buy and sell films is always busy, and over the years several films have been famously sold over dinner or lunch in one of the fabulous hotel restaurants.

I've experienced the crowded streets, beautiful beaches and aggressive market badge holders and enjoyed every second of it. I ate lunch at the Majestic, known for hosting the famous Billy (Silver Dollar) Baxter and more recently an open WiFi computer lounge. My grandfather's blog entry on Billy Baxter made me wish that I had gotten the opportunity to meet him, and I tried to envision him at the fancy bar calling the staff members "Irving." I was also invited to dine at the Carlton with my grandparents and some of their friends the other night. The greatest story tellers I've ever met have been friends of my grandparents, and the dinner did not disappoint. 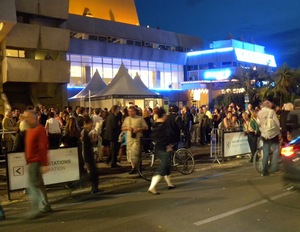 During dinner I was happy to sit back and listen to them reminisce about the Cannes Film Festival's evolution over the past twenty years. It's inspiring to see old friends truly enjoying each other's company and conversation. They quiz each other on film trivia, and joke loudly about the most outrageous Cannes moments while enjoying a great meal.

I went an hour and ten minutes early to wait in line to try to see the Quentin Tarantino movie, "Inglourious Basterds." I brought my iPod and some Sudoku puzzles, but ended up talking with the people around me in line. A kind South African lady let me in on the best way to get premiere invites, and I met one of the directors of the Jakarta Film Festival. With an hour of waiting to go, I was more than 10 people from the front of the line. I learned that people don't like when their Tarantino is jeopardized. After 30 minutes into waiting, neither did I. At 45 minutes of waiting, I needed to see this movie. It was an exclusive directors cut with 28 minutes. of footage that wouldn't be released to the public until the movie's DVD release! After an hour of waiting, getting into this screening became of life or death importance.

I was entertained by "Inglourious Basterds." Some parts were signature Tarantino with a few overly bloody scenes and the unexpected music, but I was into the story and really liked the ending. During the two and a half hours of the movie, I never checked the time, or thought, "this could be over anytime," which is impressive considering my attention span. 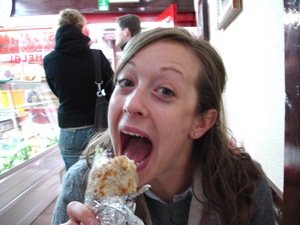 After "Inglourious Basterds," I went with some of the University of Georgia students to grab a bite to eat and watch a soccer game at the French equivalent of an Irish Pub. The pub is pretty typical, the bartender is in the front playing pool while people are watching the game, and the few groups inside are taking advantage of the 15-beers-for-15-euros deal. After stopping next door to get a kabob and fries I realized that my phone was dead, and that I did not want to walk through these less crowded streets of Cannes at 11:15 p.m. by myself. I slept in the student residence in Juan-Les-Pins with the UGA students, who are members of a film class being taught by Prof. Nate Kohn, the director of Ebertfest.

It's two trains stops away from Cannes, and a quaint beach bum type of town that houses a lot of festival attendees who can't afford to stay in Cannes, or didn't book their tickets eight months in advance. I stay with one of the program directors, Anna, who has a huge apartment-style room. Anna's friends from home are also visiting, a couple from New York who are backpacking through Europe. They've already hit six countries in ten days, but by the morning are surprisingly energized.

Later that night, I walked the ten steps from my grandparents' Hotel Splendid over to the Arcades theatre to see the Canadian movie "Amreeka." I earlier saw "New York, I Love You" and "Dogtooth" there. I've really come to appreciate the location of their hotel. Five minutes from the Palais. Less than one minute from some of the smaller theatres and right on restaurant row. There's a phone shop, a Haagen-Daz, the local Monoprix, a hair salon and all of the shopping places you could ever need right down the street. 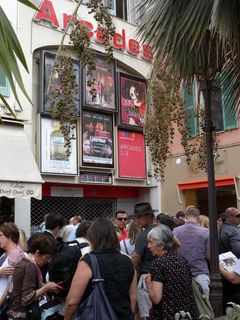 Right across the street

Yesterday I am on my way to one of the student talks with Michael Phillips of the Chicago Tribune. When I get to the Dolce & Gabanna store on the Croisette, I notice a huge crowd and a limo parked on the sidewalk. First I just want to go past it and continue on my way, then I get curious and want to know what celebrity is inside. As I push my way to front, I'm asking people, and no one seems to know. People are lined up across the street with cameras to watch this person's private shopping session and they don't even know who it is!? I catch a glimpse of a blonde lady coming out of the store, I don't recognize her so I abort that mission and keep moving down the Croisette.

About three steps away I get stopped by a photographer. One of these paparazzi types who wants to take my picture. I'm already a few minutes late, so I decide to have some fun and pose for this guy on the busiest street of the festival. Because of the huge crowd behind me, the people walking in my direction think for a minute that I'm the Dolce and Gabanna celebrity. People are pointing at me, and whispering and staring as they walk by. After the guy's done, I realize he's just one of those beach photographers and now I'm invited to the Carlton Beach to see his slideshow of photographs including mine which I'll be allowed to buy. My fifteen minutes of Cannes fame.

I get to the Hotel Canberra for the Michael Phillips talk. I shake his hand and he acknowledges the success of this blog! I am flattered and a little intimidated considering how great of a writer he is, compared to my daily ramblings about the festival. He gave great advice to the students whose main homework assignments for the next two weeks will be to write movie reviews. He recalls similar situations, sympathizes with their length limitations, and their writers' block and warns them against the always tempting "the plot revolves around..." introductions. He kept his talk relatable and witty which made it even more enjoyable. The students found him extremely helpful and even I am trying to make sure I can apply some of his advice in my writing. 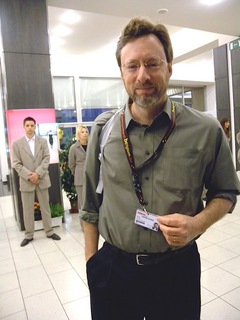 Michael Phillips and his White Badge (of course)

Last night's premiere was "The Imaginarium of Dr. Parnassus," Heath Ledger's last movie in which J. Depp, C. Farell and J. Law help complete his character's role. I was a little disappointed. The main female character played by model-turned-attempted-actress, Lily Cole was not very persuasive. Towards the end of the movie some of the scenes are so unbelievable it becomes funny. One scene in particular comes to mind when Lily Cole is running through a black tunnel, typical wind in her hair, and there are shards of glass whizzing past her face as she smashes them with her fists while yelling frustrated exclamations like, "I hate you!" and "it's not fair!" She's like an over-dramatic Alice in Wonderland.

The closing ceremony was Sunday evening where the awards for the best film in competition, or the Palme D'or, was given to Michel Haneke's film "The White Ribbon." The film I mentioned in the last entry, "Dogtooth," won the competition for its category! While it wasn't in competition for the Palme D'or it was recognized with Un Certain Regard which is a category of films that is still good, just not (according to Cannes) of competition status. Many people were shocked that "Dogtooth" won, expecting the honor to go either to "Precious," which seemed to be a crowd favorite, or "Police, Adjective." Now that "Dogtooth" has won the competition, I'm relieved, since I've been recommending it to people. At least if they don't like it, I can say that the Cannes Film Festival jury voted it the best film in its category. That sounds impressive, right?

Going in to the awards, I got to walk the famous red carpet and attend the festival's after party dinner upstairs. It was a great way to end Cannes, and descending on an empty Palais escalator afterwards was a little sad, but when I think of all I've done here, I am more than pleased.

In three days it's back into the real world, where I'll have the pressure of finding a summer job (anyone need an intern?) and seeing as many relatives and old friends as possible. I appreciate everyone who has taken the time to read my entries, and I will be sad to depart with this blog. Thank you for all of the generous compliments and words of congratulations. I took full advantage of my time at the Cannes Film Festival, and can only hope that I find myself here again in the company of great people and great films.