You Have to Kill the Judge: Parker Posey on “Irrational Man,” Woody Allen and Christopher Guest

There a scene in Christopher Guest’s 15-year-old comic masterpiece, “Best in Show,” where Meg Swan (Parker Posey), the hyper-neurotic co-owner of a long suffering Weimaraner, bursts into a pet store, looking for a squeaky toy identical to that of her dog’s missing “Busy Bee.” A genial clerk calmly suggests a few toys that have similar colors, but Meg grows increasingly livid as each item is presented to her (“No, that’s a bear in a bee costume…That’s a parrot…This? This is a FISH!”). Meg’s insistence on retrieving a Busy Bee toy in the final moments before her dog’s debut at the Mayflower Kennel Club Dog Show is absurd in a rational sense, and yet Posey tackles her character’s mounting hysteria with a seriousness and intensity that make it all the funnier, as well as achingly human.

This is one of many unforgettable characters in the screen career of reigning “Indie Queen” Parker Posey, who collaborated with Guest on four, improv-based features, starting with 1996’s equally uproarious ensemble piece, “Waiting for Guffman,” where she played a Dairy Queen worker perpetually lost in her thoughts. Her latest film, “Irrational Man,” marks the actress’s first time working with iconic director Woody Allen. Joaquin Phoenix stars as Abe, a philosophy professor who attracts the smitten attention of a student, Jill (Emma Stone), and colleague, Rita (Posey), despite his belief that life has grown meaningless. Only after stumbling upon the havoc supposedly wreaked by a corrupt judge does Abe find a renewed sense of purpose. He will leave a positive impact on the world by committing a morally justifiable crime: killing the judge.

Posey spoke with RogerEbert.com about the ageless appeal of Woody Allen, the benefit of limited takes and the advice she has for filmmakers seeking to master the art of improvisation. 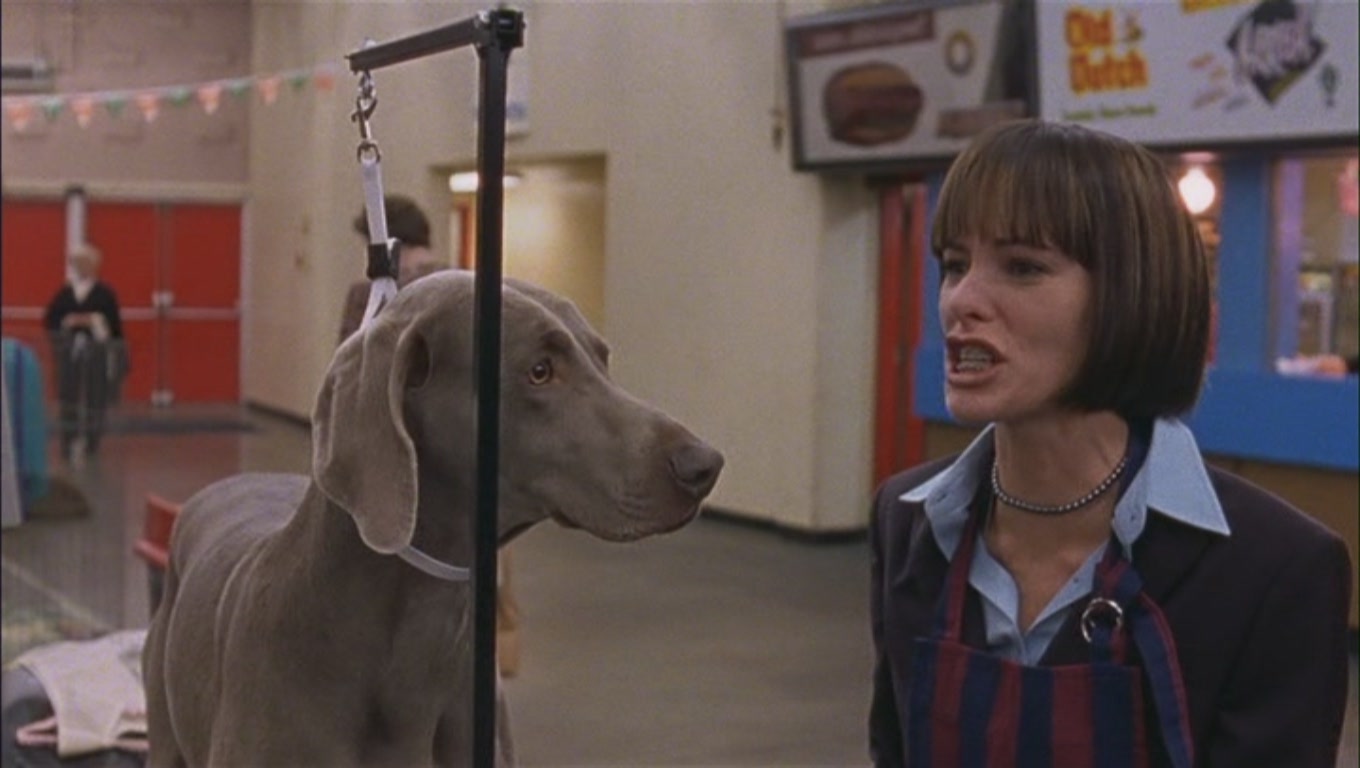 I’ll just start right off the bat by saying that “Best in Show” is the funniest film I’ve ever seen. How do you go about approaching a character like Meg Swan?

I just play it for real. When you get into the character, you have to take it so seriously because if you start laughing, you’ll mess up the take. Since the take is improvised, it will never happen in that particular way ever again. You’re never repeating anything, you’re just building from one take to the next, and the takes are very few. You usually don’t remember what you said. It’s the situations that are funny, and you just play them for real. People are funny, they just are. You either have funny bones or you don’t.

So many people have come up to me saying that they’re just like Meg Swan in “Best in Show,” or that their sister is just like her, and I’m just like, “What?!” [laughs] There was a scene that was cut with me and my housekeeper, where I discover that Beatrice, our dog, has pooped in my husband’s slipper. The idea that Beatrice would be so upset after catching my husband and I having sex that she would deliberately poop in his slipper was so funny to me.

No one works like Chris does. We get an outline and then we build on each moment. For example, during the audition scene for “Red, White and Blaine” in “Waiting for Guffman,” the outline says that Ron [Fred Willard] and Sheila [Catherine O’Hara] are reenacting their favorite coffee commercial. In the film, you see them sing, “Midnight at the Oasis,” at the audition, and then at the very end, Catherine says, “Would you care for a cup of coffee, Ron?” So they created all of that around this little bit. We were all really nervous that day. We were really auditioning. I was 25 years old, I had never met Bob Balaban, and I was easily taken into the world of my character. Those movies are really special to me. They are so intimate, and the experience of making them is so much about trust. The comedy borders on pathos, and it comes so close to being really dark. It’s a really thin line that we’re treading, and Chris has talked a lot about that with us.

The deleted scenes for Guest’s films are as great as anything that made the final cut. The song, “This Bulging River,” which can be viewed on the “Waiting for Guffman” DVD extras, is, in many ways, the heart of the film.

We rehearsed the entire play, and it was an hour long. As we were filming it, Chris would say, in all seriousness, that we could really take “Red, White and Blaine” to Broadway. I think we still could. He’s had meetings about it over the years. His movies are so loved. Eugene Levy in “A Mighty Wind” and Catherine O’Hara in “For Your Consideration” are amazing. 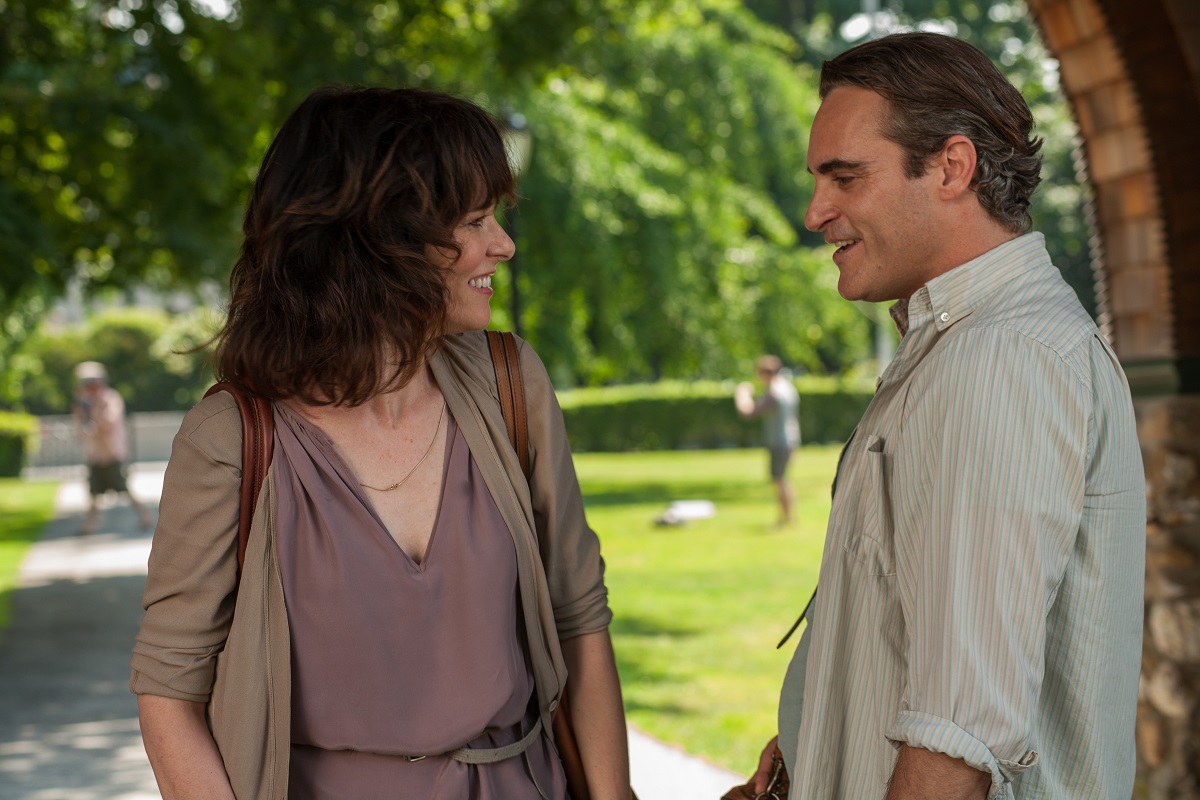 What has Woody Allen’s work meant to you, as an actor and as a person, prior to working with him?

What sticks out the most is the way that he writes women. Over the years, I’ve watched his movies and felt like a lot of them, in different ways, brought out qualities in their female characters that many writers don’t even attempt to portray anymore. It feels like a lost art more and more. I felt that way about “Hannah and Her Sisters,” which I recently watched again. I remember Sandy Dennis in “Another Woman”—her strength and her suffering and her bitterness. It’s very Russian and I love how Chekhovian it is. I read “Crime and Punishment” in high school and also worked on Chekhov in college. That yearning and that desire in the face of not being able to leave, to go to Moscow, was so touching, and I’m so happy to play a woman like that in this movie. She obviously has a life, you just see it in little bits.

A moment that got a big laugh at the screening room was when Rita tells Jill that she’d “still leave with” Abe, despite the probability that he has committed murder.

It’s like she’s musing, she’s on her way to Moscow. And it’s very true that at a certain point in your life, the desire overrides the truth. It’s about her own potency and her own vibrancy, which is separate from him. That fantasy is her’s and it isn’t desperate, it’s insightful. We are so tight and so limited as a culture that we make these generalizations—especially about woman—that are degrading.

Rita may be the strongest character in the movie. 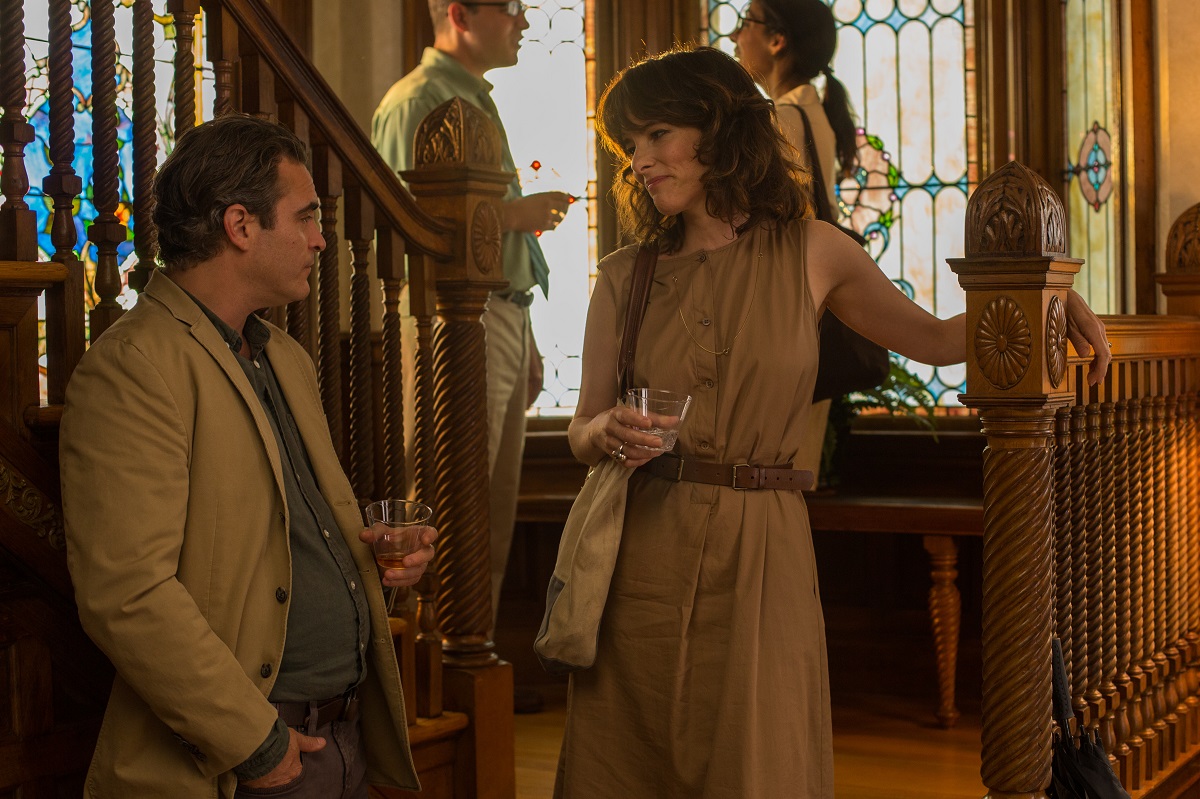 It’s clear from the Cannes press conference that the creation of art plays a profound role in giving Allen’s own life a sense of meaning. Does art play a similar role in your life?

Totally, and you have to kill the judge. [pauses] There’s another way to look at the movie through the eyes of a true auteur. One of the ways I looked at it was that it’s about the philosophy of making art. It lives in water and it lives in memory. We teach and we learn. We express the yearning—and good and evil—and the question…and we kill the judge.

As an artist, I don’t want to compete with anyone. How can you measure one person against another? It’s very uncomfortable to go to a party and be around other actors or actresses who give you an attitude or are blatantly jealous. They don’t see the big picture and they want to compete. Art is how I make sense of my life. It’s given me a partner—the relationship to the material and to my life and how my life feeds into my art and the story. There’s a richness there, and it’s why you keep doing it. Woody has been making [his work] rich for years.

Joaquin is a master of his own realness, and the two of them together were just beautiful to watch. They are so different, but they play the same tune. I only worked on the film for seven days, and working with Joaquin was a great experience. You want another actor who has a lot going on, and he has a great feel for the real. It takes a certain maturity to play on that level, with that intensity, because the expectation is to get it in one take. Woody’s done a lot of movies and you don’t want to waste his time. In fact, my childhood friend lives across the street from where Abe lives in the film. They location scouted his house, so after a day’s work, I got to go across the street, sit on his porch and drink a beer.

I loved when Woody said at the conference that he had always wanted to cast you because of your name.

[laughs] He said something about that the other day, too. He said, “She has such a silly name,” and I was like, “How do you think my mother felt?” My mom had always wanted to name her daughter Parker and then she met my dad with the silly last name. 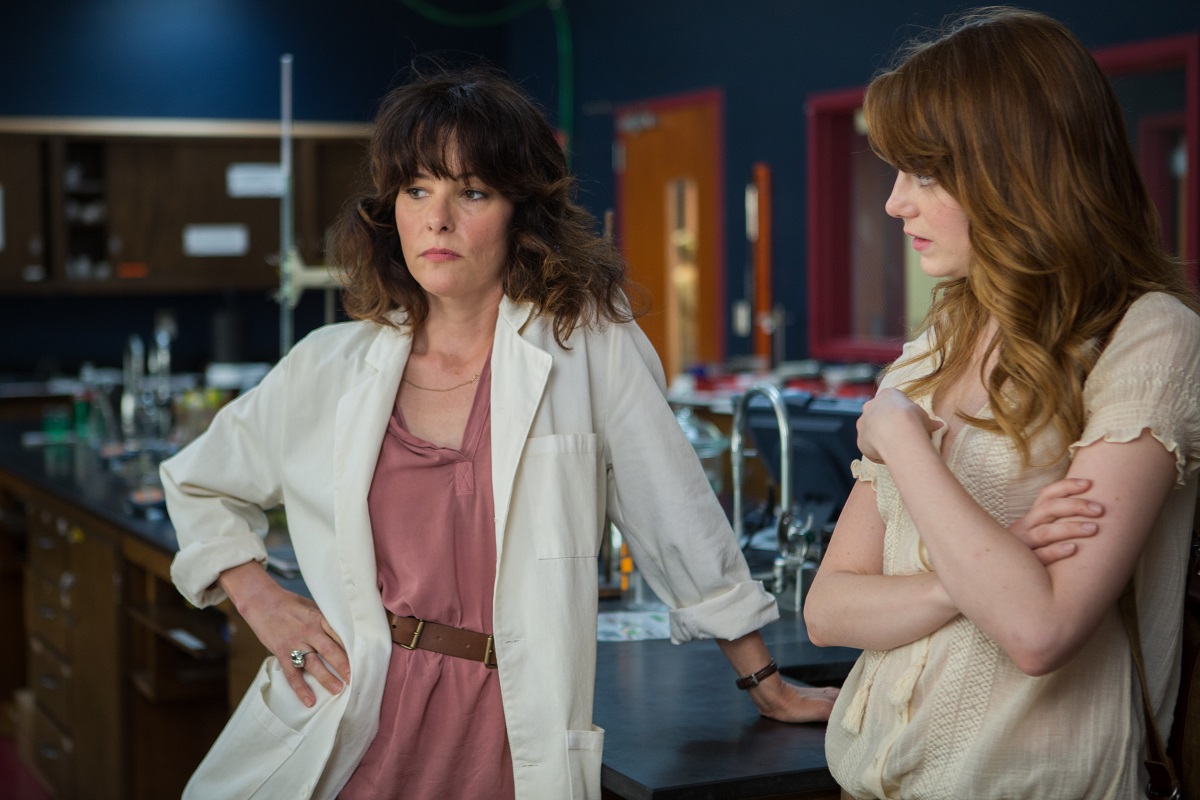 Do you thrive in working within a limited number of takes?

You never want a scene to get beaten to death. I’ve always been like that. In college, I didn’t like to rehearse and no one wanted to do scene work with me, because they knew that I would try to get out of rehearsing. [laughs] You don’t want to beat it to the ground and lose what you have when it’s happening in the moment. You want to bring it that sort of energy that you feel in the theater. You want that life and spontaneity onset.

Many young independent filmmakers, inspired by the “mumblecore” movies of directors like Joe Swanberg and Andrew Bujalski, have attempted to make unscripted movies with varying degrees of success.

I love Andrew Bujalski. “Computer Chess” is one of my favorite films of the past few years.

But it seems that so many filmmakers have misunderstood the essence of improvisation, and how much preparation goes into it.

What would be your advice to them?

Watch the films of Mike Leigh and go for something that is real. You can start by just hanging out with your friends that you want to collaborate with. If you’re a director, start hanging out with actors and share your stories about a situation. Make sure that you’re always listening and picking up on the truth of someone else, which is going to make the art that you create together a lot more interesting. I think what can happen with this improv trend is that you’re waiting to get your word in, but you should get the story in first. Understand the universe of your character. Be spare with your words and then write them down. Everyone is so different, everyone has a different style. To really collaborate is to know the wholeness of the person you’re working with. I don’t know how Chris does it. We’re making another movie together, and it’s very complicated to craft those outlines.

The fact that modern technology enables filmmakers to shoot limitless takes of each scene likely dilutes many films of their spontaneity.

It drives me nuts. There’s no commitment. You have to commit. I feel that digital technology tends to make people distracted and results in the sort of hipster films that are purely generational. It’s not going to translate unless you really start digging as an artist.