Making the Cut: Imogen Poots on "Knight of Cups"

As most moviegoers probably know by now, just because someone is cast in a film by enigmatic auteur Terrence Malick, that does not necessarily mean that they will turn up in the final product—Rachel Weisz, Jessica Chastain, Amanda Peet and Michael Sheen all reportedly shot scenes for his previous film “To the Wonder,” and none appear in the final print. Similarly, Adrien Brody saw what he thought was the lead role in “The Thin Red Line” shrink to virtually nothing in the final theatrical release. Nevertheless, his reputation as a great filmmaker is still enough to entice many stars to sign on for his films in the hopes that they will not wind up on the cutting room floor.

His latest film, the strange and fascinating drama “Knight of Cups,” contains a number of familiar faces, including Imogen Poots, the wonderfully named British actress who caught the attention of moviegoers in films like “V for Vendetta,” “28 Weeks Later,” “Me and Orson Welles,” “Fright Night” and “She’s Funny That Way.” In “Knight of Cups,” she plays Della, one of a number of women (a roster that includes characters played by Cate Blanchett, Natalie Portman and Freida Pinto) involved with an ennui-stricken screenwriter (Christian Bale) struggling to find some kind of meaning in his otherwise hedonistic existence.

Poots will soon be seen in such diverse projects as the thriller “Green Room,” the Cameron Crowe-produced Showtime series “Roadies” and a film project from the Lonely Island guys. She recently got on the phone with RogerEbert.com to talk about “Knight of Cups," the singular experience of working with Terrence Malick, and making it to the final cut.

What was it that first got you interested in becoming an actress? Was there a particular film or performer that particularly inspired you?

Oh, sure. I guess the first real film that I thought was really something was “Some Like It Hot.” I thought that film was pretty extraordinary. Ironically, another one—and it was the complete antithesis of “Some Like It Hot”—was “Badlands.” I believe that was one that my dad showed me, and I just found Sissy Spacek to be so magnetic and compelling. From there, each film sort of introduces you to something else—you go from Sissy Spacek in “Badlands” to Altman films and stuff like that. It is an exciting and never-ending education. “Badlands” was a real twist in the sense that your brain just isn’t the same after that.

How would you describe “Knight of Cups,” and the role that you play in it?

In trying to describe “Knight of Cups,” I think you come away from it with a multitude of different feelings and I think that the film itself is like that. There are moments of euphoria. There are moments of confusion and chaos. There is obviously a lot of religious imagery in it as well and seeking of the truth. I think it is nice because there are these stereotypes and archetypes, but I think they do blend together in a surreal kind of way. It is covering a man’s quest and that quest will mean something different to each viewer. For myself, I resonated with some moments that I thought were actually quite funny, like when Christian Bale’s character is at his agency and he is subjected to these redundant conversations with people about nothing—for me, that made total sense.

In terms of Della, again, it was this impulse. I saw her very much as this impulse. You know when you walk into a Terrence Malick project that you are not going to have a specific formula or have a linear and drawn-out narrative responsibility. You are going to be given an idea about something —especially with his work now—and that is pretty much what happened. Terry Malick said to me, “She is like smoke,” and you take what you will from that.

What is the casting process like for a Malick film?

I got a call asking if I would like to audition and I said “Yes, of course.” I made a tape in Los Angeles one time and that was pretty much how it happened.

Since it has been reported that “Knight of Cups” did not have a formal screenplay to speak of, I was wondering what, if anything, it was that you were given to work from instead.

Quite a lot, actually. There were a lot of notes. He doesn’t always work this way, but on “Knight of Cups,” there a lot of notes and a lot of ideas. They weren’t scripted and they weren’t things that you were supposed to memorize and explore during the day. They were more like questions—the important questions that you ask yourself when you play any character. On the set, Malick would suggest something for you to say in the moment. It was a very exotic and unique experience working on this film. I have never had an experience like it before.

As an actress, how does doing a film like “Knight of Cups,” where everything is very free-form and non-linear, compare to the likes of “She’s Funny Like That,” the screwball comedy that you did with Peter Bogdanovich which contains a very classical narrative structure? Do you prefer one approach to the other or does it simply depend on the material that you are working with?

Each film will be challenging in a different way. It is quite interesting how Bogdanovich and Malick are both filmmakers who were working in the Seventies. I think that speaks volumes to how vastly different the filmmakers are. I think each one has its challenges. When you walk into the Bogdanovich picture, you see that it is a screwball comedy like “Noises Off!” and that it is very different than Project X—you are walking into this filmmaker’s vision and you know that what is going to happen, especially with these directors who have been so prolific. You can immerse yourself in their work and their world and know what you are getting into. Nothing comes as a surprise, as such—it is the challenge of being in this universe and figuring out how to function and collaborate here. It is a sort of education as you go through it, if that makes any sense.

Of course, one of the other challenges of working on a Terrence Malick film is the very real possibility that you might not even make it to the final cut. He has a reputation for excising entire roles filled by top-name stars while in the editing room. Obviously, you did make the final cut, but were there any scenes of note involving you that were shot and then left on the cutting room floor?

I am pretty surprised because the majority of what we shot is in there. Obviously, it is reduced because we shot for long periods of time and just snippets of those scenes have been used. You don’t expect to be in the film—that is really the only way you should go about it. You should just turn up and do it, have whatever experience you have and then leave. I didn’t know anything else about the other characters or anything like that, so I see it as a kind of puzzle to put together. You actually begin to understand what your role was more. 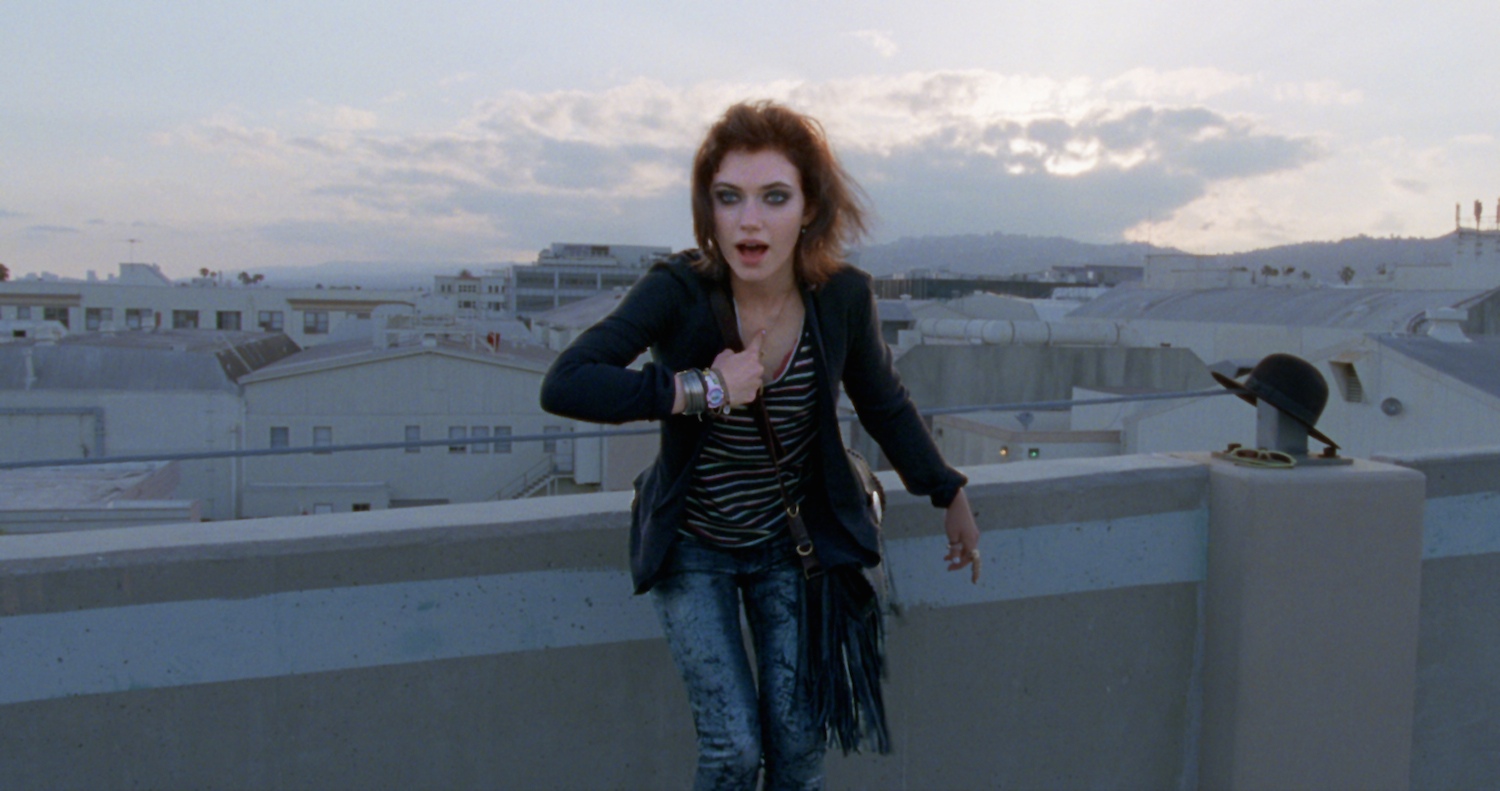 What was you immediate response after the first time you saw the finished film?

I was quite overwhelmed by it. Visually, the cinematographer [Emmanuel Lubezski] is a genius. I, like any other audience member, was intrigued to see it and find out what it was all about and how Malick was going to execute this man’s quest. I resonated with the loneliness—I thought that was pretty wonderful. It almost sedates you in the way that Christian Bale’s character goes through this world. I found that you could get great relief from knowing that you were his passenger because of the nature of what was happening and how oversaturated some of the moments were. After I saw it, I called my mom and told her that it was one of the best films I have seen. It is the kind of film where, if you were an actor, you would want to see it. I knew that I liked it and I knew that I understood parts of it but I also knew that there would be many people who would say “Oh, it is about this” when it is really an individual’s perspective. It is going to encourage and promote discussion and that is always interesting when people can talk about cinema.

I wanted to wrap up by asking about a couple of interesting projects that you have coming up very soon. The first is “Green Room,” the new film from Jeremy Saulnier (“Blue Ruin") that debuted to great acclaim at Cannes last year and which is opening next month.

“Green Room” is a film about Nazi skinheads and a punk rock group stuck in a tiny room. Jeremy is an extraordinary director and I was lucky to be a part of it. I loved playing that role deeply. It is essentially a film about people in close quarters, and I think it has a sort of “Lord of the Flies” element to it in terms of how the characters emerge under the circumstances. I love it very much.

The other one is “Roadies,” the upcoming series for Showtime that was co-created by Cameron Crowe.

In that, I am an electrical technician. It is about a rock band but it is really about the crew that travels with them. Cameron was a music journalist so most of the characters are based on people that he knew. I loved working with Cameron—it is a very specific experience. His love for music is very much out there and is felt on the set. I love playing that part—she was a lot of different things, which is always exciting when you get to play a role like that.