Hollywood Beginning: Eugenio Derbez on “How to Be a Latin Lover”

When Eugenio Derbez’s 2013 family comedy “Instructions Not Included” became the highest-grossing Spanish-language film in the United States, that was but a new beginning for the superstar actor/writer/director/producer. Having previously displayed his talents for performance and storytelling on Mexican TV (with shows like “La familia P. Luche” and nutty sketch comedy “XHDRbZ”) his next step was to take on Hollywood, with his first English-language starring role occurring in this weekend’s charming comedy “How to Be a Latin Lover.”

Directed by Ken Marino (actor from “Wet Hot American Summer” and director of “Bachelor” parody series “Burning Love”) the film has Derbez playing a gold-digging, boyish playboy (parodying the likes of Julio Iglesias or Mauricio Garcés) who has to move in with his sister (Salma Hayek) and nephew (Raphael Alejandro) when he is kicked out of his older rich wife’s extravagant lifestyle. As it expresses the value of family and maturity like with his accidental-dad saga “Instructions Not Included,” the comedy of “How to Be a Latin Lover” pops with Derbez's fleshed-out, limber performance and rotating supporting cast, which includes the likes of Hayek, Michael Cera, Rob Lowe, Kristen Bell, Rob Riggle, Rob Corddry, Raquel Welch and more.

Watching Derbez in this pre-summer surprise is like witnessing a true professional more than prepared for his widest audience yet, who has promise to make an impression in the world of comedy and drama akin to Woody Allen, Maurizio Nichetti or Derbez's favorite, Peter Sellers. I spoke with Derbez about the fear he experienced in making his Hollywood debut, how Adam Sandler's house staff got Derbez a role as a gardener in Adam Sandler's 2011 film "Jack & Jill," Derbez's desire to remake "Being There" and more.

After watching “How to Be a Latin Lover,” I was pleased to find out that a lot of your stuff is currently on Netflix.

So you watched “Instructions Not Included”?

Yes, and I had your theme song from “XHDRbZ” stuck in my head when I was coming downtown.

Or “La familia P. Luche”? Did you watch that?

I haven’t seen that yet, no. But if that is what you recommend to go next …

Well, everyone right now are crazy about “Familia P. Luche.” It’s this dysfunctional family, but it’s something really crazy, it’s like a cartoon. The colors really pop and we are dressed all in the fake fur thing. Really crazy, and the acting is over the top. It’s like a cartoon, but in real life. And it’s been huge in all Latin America. I mean, people in the streets, they talk more about “Familia P. Luche” than everything else. They love it.

Are you interested in making a movie of that, or bringing it to Hollywood?

Yes, we are working already on an animated version of the film that is going to be in Spanish.

Well, this is my first time starring in English, so that was scary. I moved to LA like two and a half years ago and we started to develop the next movie. Because after “Instructions” my life changed, a lot of doors opened. So, I made the decision. I need to close my life in Mexico. Everyone thought I was crazy. I swear, people were like, “Can you please not do this? You have a career. You are not a kid anymore. You’re throwing everything to the garbage.” And I was really concerned—I closed my office, my home, I say goodbye to my friends, I took my luggage and my dog and my family and I moved to LA. It was a crazy thing, but I opened an office in LA and thank god everything worked, everything. I feel really blessed. I had a lot of doubts. But when I was flying at that exact day, when I was flying from Mexico to LA with my family, luggage and everything, as soon as we touched in LA we turned on our cell phones and it was like bup-bup-bup-bup and they told me when we arrived that I got the star on the walk of fame in Hollywood. So for me that was a signal, OK, I’m doing the right thing. I thought it was a prank or something but I was doing the right thing. So I said I’m going to open an office and do everything, and I would start developing the scripts and we started writing “Latin Lover,” was one of them.

And then when everything was ready, and we were about to shoot “Latin Lover,” we had a table reading. It was about two and a half weeks before we start shooting. And that day, I was panicked. I had a panic attack. I heard the reading, I didn’t read. And the guy that was reading was really good and I said, “I can’t do this. I don’t have the skills to do this.” So I went home and my wife was watching the TV and I turned off the TV and said, “Listen to me. I’m in big trouble. I must start shooting in two and a half weeks and I can’t do this! What am I going to do? Should I call Lionsgate and tell them I’m sorry?” I had a real panic attack. Big fear. And then the next day I really hired one person 24/7 to rehearse with me, an accent reduction coach and everything. And I really spent probably 20 hours a day rehearsing and memorizing blah-blah-blah to achieve this goal.

It’s funny that this true story echoed the previous story of “Instructions Not Included,” with your character finding your way to Hollywood and facing his fears.

What was it about Ken Marino that made you want him on the project? He brings with him a lot of comedians and I assume you had seen their "Bachelor" parody show, "Burning Love."

Because we were looking for a director, but at the same time we were concerned about someone who could understand me as a comedian. And we found that Ken was a writer, comedian, director. This is his first feature film but he directed a lot of TV, and we wanted someone who could ground the comedy. And we saw that “Burning Love,” it was like a concept that was already … “The Bachelor” is already a comedy! So it’s the same thing with a twist. We found that genius and we found that Ken could bring a lot of stuff to the script, and he was always rewriting, and his wife [Erica Oyama] is a writer too, so they were rewriting jokes and jokes and we loved that. That’s one of the great perks of Ken Marino, he’s a writer, he’s a director, and he’s an actor too. He’s very grounded and he’s very funny. 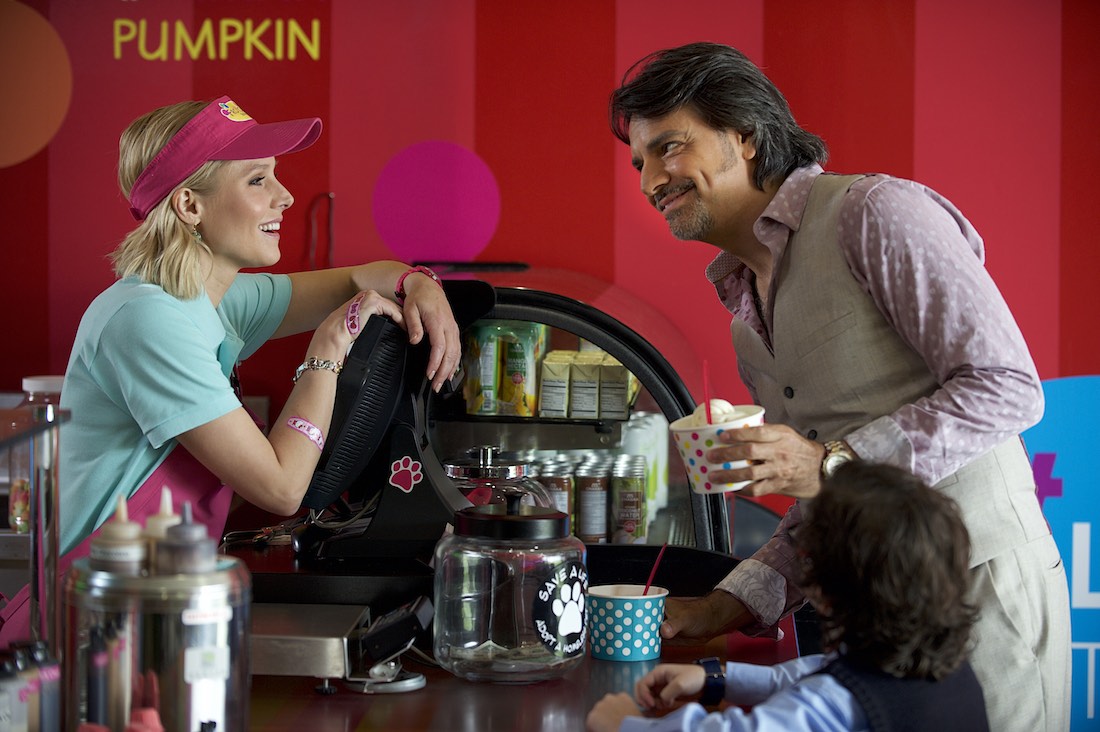 I was ready to see you in the movie but then everyone starts popping up like Rob Riggle, Rob Corddry, Kristen Bell, Michael Cera and so forth, and they’re all side characters getting a big moment in your movie.

And that was Ken. Ken brought a lot of his friends and we appreciate that because we have an amazing cast in the movie, amazing cast. I feel really lucky. And it’s like “Oh, Michael Cera! Wow!” I’m a huge fan of Michael. I swear we were acting in a scene and I was like, “Wow, he’s here!” I couldn’t believe I was talking to him. I was starstruck.

“Juno.” Well, all his work is amazing. He’s great. He just opens his mouth and you laugh. I love the fact that he is so natural. He’s just plain and he kills it. Amazing. And Kristen Bell, Ken was asking her for different takes. I swear, 15 different takes with 15 different intentions. And she was bringing new stuff every single scene. She’s genius.

Who would you say are your greatest comedic influences, as a comedian and overall entertainer?

Peter Sellers. Definitely. I love him. He was amazing. And actually, I have always wanted to do remakes of all his movies. But they keep telling me, “I don’t know, it’s dangerous. Don’t go there.”

I mean, we’re doing “Overboard” but I would love to do “Being There.”

I’m just concerned that those movies are so iconic that I don’t want to be the guy who is like, “He’s trying to fill his shoes,” y’know?

You would do it your own way.

Probably because it’s me, it would be more dangerous for Adam Sandler. But with a new guy, the new face who is trying to do something, it could be … I’ll probably do it. But hmm … Woody Allen was a great influence at the beginning of my career. I don’t like everything that he does, but most of it.

The early, funny ones?

No, the funny stuff I love, the drama I don’t like it, sometimes yes and sometimes no. But basically Peter Sellers and Woody Allen. And the new generations: Mike Myers I would say, and Will Ferrell. And Adam Sandler, who is a great friend of mine. 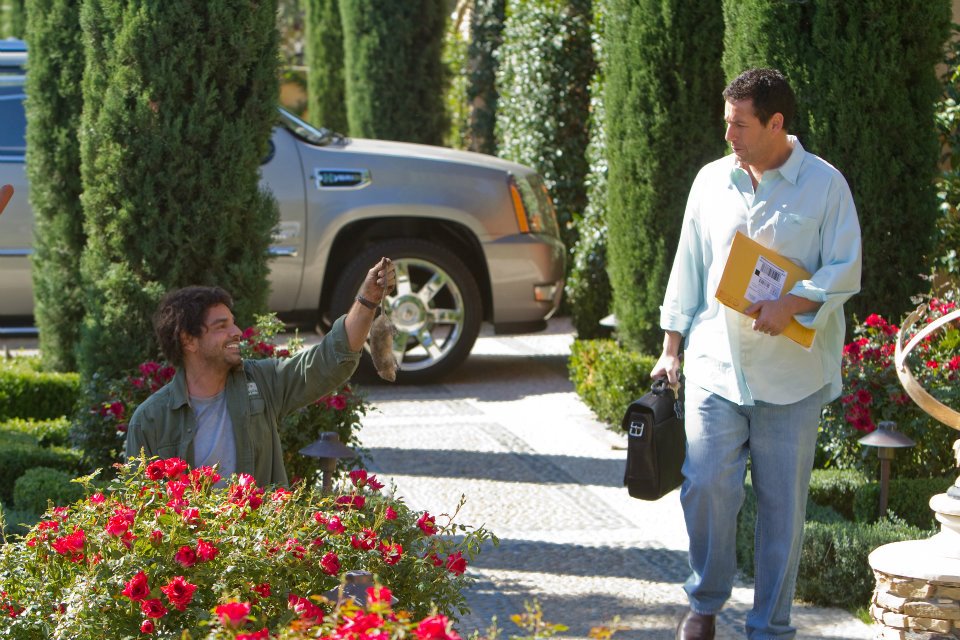 I was going to say, was it “Jack & Jill” that was your first movie with Sandler?

And you’re in his most recent Netflix movie, “Sandy Wexler.” What has been his influence, or did he help you find your way into Hollywood?

No, please tell me.

One day I was in Mexico and somebody told me, “They want you for Adam Sandler’s movie.” And I was like “What! Me? Why?” “They want you to go and do the casting.” So I flew to LA and I was waiting to do the casting and they said, “Do you want to say ‘Hi’ to Mr. Sandler?” And so I went into his office, shaking, and he was like, “Hi, I’ve heard a lot about you.” And I said, “Really?” “Yes, you know why you are here?” “No!” “Well, my nannies, my gardener, all my staff in the house are Mexicans. And I asked them who was their favorite comedian. And they say your name, and that’s why I called you.” So I was in “Jack & Jill” because the nannies and the gardener and the Mexican staff of Adam Sandler. They recommended me. They did more for me than my agents and my managers! [Laughs]

And then you were on “Rob!” [Rob Schneider’s TV show] and other projects.

And I did “Rob!” and then I did “Sandy Wexler." “Instructions Not Included” came out and my career started growing. It was like building from here from there, and it was huge.

Congratulations on this film, and I’m very excited about seeing your “Being There.”

Yeah! Me too. And it’s a great role, because I don’t have to do that much. But for my accent, it’s perfect. And it’s a gardener.