How to Be a Latin Lover

After niftily compressing more than a quarter-century of its central character’s early life into a tidy five minutes and a handful of seconds before any opening credits flash by, “How to Be a Latin Lover” all too quickly devolves into a nearly two-hour slog showcasing Mexican comedy superstar Eugenio Derbez’s attempt to seduce U.S. audiences with a cheesy bilingual spoof of an ethnic stereotype long past its expiration date.

Do we really need a South of the Border answer to Adam Sandler as a sort of Deuce Bigelow: Hispanic Gigolo? I vote no, even if the actor now and then flashes a bit of clownish panache as middle-aged gold-digger Maximo, who gets dumped by his abundantly wealthy 80-year-old wife (Renee Taylor in a Renee Taylor-made role) for a younger model in the guise of dweeby Michael Cera in a glorified cameo. When this tossed-out trophy husband protests that he should get half of everything, his soon-to-be ex reminds him that there’s a prenuptial agreement. He counters that what he signed was actually something called a “prenup.” His confusion is not unlike those voters who didn’t realize that the Affordable Care Act and Obamacare were one and the same—and is just about as funny.

Nor do we require a farce that might have been more appropriate as an outright R-rated romp but instead awkwardly chooses to be a PG-13 bring-the-kids outing. Now-penniless, the mooch moves in with estranged sister Sara (Salma Hayek) and decides to tutor his shy and fatherless 10-year-old nephew, Hugo (Raphael Alejandro), in the art of being a junior Casanova. Of course, Maximo has an ulterior motive: The kid’s grade-school crush has a rich widowed grandmother who just happens to look just like Raquel Welch because she is Raquel Welch—and he is determined to make her his next designated sugar mommy.

That means we are subjected to questionable cross-generational humor of varying degrees of silliness and stupidity. On one side are blatantly childish shenanigans including poop and fart jokes as well as a running joke where Derbez pours both Cap’n Crunch cereal and milk directly into his mouth so he can avoid washing dishes. On the other side is much more suggestive humor as Maximo employs such pseudo-naughty euphemisms as “poking” and gives Hugo—aka his “Minimo”—a demonstration on how to do a “sexy walk” that will drive the ladies crazy. When his uncle explains that women who witness his strut will think, “He must be great in bed,” Hugo smiles as he brags, “I AM great in bed. I don’t pee or anything anymore.”

Such wince-able tries at verbal ripostes might be why Derbez seems so fond of sight gags, such as Maximo regularly being on the receiving end of bodily abuse or the repeated spectacle of him waking up on his flattened leaky air mattress on his nephew’s bedroom floor. There is also a spa visit whose variation on manly defoliation is nowhere close to the classic scene in “The 40-Year-Old Virgin.”

To presumably better his chances of crossing over to English-speaking audiences, Derbez is joined by several Hollywood-bred second bananas including Rob Corddry as Welch’s wary chauffeur, Rob Riggle and Rob Huebel as two shady goons chasing after Maximo when he reneges on a business deal and Kristen Bell as an overly cheery manager of a frozen yogurt shop whose clawed countenance bears the scars of being a crazy cat lady.

But someone—probably Ken Marino, the "Wet Hot American Summer" star making his feature directing debut—should have thought twice about bringing aboard Rob Lowe as Derbez’s frenemy of a fellow male strumpet, who provides arm candy for Linda Lavin’s lascivious matron of means who likes to indulge in role playing. Not because there are already three other Robs in the cast, but because the onetime Brat Pack member clearly has perfected the knack of not taking himself too seriously. As a result, he upstages the film’s anxious-to-please lead at every turn. Posing as a pizza delivery guy, Lowe manages to milk a chuckle just by announcing that the box he is carrying holds “one extra-large sausage.”

As for Hayek, she is always a welcome sight, even when wasted as a straight woman. But the movie’s pacing would have been better served without her overlong, alcohol-induced, song-and-dance number that comes out of nowhere and doesn’t add much, save for proving her character needs to let her hair down. And don’t get me started on the sexy walk-off featuring civilians on the street that ends the movie—along with bloopers, natch.

Ultimately, “How to Be a Latin Lover” doesn’t know how to be a comedy—at least not a 21st century one that can get away with dopey double entendres while promoting the importance of family ties over money. It’s hard to be a sincere heart-tugger when you are basically sexually harassing your own audience. Who knows? Attendees just might have cause for a class-action suit. 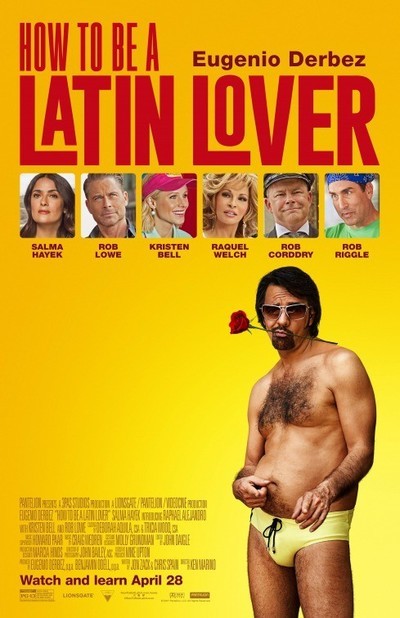 Rated PG-13 for crude humor, sexual references and gestures, and for brief nudity.

Anne McDaniels as Model in Advertisement