Addicted to the Movies: Patton Oswalt on "Silver Screen Fiend"

“People come into your cave with 200 year-old carpet, the guy tears your ticket in half, too late to turn back now… the stuff laid out on the candy counter. Then you come over here where it’s dark, could be anything in there, and you say, ‘Here I am, what have you got for me?”—John Goodman in Joe Dante’s “Matinee.”

He has written a book about it, “Silver Screen Fiend: Learning About Life From an Addiction to Film,” which is both a reflection on obsessive movie-going and a portrait of the artist as a young comedian.

As a self-described “addiction memoir,” “Silver Screen Fiend” is far less harrowing than most. Perhaps the book’s closest equivalent to hitting rock bottom may be a bender of “Plan Nine from Outer Space,” “I Married a Monster from Outer Space,” “The Tingler,” “Mr. Sardonicus” and “Daughter of Horror” that Oswalt binged on at Hollywood’s venerable Cinerama Dome on Nov. 1, 1997.

This date is noted in Oswalt’s film log that is included in the book’s Appendix and comprises four years of theatre hopping, beginning in 1995, when Oswalt was 26 years old, with a Billy Wilder double-feature of “Sunset Boulevard” and “Ace in the Hole” at the New Beverly Cinema (currently under the auspices of Quentin Tarantino) and ending with “Star Wars Episode 1: The Phantom Menace” at the Vista Theatre.

Those well-versed in Oswalt’s comedy may want to check the log for Dec. 24, 1996. Yes, there it is: “Jerry Maguire” at the Galaxy Cinema, the setting for one of his most indelibly funny stories about attending this Christmas Eve screening with his brother. Check it out in his stand-up special “Finest Hour.” He does not repeat it in the book. “I had done the bit,” he said in a phone interview with RogerEbert.com. “I didn’t want it to feel like I was recycling my standup for a book.”

The movies loom large in Oswalt’s life, career (he is one of the screen’s most welcome, and active, character actors) and comedy. “Phantom Menace” inspired his time travel fantasy “At Midnight I Will Kill George Lucas with a Shovel” on his second CD, “Werewolves and Lollipops.” “Finest Hour” also yields his monkey excrement-filled take on romantic comedies. His epic nearly nine-minute “Star Wars” filibuster on “Parks and Recreation” has received more than 3,253,000 views on YouTube. 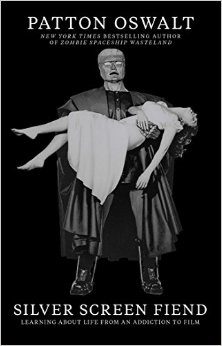 At a time when Oswalt was finding his voice and honing his craft on the standup stage, he haunted art houses and repertory theatres, bent on “seeing every movie I could,” he writes. Guided primarily by five sacred texts, “The Film Noir Encyclopedia” (a genre habit he picked up during his three years living in San Francisco, where he attended the Roxie Theatre’s annual noir festival), Daniel Peary’s “Cult Movies” trilogy and Michael Waldon’s “Psychotronic Encyclopedia of Films,” he became one of demented Norma Desmond’s “wonderful people in the dark.”

“I was looking back at what I was into and obsessed with before I became a father,” he said. “A lot of that went away with fatherhood, but (with this book) I wanted to kind of nod to the fact that that is where I came from and a lot of what I now put into my fathering and my husbanding and my being a more mature person came from a lot of years I was afraid I’d wasted inside a movie theatre. It turns out I didn’t. I wanted to give (those years) their due.”

The movies were not just a source of comedic inspiration for this canny and subversive observer of popular culture. He calls the New Beverly his $5 film school. “It was my delusion I was training to be a director,” he said. “Then all these other things reared themselves into my path. I was never thinking in terms of being an actor. It just sort of happened.”

Here, too, the movies offered an object lesson. In “Silver Screen Fiend,” Oswalt, recalls his screen debut in “Down Periscope” and taking inspiration from “lifer actors” such as Clint Howard in delivering his one line, “There’s a call for you, sir. Admiral Graham.”

The gateway film for Oswalt’s film addiction was the already the hard stuff, “Nosferatu,” seen at the tender age of five at a local library’s Halloween festivities. Oswalt briefly revisits this fateful encounter that he first wrote about in his 2011 bestselling memoir “Zombie Spaceship Wasteland.”

“This little square of light projected against a wall on an 8mm projector,” he said. “It just drew the whole room into it and terrified everybody. (I thought), ‘What is that, how does that work, I want to be a part of that.’”

Oswalt’s film log is prodigious and would itself make an impressive checklist for budding film geeks willing to follow Oswalt through the looking glass and down the rabbit hole. Prior to his immersion into cinephilia, he said, he had read such books as “Midnight Movies” by J. Hoberman and Jonathan Rosenbaum as well as Roger Ebert’s movie guides. “His ‘Great Movies’ essays were a big deal for me,” he said.

(It is a testament to Oswalt’s esteem for Ebert that in setting the scene for “Silver Screen Fiend,” he includes among four quotes about the movies, Ebert’s maxim, “No good movie is too long and no bad movie is short enough”). 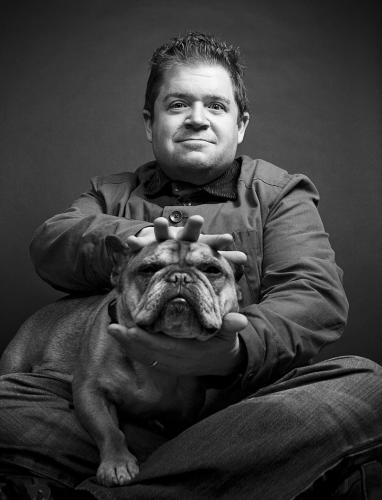 One of the book’s ancillary pleasures is Oswalt’s keen writing about directors, actors and specific films. When asked which classic film perhaps surprised him the most, he responded, “One that I figured I would either hate or it wouldn’t speak to me was Ingmar Bergman’s ‘The Seventh Seal.’ I figured I should see this movie because that’s what I should do, it’s a classic, and I was amazed at how genuinely funny and human it was. It really spoke to me more than I thought it would.

“Along the same lines, I guess I have to watch Francois Truffaut’s ‘Jules and Jim’ again. Man, that did not click with me for some reason. It was too cinematic, too aware of what it was doing. “

The New Beverly is one of several venues Oswalt cites in the book as among his “Night Cafes,” a reference to Vincent van Gogh’s masterpiece and which Oswalt describes as “the room you enter, and then having been there, forever changed.”

The majority of these for Oswalt were the comedy clubs that most shaped how he viewed standup and his place in it. The highest compliment I can pay “Silver Screen Fiend” is that as a stand-up memoir, it compares favorably with Steve Martin’s “Born Standing Up.”

”I wrote this book under the shadow of that book, knowing how good that one was,” Oswalt said. “I wanted to at least breathe the same air that it did. That’s the one that gives you the closest insight of the stand up’s mind and how a standup thinks. I’m just grateful that book exists.”

Just as Oswalt put in the Gladwellian hours in watching films over the course of those four years, so did he in his pre-comedian years put in the time listening and memorizing his parents’ comedy records and watching comedians onstage before going onstage himself.

His gateway comedy album, he figures, was Bill Cosby’s “Why Is There Air?” and a Jonathan Winters disc whose title he can’t recall. “Those were the first two comedy albums where when I was listening to them, I could see the pictures they were painting with the words and the different characters bouncing back and forth,” he said. “They were very, very visual, and that was amazing to me.”

The first comedian he saw live, he said, was perhaps George Carlin in the 1980s at the DAR Constitution Hall in Washington, D.C. (Oswalt launched his own career in 1988).  “At that point I had listened to all of his albums,” he said. “He was in that transition between the iconic comedian he was in the 70s and the angrier, older, wiser guy he became in the 90s. He hadn’t quite figured out how he was going to age gracefully and it was really cool to see that how he was wrestling with that. It’s a real dilemma for comedians. It was really fascinating to see that he was an artist and he was going through phases like any other artist.”

There was a time when an appearance on “The Tonight Show” with Johnny Carson could make a career. When Carson retired, Oswalt observed, “It was just about getting good and being prepared for whatever came. An HBO special was a big deal for us, but by that time there were many different options for how to bust through. We were the generation for which there wasn’t just one path.”

One path was the alternative comedy and music club Largo. “A good set could literally change the path of your life,” Oswalt writes. “I walked back into the kitchen one night and there was Paul Thomas Anderson, inviting me to be in ‘Magnolia.’ Another night, the Farrelly brothers came, and I started punching up their movies.”

But Oswalt writes vividly about the bad sets as well. One virtuoso passage is his stream of consciousness account of his 1992 debut at the Holy City Zoo in San Francisco. He went up imagining himself as Jack Nicholson’s Joker (“Wait’ll they get a load of me”). Less than five minutes later, he walked off the stage “like I had my shins shot off,” he writes.

“It came automatically,” he said of writing the passage. “I wanted to absolutely embrace what was going on in my thought process, how awful it was for me and that realization of, ‘You’ve gotta rethink everything that you thought you knew as a comedian.’ I thought I had this nailed and I was completely wrong.”

These days, Oswalt has emerged into the light. “Movies—the truly great ones (and sometimes the truly bad)—should be a drop in the overall fuel formula for your life,” he writes. He still counts himself as a “movie guy,” although he believes that TV now is “just as valid an art form.”

As an actor, he said, “I just like doing things that are interesting. It can be a web short as long as it’s well written. I’m not a snob to any one kind of medium.”