Florence Foster Jenkins, the socialite and notoriously terrible opera singer, would've undoubtedly been tickled to learn that her life story was destined to be tackled by not one but two high-profile films released 72 years after her death. Mere months after Xavier Giannoli’s César-winning “Marguerite” debuted in U.S. theaters, Stephen Frears presents his equally compelling yet decidedly more upbeat version of the tale. Frears’ delightful “Florence Foster Jenkins,” stars Meryl Streep in the title role, along with Hugh Grant as her husband and “Big Bang Theory” star Simon Helberg as her bewildered yet devoted pianist, Cosmé McMoon. It takes an especially talented performer to steal scenes from a formidable genius like Streep, and Helberg does it with seeming ease, bringing down the house multiple times with his dumbfounded facial expressions.

Helberg spoke with RogerEbert.com about the nature of camp and the challenge of performing badly, as well as his memories of working on the Coen Brothers’ 2009 film, “A Serious Man.” And for the record, when asked for his favorite (on-key) singing performance delivered by Meryl Streep in film history, he selected my favorite: her rousing rendition of “I’m Checkin’ Out” in Mike Nichols’ 1990 gem, “Postcards from the Edge.”

Of all the scenes you’ve acted in, the one I cherish the most is from “A Serious Man,” in which you play a junior rabbi who attempts to cheer up the film’s depressed protagonist by exclaiming, “Look at the parking lot, Larry!”

I love that scene too, and it’s only taken seven years for someone to actually ask me about it. It was just one five-page-long scene, but that film has resonated for a lot of people. It’s definitely one of the Coens’ more personal movies, and they are heroes of mine. They always seem to have scenes in their films that are one-offs and anomalies. They exist in the middle of the film, introducing a full character that you never see again. They do it in “Fargo” with the guy who has the awkward date with Frances McDormand where he says, “I’m so lonely.” Working with the Coens was a dream come true. The rhythm, the words, the life in that scene was so thrilling. After that film and “Florence Foster Jenkins,” my bucket list no longer exists.

What attracts you to playing such affable characters who strain to see the positive in everything?

As an actor, you always want to root for your characters. You sort of want to be their lawyer, and I had an acting teacher who would tell us not to judge our characters. There is definitely something affable about both of the characters you mentioned. They have no cynicism, and really have no judgment, either. They are slightly out of their element, or very much so, in the case of Cosmé. The junior rabbi is out of his league in some ways. He’s a little guy with a little office, and he’s trying to move up in the world. He doesn’t have the metaphors that those older rabbis have, so he’s got a parking lot to talk about. But he’s earnest. I thought a lot about Peter Sellers’ characters in “The Party” or “Being There.” Both Florence and Chauncey Gardner [in “Being There”] are sort of like accidental geniuses, and are linked by their innocence and purity. When Chauncey talks about gardening and recites lines from commercials, people believe they are hearing deeply profound insight. Perception is really all that these films are about. I love getting to play these aliens that are sort of plopped into the action and must grab the bull by the horns, despite having no ability or no awareness of how they’re coming across.

I was reminded of the “so-bad-they’re-good” movies of Ed Wood and more recently, Tommy Wiseau, whose 2003 film, “The Room” still draws large crowds at midnight screenings. Wood and Wiseau’s films are truly enjoyable because their work comes from a genuine place.

Exactly, there’s no irony. There’s a Susan Sontag essay, “On Camp,” in which she writes that in order to achieve pure camp, you can’t even be aware of it. If something is so bad it’s good, it has to be aiming for the stars. It can’t be winking at the audience or falling short intentionally. You have to fail passionately but earnestly, and that’s how it becomes camp. I had friends who went to see “The Room” in L.A., and Tommy was sitting in the back, listening to the audience. There’s the scene where he does his James Dean impression with the line, “You’re tearing me apart!”, and the audience was hysterical. It made me wonder what the process is in Tommy’s mind, and how he comprehends that sort of reaction. Perhaps there is something beautifully simple about it. The audience is having a good time, so the work must be a success. Every time we do anything artistic, the way it’s perceived is always going to be different from the way that we had intended it to be because it’s subjective. Maybe the Tommys and Florences of the world are happier people than the rest of us.

How did you approach the physicality of this character, who must continuously repress the agonized laughter threatening to erupt at any moment?

Cosmé is sort of the opposite of the rabbi in “A Serious Man.” In that film, I gave a monologue in order to win over Larry. I was trying to put him on a righteous path by preaching to him. There’s not any of that in this film. I’ve learned over time that human beings tend to want to do more than they have the courage to do, or that the social contract will allow them to do. I just watched Meryl and listened to her and I understood where Cosmé was coming from. We were performing the music live while we were shooting, so there was so much to focus on that it took the attention off of me. I didn’t have to think about what my face was doing. There’s something nice about being able to have less resources at your disposal to get what you want. All I had was the music and my body, and with film, you have the benefit of having the audience come close to you, where they can see and infer more than they would onstage. 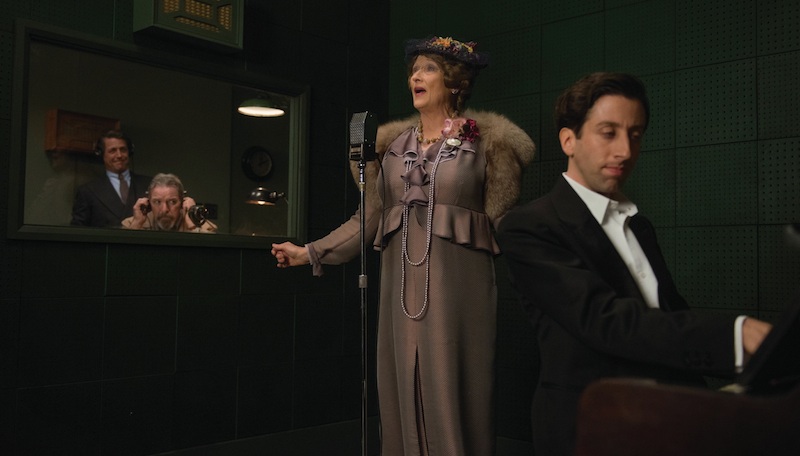 How did you go about making the musical sequences work on film?

Meryl is so stunningly impressive in every possible way. She’s just brilliant, and there are times she will cut herself short, which I will never be able to understand. In this film, she sings opera in four or five languages. You have to know where the right notes are to know where the wrong notes are. Her process was similar to mine in that we had to learn how to perform the music well first. Meryl actually could sing these songs pretty damn well, which is insane, since they are the hardest pieces of opera in the canon. She learned them well and I learned my side well, and then we tried to play them well together. After that, we let it fall apart as organically as we could. It was sort of like in a physical comedy when you have to trip and fall. It’s a hard thing to do because you have to surprise yourself every time. Otherwise it will look fake. That might be why singing badly or performing badly is so difficult. You can’t try to be bad, you just have to let it happen. It’s a very weird thing.

What was your research process like regarding the real Cosmé McMoon?

I do have a musical background, but not in classical or opera or anything like that, so I had to do a lot of research. I had to get incredibly familiar with the pieces by listening to them, and then taking a handful of lessons for a crash course in classical technique. I read about the New York music scene in the ’40s and I read a Cole Porter biography in order to further immerse myself in that world. I wanted to know what these guys looked like when they played—their posture, their bodies, their hands—just so I could at least fake being a classically trained pianist. My understanding of Cosmé mostly came from the script, along with a few little facts about him that weren’t in there. I played the character as I saw him, and I’m not sure how identical it was to what [screenwriter] Nick Martin had envisioned. But when a script is that good, the little moments end up saying a great deal, such as the weightlifting scene or the moment when a guy puts his arm around Cosmé. When Cosmé says, “Corbin’s friend seems so personable,” you think, ‘Well, maybe Cosmé doesn’t realize that he’s gay. How truly aware is he of what’s going on?’

After having co-directed 2014’s “We’ll Never Have Paris,” is filmmaking still among your pursuits?

Not quite. I feel like I’d have to be called again—I don’t mean literally [laughs]. I’d have to feel the need to tell a story from that point of view, which is the reason I did that movie. I directed it with my wife, Jocelyn Towne, but I also wrote it and I ultimately did too many things. It was very hard, though I am proud of the film. It came about because I wanted to act in something where I could play a version of myself that people wouldn’t be as familiar with. I was inspired by the flawed characters in films like “Modern Romance,” “Sideways,” and obviously “Annie Hall,” which are all movies that I like. You learn a lot as an actor by stepping onto the other side, though when you work with Stephen Frears and the Coen Brothers, you think, “I really have no place directing” [laughs]. In fact, Kathleen Chopin, who cast “We’ll Never Have Paris,” is honestly the sole reason why I ended up in “Florence Foster Jenkins.” I was on her mind, so if for nothing else, work really does beget work.