As the state of Israel is born, a mother perishes. And her doted-upon son grows up to share the story of both events with the world.

Such is the plot in brief of the capable but overly earnest “A Tale of Love and Darkness,” Natalie Portman’s directing and screenwriting debut based on Amos Oz’s 2002 memoir. This eight-year labor of love is an especially meaningful one since the “Black Swan” actress was born in Jerusalem, and has relatives who are immigrants and holds both U.S. and Israeli citizenship.

Perhaps it’s fortuitous that the film took eights years to arrive, partly due to her insistence that the dialogue would be spoken in Hebrew along with her efforts to find funding. Not only did she win an acting Oscar in the meantime, she married and gave birth to a young son—not bad preparation to play Oz’s mother onscreen.

Portman’s passion pours forth both as a capable director but also as Fania, the once-privileged daughter of a Jewish European family forced to flee to Palestine after the Holocaust in the ‘40s and reduced to living in a lower-class Jerusalem suburb in a dutiful marriage to Arieh (Gilad Kehana), a failed scholar with a bookish countenance.

While she has gathered a capable cast, the movie suffers whenever the regal Portman is not front and center. As her 10-year-old only child, Amir Tessler’s watchful eyes are his best features. Otherwise, he mainly reacts to the shifting and increasingly tense circumstances around him instead of rightfully being the focus.

His standout scene involves an encounter with a pretty Arab girl at a gathering. Trying to impress her, he says, “There is room for two peoples in this land.” But any hope of lasting friendship is dashed when his Tarzan-like antics while climbing a tree end up injuring her toddler brother below. Metaphor, anyone?

I was surprised to read that Oz’s book apparently has abundant humor for there are few openings for laughs in the movie, not even when Fania’s nasty mother-in-law berates her attempt at making borscht. Not helping matters is having it revealed very early on by an elderly Amos, overheard as a narrator, that she died at age 38. As a result, it is hard not to anticipate her sad demise as she grows increasingly depressed and begins experiencing debilitating headaches.

As far as a history of the founding of Israel, those with only a passing knowledge of the historical events involved will be left with the sketchiest of details other than the constant threat of violence and retaliation in the region that continues to this day.

Oz’s words are filled with poetry and parables, and Portman the filmmaker tries to capture that sense visually with varying color palates to denote when the action takes place the dreamy past, the dreary present or in the characters’ vivid imaginations as Fania and Amos invent stories together.  But the overall florid effect of the words and shifts in color tend to be distancing rather than pull us in.

That said, I applaud how, just like countless male actors, Portman was able to leverage her clout to join the club of the too-few actresses—including Angelina Jolie, Sarah Polley and Jodie Foster–who have been granted their wish to direct. Still, the image that remains with me is one of Fania, nearing her end, framed by a rain-splattered window and the older Amos staring at her from the other side. But, as beautiful as it is, that moment encapsulates the barrier that keeps us from being as emotionally invested in Oz’s journey as Portman. 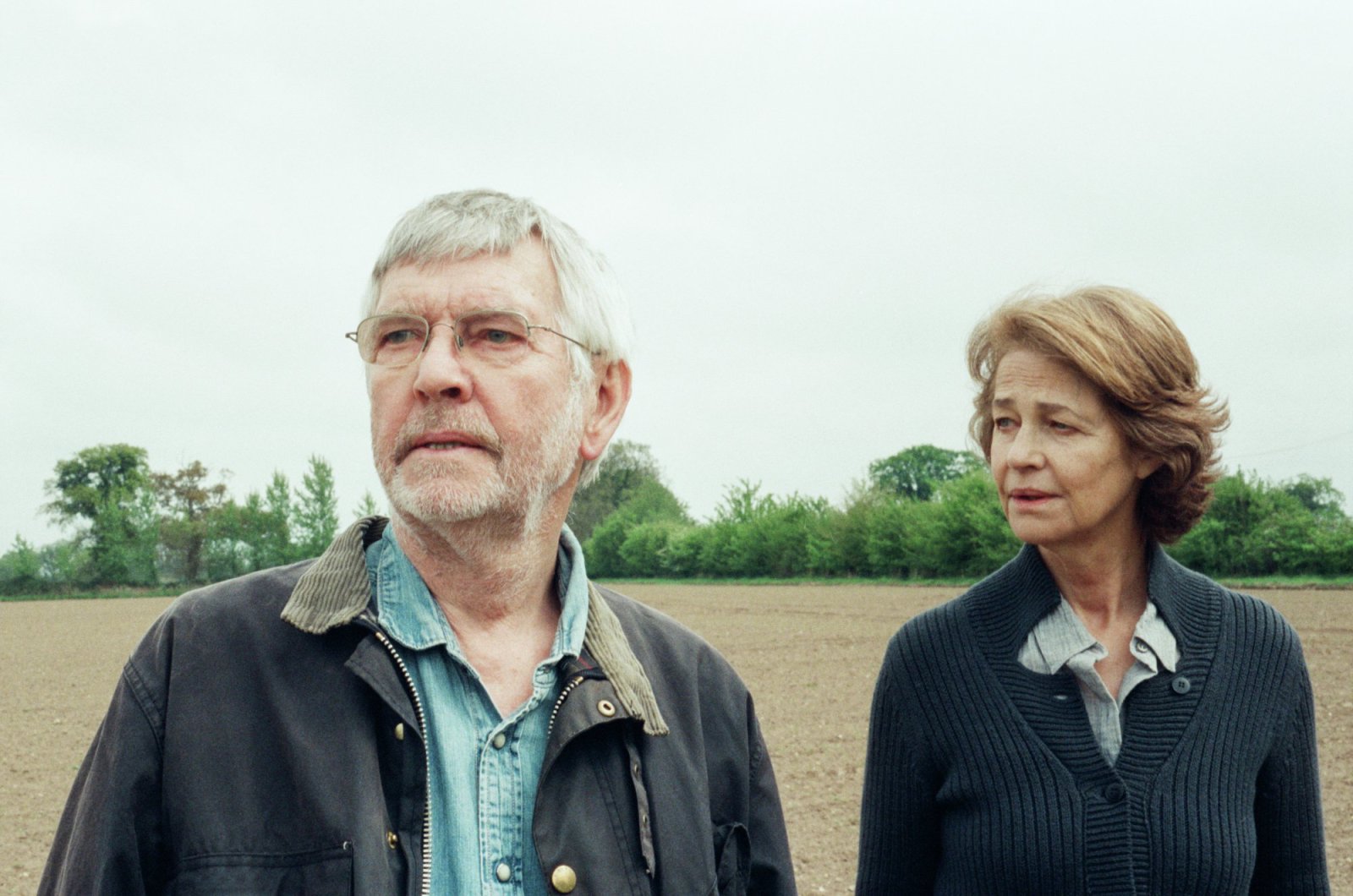 Anyone with a fondness for those great British actors of a certain age who invaded U.S. theater screens in the ‘60s – and that would certainly include me – probably gives a little cheer whenever the likes of Terence Stamp, Julie Christie, Albert Finney, Vanessa Redgrave, Maggie Smith and Michael Caine appear in a film. Too many have already left us too soon, including Alan Bates, Oliver Reed and Peter O’Toole.

The over-flowing crowd that packed the press screening on the festival’s opening day was testament enough that these gods of cinema are still hold sway over those who were tutored about the power of movies through their performances.

It might not have mattered if “45 Years” were simply a delightful trifle like “Quartet” or a shameless heart-breaker like “Unfinished Song,” both part of the current wave of senior-aimed titles that have made their way to TIFF previously. Just to witness Charlotte Rampling, the predecessor of all mean girls to come who both frightened and fascinated me as a youngster when I first saw her as Lynn Redgrave’s cruelly selfish roommate in “Georgie Girl,” and Tom Courtenay, whose unforgettable film debut in “The Loneliness of a Long Distance Runner” seemed to air every other day on the Canadian TV stations I used to watch while growing up in Buffalo, would be a rare privilege whatever the movie’s quality.

However, it is something to be cherished that what is basically a two-hander of a drama about how an unresolved situation from the past can come back and upend the present turns out to be quite devastatingly sublime. And not just because of how its stars are so skilled they make you almost forget they are acting. But also in the way director-writer Andrew Haigh takes the ordinary circumstances of a long-wed childless couple who are settled into their semi-rural English routine—take-charge Kate, a retired teacher, and laid-back Geoff, who has been slowed by bypass surgery—and initially opens the door just a mere crack to allow the sudden arrival of a piece of news to seep into their existence in an insidious manner. Little by little, this ghost suddenly begins to overwhelm what they thought was their life together.

It is better not to fully reveal too much about what the revelation is, so delicious is the ability of Rampling, still a stunner wrinkles and all at 69, and Courtenay, 78, who always was able to convey so much without barely saying a word, to exhibit signs of this increasingly threatening emotional disruption that builds inside with their faces and body language. Let’s just say it arrives in a form of a letter that concerns the discovery in the German Alps of a body of a former love of Tom’s before he and Kate met. They both attempt to go about their daily business, with she continuing arrange their wedding anniversary party and he dealing with a broken toilet.

But Tom begins to allow a sudden rush of memories to consume him, even resuming his old smoking habits, and while Kate struggles to proceed with their celebration plans as if nothing has happened. Every moment or action soon becomes fraught, looking at watches as a gift for her husband as if to remind him to focus on the here and now. Or choosing the era-appropriate songs for the party DJ to play—let’s just say that “Smoke Gets in Your Eyes” by The Platters is quite apt.

Ultimately, “45 Years” turns out to be a more upper-middle-class variation of those kitchen-sink dramas of yore and that is an exceptional thing to behold. 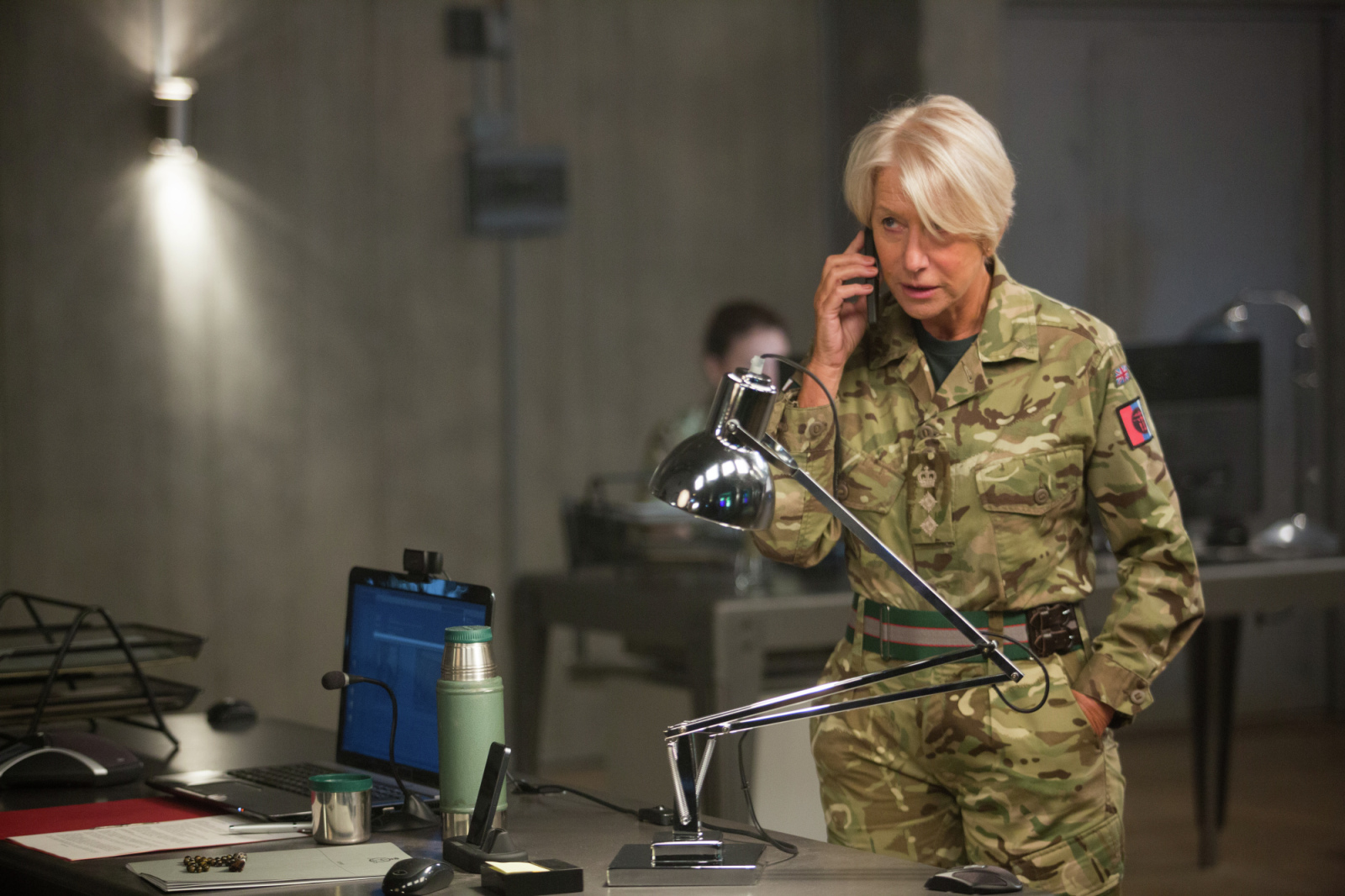 I guess I shouldn’t be surprised that Dame Helen Mirren can even make camo fatigues look sexy as her British colonel sternly reigns over “Eye in the Sky” as surely as her Elizabeth II presided over “The Queen.” She is long past losing her action genre virginity after starring in TV’s “Prime Suspect” and in those gun-toting “RED” films and looks quite stylishly in her element.

But South African director and actor Gavin Hood’s thriller about the implications of unmanned military drones used in the war on terror manages to be primo popcorn fare as well as a thoughtful rendering of the moral implications of bombing a target from thousands of miles away. A nail-biter with a brain, in other words.

Hood makes up for the stumble he took with "Rendition," the follow-up to the Oscar-winning "Tsotsi" from 2005, with this ripping yarn that doubles as a cautionary tale. He wastes little time in deftly introducing the worldwide network of characters and putting them in their places behind monitors, mostly so they can provide drone surveillance of a fateful meeting between members of the terrorism group al-Shabaab who sit high on the most-wanted list after bombing a Nairobi shopping mall.

Besides Mirren in an Army base in England, there is Alan Rickman’s lieutenant sitting amongst several high-ranking British politicians, Aaron Paul’s baby-faced drone pilot near Las Vegas, another team member in Hawaii who IDs the targets and a specialist in legalities who dogs Mirren as she makes split-second decisions.

Most valuable, however, is Barkhad Abdi, the Oscar-nominated Somali actor from 2013’s “Captain Phillips” whose character is on the ground in a Kenyan suburb and is the only one physically present where the events are actually unfolding.

When the drone images reveal that the terrorists are preparing for an immediate suicide strike, the mission suddenly switches into attack mode. But before any action can be taken, several levels of officialdom must be consulted – especially when collateral damage in the possible form of innocent lives becomes an issue.

While there is little that is inherently dramatic in heated debates that pit necessity against human lives, Hood does an excellent job in finding ways to ramp up the tension without resorting to the usual mindless blockbuster tricks. Most wisely, he uses the drones themselves—besides an hovering aircraft, there is a birdlike creature and a cicada-like critter that flutter about looking like mythical beings that belong in a “Clash of the Titans” sequel—to relieve any sense of stasis.

The payoff to this new-fangled tick-tock is both emotional and thought-provoking. How many action thrillers these days achieve that, and have a kick-ass dame to boot?