Hollywood is increasingly trafficking in a niche genre that has provenincredibly durable, especially given the ever-bulging demographic of aging Boomers. Let's call it "Cocoon" cinema — in honor Ron Howard's 1985 fountain-of-youth fairy tale. While "On Golden Pond" came before and "Grumpy Old Men" would follow, "Cocoon" pretty much defined the recipe that still holds today. Gather a pair or an ensemble of well-regarded oldsters who resonate across generations. Make sure one character will blissfully undergo a life-altering event, while another will crankily cling to ancient habits until the tearful finale. Make sure to blend in plenty of spicy antics and sexual wink-winks — hanky-panky humor is to the over-50 crowd what bathroom jokes are to grade-schoolers, don't you know. They provide the necessary leavening to offset the impending senior moments of sentimental heartbreak, debilitating disease and, naturally, death.

Of course, not every film that focuses on the lifestyles of the retired yet feisty needs to be "Amour." Nor should they, given that few viewers have fully recovered from the galvanizing effects of what essentially was an Oscar-nominated horror movie about the ravages of age. But the trouble with this style of big-screen comfort food, as tasty as it can be when served with the sort of easy-breezy panache shown in "The Best Exotic Marigold Hotel" and "Quartet," is that such predictable ingredients get stale all too quickly.

That, alas, is often the case with "Unfinished Song" (formerly known as "Song for Marion"), a kind of assisted-living "Glee" (and, perhaps, influenced by the documentary "Young@Heart" as well as other chin-up U.K.-based fare such as "The Full Monty") that concerns an amateur choir of British pensioners whose supposedly hip-and-happening repertoire is almost as out of date as their stuck-in-the-'70s hairdos and wardrobes.

Has anyone who has been around for the past several decades not heard of a dance called the Robot? Is Salt-N- Pepa's "Let's Talk About Sex" still considered racy? Is it shocking for adults in their dotage to strike heavy-metal poses and flash devil horns while performing Motorhead's "Ace of Spades" while donning ratty hair-band wigs? The only one who seems to think so is Gemma Arterton ("Hansel & Gretel: Witch Hunters") as Elizabeth, the comely and ceaselessly cheery young music director whose unexplained lack of dating skills leaves her with unlimited hours to devote to her flock of silver-haired songbirds.

But, as is the case with most "Cocoon" cinema, the genius is usually found in the casting choices, and it is here that "Unfinished Song" provides something to trill about—namely the central couple who movingly dominate the story. Whoever thought of recruiting Vanessa Redgrave as Marion, cursed with a sentence of terminal cancer who discovers joy, solace and companionship as a member of a community choir, should be handsomely rewarded.

With the knowledge that her days on earth are quickly winding down, Marion summons the courage to perform a solo. And if there exists any more emotionally fulfilling scene in a movie this year than a radiant 76-year-old Redgrave, knit cap atop shorn head and eyes a-sparkling, pouring her entire being into Cyndi Lauper's "True Colors," it would be hard to believe. The wise will have tissues at the ready.

That Marion is dedicating her efforts to Arthur, her disagreeably gruff spouse who sneers at her participation in the group and fears it will worsen her health — therefore, snatching her away from him all the quicker -- makes her rendition even more touching.

Somehow, Terence Stamp — his once cruel-yet-beautiful face, so haunting in the 1967 classic "Far From the Madding Crowd," turned gaunt, creased and sunken while his granite-blue eyes remain as fatally piercing as ever at 74 — matches if not exceeds Redgrave's contributions as Arthur. Too bad director-writer Paul Andrew Williams seems oddly determined to compromise his character's dignity onscreen with needless waffling before he fully commits to joining the choir and taking his late wife's place in a regional contest.

But as anyone who has seen Stamp hold the screen hostage in "The Limey" or take command as the original (and best) General Zod in 1980's "Superman 2" knows, this is an actor who never leaves anything but a lasting impression. Playing a man whose insecurity, sorrow and pain threatens to turn him into an angry loner left adrift by the loss of his one true love, Stamp — too often stuck with being a supporting villain these days — manages to soar above the script's weaknesses at every turn. Few others could turn the act of simply staring off into space while puffing on a hand-rolled cigarette into an eloquent portrait of silent struggle.

Meanwhile, a quietly poignant performance by Chris Eccleston as the couple's estranged son, who is saddled with one of those precocious ray-of-sunshine daughters who only exist in film, suffers from a lack of back story to fully explain the subsequent fury he harbors against his father.

But at least audiences who hang in there will be rewarded with Arthur in concert doing a gravelly yet stirring version of Billy Joel's "Lullabye (Goodnight, My Angel)". It's one of the rare instances when "Unfinished Song" achieves a heavenly state. 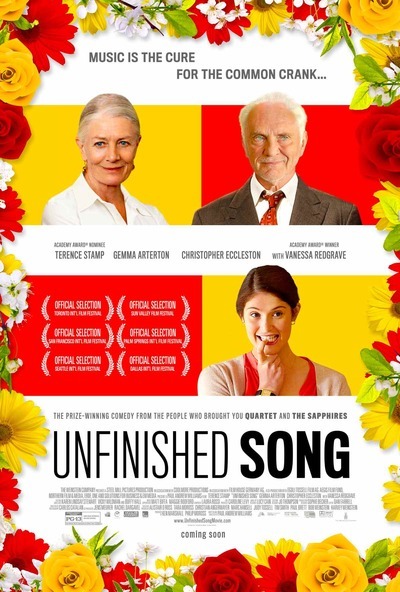