TIFF 2014: Traveling in a Darkened Theater

A good film festival reaches its fingers across the globe for its program, picking up films from different cultures, viewpoints and even continents. When I realized that my schedule would allow the journey, I made it a point to schedule my first two days at TIFF with a globetrotting dynamic: my first eight films came from eight different countries, from common film fest sites like the U.K. and France to lesser-known film centers like New Zealand. Now, the weird thing about festivals is I can’t write about them all yet (they prefer press screening responses be held until public premieres), but even the films I can discuss have a remarkable range of cinematic languages. Their unveiling over the first two days of this year’s Toronto International Film Festival is like a refreshing splash of cold water to a cinema audience tired of the same heated Summer blockbusters.

Susan has said a few kind things about “The Judge” (comparatively to most year’s fest openers), the most “high profile” film so far and she’ll soon be reporting on tonight’s premiere of “St. Vincent.” I took the other end of town on Friday night and saw the world premiere of Dan Gilroy’s “Nightcrawler,” easily the best of the first wave of major TIFF titles, and another statement of artistic power from the increasingly phenomenal Jake Gyllenhaal. Following on the heels of solid work in “Prisoners” and “Enemy,” Gyllenhaal pushes himself even further as the unforgettable Lou Bloom, a sociopath with a pretty solid business plan who taps into a vein of darkness in Los Angeles that proves a profitable one.

Lou is a petty thief, the kind of guy who mugs security guards and sells stolen wire fences. He stumbles upon a career that fits his worldview of anything for advancement when he drives up on a car accident moments after it happened. He watches as a stringer, a freelance cameraman played by Bill Paxton, shoots the flaming wreckage and hears him sell it to the local news. Lou hocks a bike to get his own camera rig and a police scanner, and starts searching for lead stories. He becomes the MVP for the news director (Rene Russo) of the lowest-rated broadcast in town, somehow finding a way to get the footage that no one else can get. What’s the way? A complete lack of moral boundaries. Early in “Nightcrawler,” he sneaks into a home after a shooting to get footage from the inside out instead of on the street with his competitors. That’s just the beginning. Before long, Lou is an active participant in the crime he's chronicling.

“Nightcrawler” is an L.A. story through and through. Writer Dan Gilroy makes his directorial debut and proves more than capable at pacing a gritty thriller like this one, but hiring cinematographer Robert Elswit as his D.P. may have been his smartest decision. Los Angeles hasn’t been this vital of a setting since “Drive,” as Lou’s story is lit by the night lights of the City of Angels—street, head, and dashboard. "Nightcrawler” hums, pulses and vibrates with the night life of a city where getting attention has become more essential than getting ahead. Well, they’ve become one and the same.

Gyllenhaal is a wide-eyed, fascinating wonder here, easily giving one of the best performances of the year. Lou is the kind of terrifying sociopath who too often makes sense to completely dismiss. He's crazy but he's disturbingly successful at the same time. Bloom taps into a different kind of insanity when his lack of a moral code combines with Russo’s desperation (although I wish her character was more of a narrative equal to his; one of the film’s few flaws). Gyllenhaal never goes “Full Bickle,” keeping Lou grounded in a way that we believe him, an essential element of a film that gets this intense. Lou Bloom is a product of our news era, what has been spawned from a desire to get the story first, get the most blood in the footage and push the envelope of what’s right and what’s wrong. Nothing is wrong for Lou Bloom, other than failure. 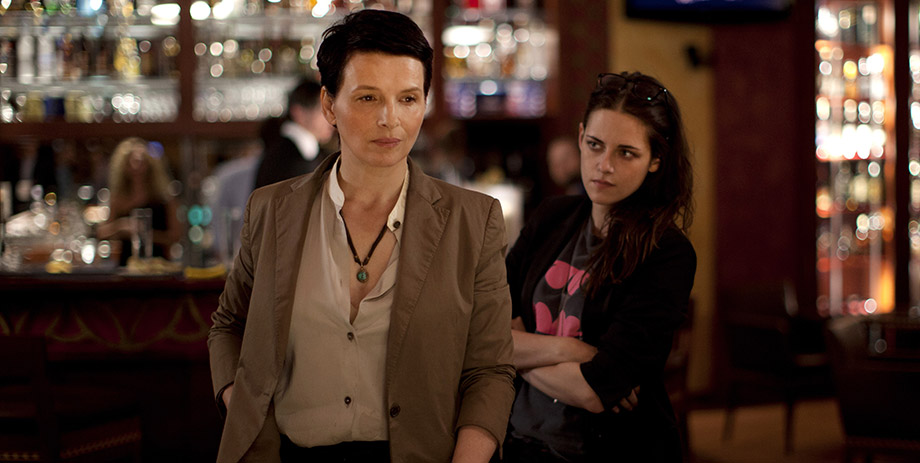 TIFF also serves as a catch-up festival for those who didn’t make it to Cannes, and day one saw press and public screenings of some of this year’s most talked-about films from the Croisette, including “Winter Sleep,” “Mr. Turner,” “Mommy,” “Two Days, One Night” and Olivier Assayas’ “Clouds of Sils Maria,” starring Juliette Binoche, Kristen Stewart and Chloe Grace Moretz. Binoche engages in a bit of meta self-reflection as a world-famous actress named Maria Enders, accompanied by a supportive but also willing-to-challenge personal assistant named Val (Stewart, doing career-best work) on a journey to the mountains of Sils Maria to honor a former director of hers named Wilhelm Melchior. When the reclusive writer/director ends up dead before the ceremony, it sends Maria on a journey of self-discovery. The emotion inherent in the loss of someone who gave her a career with a legendary play named “Maloja Snake” (about a cloud formation in the mountains of Sils Maria) pushes Maria into a planned restaging of the piece. In the original production, Maria rose to fame as Sigrid, the young upstart caught in a mind game by Helena, an older woman arguably challenged by this year’s model. In the new production, Maria will play Helena, and a famous action/tabloid star (maybe modeled a bit on Lindsay Lohan) named Jo-Ann Ellis (Chloe Grace Moretz) will play the other part.

Preparation for the new production of “Maloja Snake” leads to several scenes of line reading between Maria and Val and the lines between the in-film play and the characters blur. Maria used to be Sigrid, Val sort of is Sigrid, and Jo-Ann is about to be Sigrid. As a writer, Assayas digs deep into the subtext of a celebrity culture that puts an expiration date on its female stars and values youth above all else. Consequently, much of “Cloud of Sils Maria” sounds remarkably, and intentionally, self-aware. Conversations between Maria and Val have a purposeful theatrical quotient, allowing them to blur with the more character-driven scenes and create, well, a cloudy sense of reality. While there are moments that work, too much of the commentary on celebrity culture feels forced (especially when Moretz’s paper-thin character comes into play) and the overwritten aspects of the script push up against the more honest work by Binoche and Stewart. They’re both phenomenal here, but I found myself trying to unpack what “Clouds of Sils Maria” was trying to say more often than enjoying it. It never breathes because it’s too busy “saying something.” 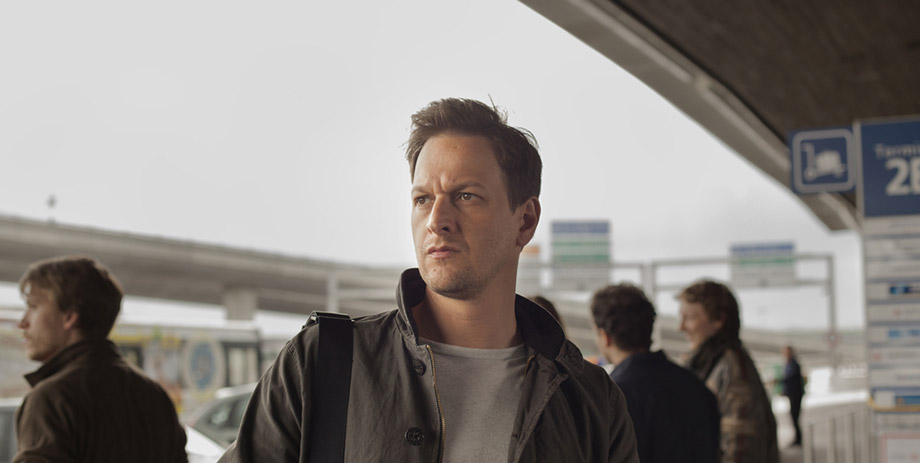 A similar undercurrent of forced cultural commentary hurts another Cannes transplant, “Bird People,” but to a greater degree. Pascale Ferran’s film starts off promisingly, and features a dual story structure that allows for some nifty analysis, but it’s a frustrating film, a movie that can’t find its rhythm. Gary (Josh Charles) is a modern business traveler, the kind of guy who lives out of suitcases and amasses frequent flier miles with alarming frequency. On a trip to Paris, from which he is supposed to jump to Dubai, he has a panic attack in the middle of the night. He wakes up the next morning, and disconnects. He quits his job, leaves his wife & kids, and turns off his phone. He’s not going home; he’s not going to his next business meeting; he’s not going anywhere. Of course, this takes a bit of work, including a heartbreaking scene with his wife (Radha Mitchell) via Skype and a few confused conversations with work colleagues. But he won’t be dissuaded.

In what turns out to be a frustrating split of the film, the second half tells the story of Audrey (Anais Demoustier), a woman who is jumping into fantasy just as Gary is jumping into the immediate reality of his surroundings. If he’s grounding himself, she’s taking off. I won’t spoil anything, but the title may give a few things away. Ferran has made two films—a character-driven piece about a man who flies becoming earthbound and a fantasy piece about a woman who is earthbound becoming airborne. Neither work. The aforementioned Skype scene is incredibly long, which allows for realism but not entertaining filmmaking. There are scenes in the second half that go on way too long as well as Ferran gets lost in her storytelling. “Bird People” is an experiment that could have registered at, no exaggeration, half the running time, but doesn’t have enough to say to justify its current length. 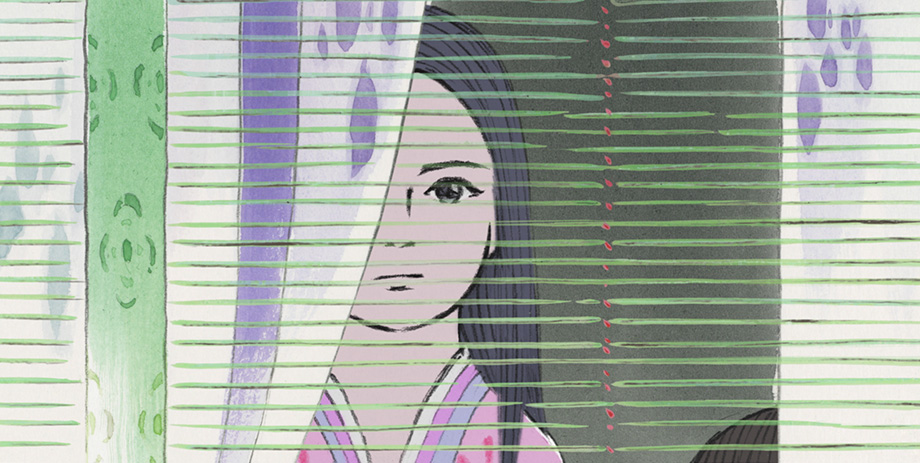 On the other hand, Isao Takahata’s “The Tale of Princess Kaguya” has an epic running time that doesn’t impact it nearly as dramatically. The director of a film Roger loved, “Grave of the Fireflies” (and I’m trying hard to see films at this year’s fest from directors that Roger admired), Takahata introduced his film on Friday afternoon to rapturous applause after traveling from Tokyo to the lovely Winter Garden Theatre. The cult of Studio Ghibli grows every day (deservedly so), and the reception for “Kaguya” was warm, emotional and resonant in Toronto.

Based on one of the oldest stories in Japanese culture, “Kaguya” is the tale of a bamboo cutter who finds a miniature princess as he’s going about his daily grind. He takes her home, where she turns into a baby, then a toddler, then a girl, and so on. Not immediately but not in the natural order of things. Before he knows it, the bamboo cutter’s princess has grown up, and he must find her a suitor, but who could be worthy of this princess given to him literally by God?

It’s not hard to see the parallels between this fable and the reality of parenting. Kaguya goes through the standard routines of human life in fast forward—playing with other kids, experiencing young love, moving away from home, being forced to find a mate. Ultimately, Kaguya rebels against the structure of the human condition, refusing to be another belonging for a male noble, and longing for her days back in the bamboo fields.

Takahata’s film is visually sumptuous while also being remarkably simple. Most of the brush strokes take on the appearance of a watercolor painting, often incomplete with plain white backgrounds where fans of Hayao Miyazaki’s work will expect detailed worlds. My favorite moments in “Kaguya” are actually the least visually distinct—usually while the heroine is running—as hair blows, robes fly, and the film really takes off. 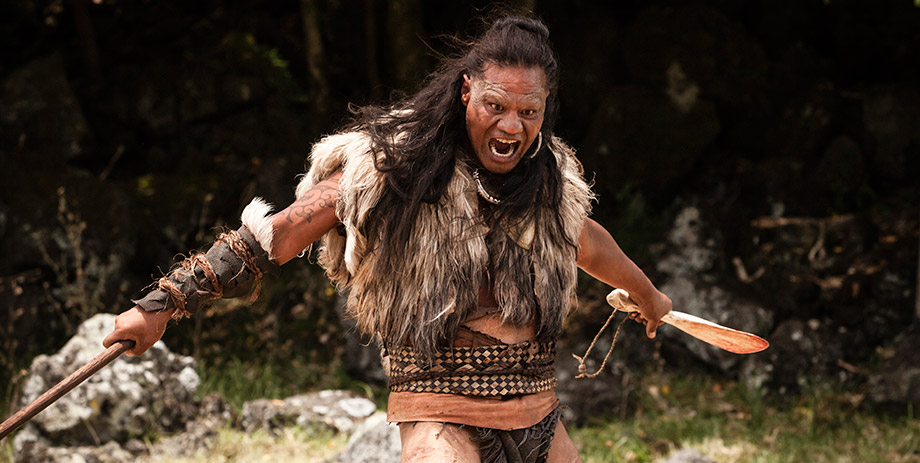 Finally, I wish I could say that Toa Fraser's “The Dead Lands” took off. After deciding to make my opening night premiere a bit off the beaten path with this Maori tale of a young man forced into a violent journey when his village is slaughtered, I was excited by the atmosphere of a TIFF premiere. Maori musicians performed before the screening and acknowledgements to the many cast and crew members there were given in their native tongue. And the cultural intrigue of a world this different from Toronto and my own carried me through the first ten to fifteen minutes. Then “The Dead Lands” lost its way. It’s a repetitive, predictable story that’s not visually strong enough to register. And in a festival with as many destinations as this one, the worst thing you can be is forgettable.

Next: “The Duke of Burgundy,” “The Vanished Elephant,” and “Welcome to Me”