The Midnight Madness program at TIFF 2014 has not exactly set the horror world on fire. Sure, there are plenty of people talking about “It Follows,” one of the more buzzed films of the fest in general, and Kevin Smith’s “Tusk” divided audiences after its premiere, but there hasn’t been a real breakout film like this horror nut hoped there would be. Arguably the best TIFF 2014 Midnight Madness was arguably the best Sundance midnight offering, Adam Wingard’s “The Guest.”

What I’ve seen of horror at TIFF 2014 has been largely disappointing, highlighted by a quasi-horror film that didn’t even play in the Midnight Madness program. In fact, I would argue that another drama, a recent winner at the Venice Film Festival, qualifies more completely as horror than most of the MM films this year. Again, I really wish I had seen “It Follows,” which proved to be my White Whale of TIFF 2014—a film I tried to see multiple times but never got to experience. Because what I did see didn’t impress.

The best horror film of the six I saw this year in Toronto, by far, is Justin Benson & Aaron Moorhead’s “Spring,” a hybrid of Richard Linklater and H.P. Lovecraft. Lou Taylor Pucci does the best work of his career as Evan, a grieving, angry young man who becomes so detached from life that he realizes he needs to physically escape as well, backpacking through Italy. Evan first meets a bunch of other tourists, and does the traditional train-and-hostel thing that many of us did after college. One star-kissed night in a gorgeous Southern Italian town, Evan spots Louise (Nadia Hilker) across the plaza. She offers to go home with him instantly, but Evan isn’t “that guy.” He senses he wants something more with this beauty. But he has no idea what he’s getting into.

Much of “Spring” plays like “Before Sunrise” as Evan and Louise flirt their way through Italy. Until she transforms into…something. Imagine if Julie Delpy’s character in the Linklater movies held a primordial, deadly secret. Not to spoil anything, but Louise’s secret is not what you expect it to be or easily defined. It’s not a “Twilight” variation or “An Italian Werewolf in Naples.” It’s something else entirely. And it adds a ticking clock element to “Spring” that’s remarkably clever, in that Evan will eventually learn about his new partner’s secret, but given how little else he has to hold on to in life, he may not care.

“Spring” is an ambitious work and really sticks the landing, with a phenomenal final scene. It also features great work from its two leads, and some really remarkable creature feature dynamics without overplaying those elements. We’ll often hear what’s happening to Louise more than we’ll see it and visual effects are used sparingly but effectively. I wish the film didn’t sometimes get weighed down with its own concept—there’s a lot of dialogue explaining exactly Louise’s past and future—and it could have been more visually poetic but this is an ambitious horror-drama, and ambition is what was clearly lacking from the genre pics I saw this year at TIFF. 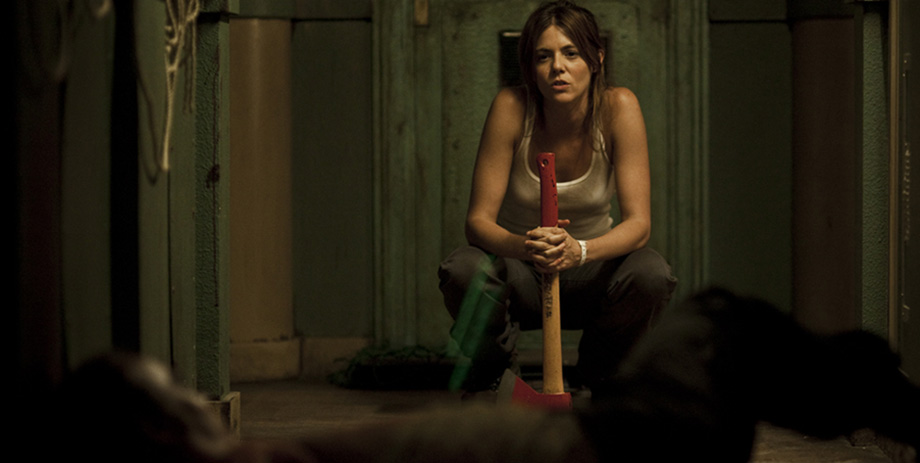 There’s certainly not an ounce of ambition in the dismal “[REC] 4: Apocalypse.” I was surprised by the effective “[REC] 3” and eager to see where the clearly-talented Jamie Belaguero would take the series next. The latest entry in this franchise returns to where it began, focusing on the story of Angela Vidal (Manuela Velasco), the reporter with the worst possible assignment on the night the zombie apocalypse began. Remember the brilliant and terrifying end of “[REC]”? This one picks up RIGHT there, as soldiers storm the apartment complex, saving Angela. Before she knows it, Angela is on an ocean freighter, kept as a prisoner in the middle of nowhere, and used as a lab monkey to stop the impending end of the world.

Of course, the freighter becomes ground zero for the next wave of neck-biting action. Sadly, “[REC] 4” doesn’t show anywhere near the creativity or genre imagination of the best of this series. It is by far the worst entry in it, an uninspired example of horror filmmaking at its most generic. We’ve seen it ALL before. Well, except for maybe a last-act bit with a bunch of zombie monkeys, but, by then, it’s WAY too late. 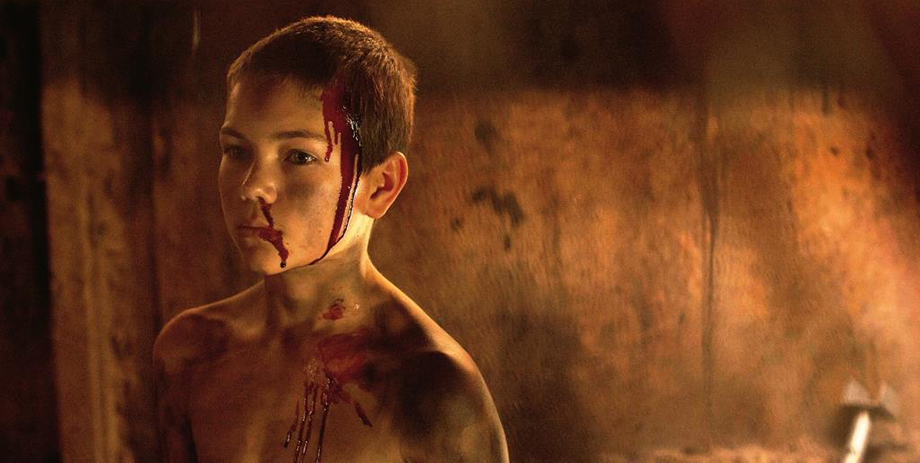 “[REC] 4” feels like a failure from conception, but “Cub” takes an interesting idea and wastes it. There’s a better movie here with a serious rewrite and more visual personality. As is, it’s a miss, a film that I wanted to like, but couldn’t get past its narrative disappointments.

Twelve-year-old Sam (Maurice Luijten) is a troubled kid, trying to find a bit of order and life advice on a Cub Scout camping trip, even if the counselors mock him and the other kids don’t exactly befriend him. Sam is the only one who senses that tales of the monster Kai in the woods around them are more than urban legend, finding a treehouse home for a woodland, feral child who may be the reason locals have been going missing. The mask-wearing youngster in the woods hides an even darker series of traps, designed to destroy everyone who steps into them, even Cub Scouts.

“Cub” starts promisingly but never develops a rhythm or continuity. Part of the problem is that it has no protagonist. Sam is clearly a bit deranged himself, a fact made irrefutable after the death of a dog that had people fleeing from the P&I screening here in Toronto. Horror films by their very nature require a victim to root for, someone we want to see escape the madness. There’s never a reason to care about what’s happening in “Cub” and the filming doesn’t alleviate that hole in the center of the production. It’s as hollow as the trees in its forest. 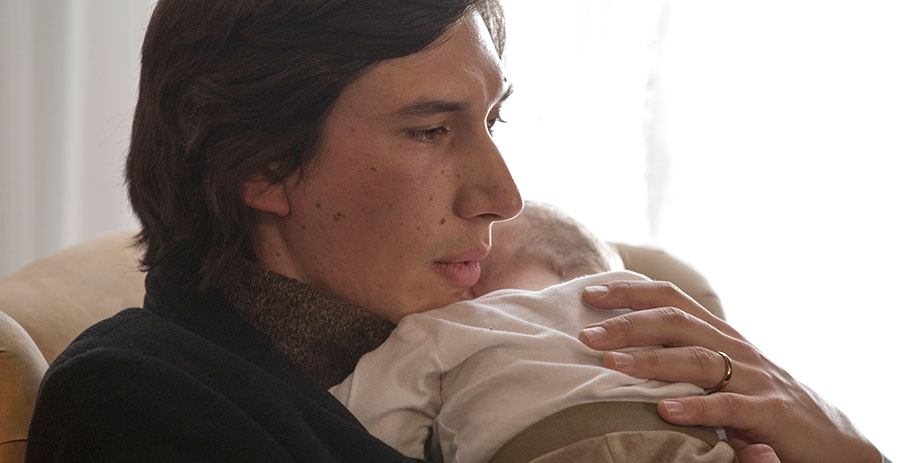 Two films that played outside of Midnight Madness but qualify in my opinion present completely different takes on horror. It may not be a traditional horror film but Venice Film Festival award-winning “Hungry Hearts” owes a LOT to the genre, especially the domestic horror of the ‘70s. It’s built around that structure of horror that mines terror from the idea that you don’t really know the person sleeping in the bed next to you. It features at least one great performance, but I find its very core to be a bit misogynistic and simplistic, and the stylistic choices that take it from drama to horror aren’t decisions that help the film. It’s an ugly, dispiriting piece of work, only really worth seeing for its leading man turn.

Who is that, you may ask? One of the key figures of TIFF 2014: Adam Driver. The star of TIFF films “While We’re Young” and “This is Where I Leave You,” does great work as Jude, a man who has a smelly meet-cute with Mina (Alba Rohrwacher) in a restaurant bathroom. The two fall in love, and she ends up pregnant. That’s where the problems begin. She refuses to eat well enough for a pregnant women. Wants to have a natural childbirth. And, when the baby is born, she goes deep into her own psychosis, refusing to feed the child the proteins it needs under the guide of veganism. Jude’s son hangs on the edge of life, and Mina refuses to go the doctor. How does a man take a child away from its own mother to save its life?

“Hungry Hearts” has a clever, unsettling concept. There are people who don’t believe in feeding their children meat-based proteins, or think that our medical system doesn’t have the right answers for their children. It could have made for a conversation-starting drama. That’s not this film. Mina is portrayed as a threat from too early on, and Costanzo shoots his film with such an ugly style, including extreme close-ups and fish-eye lenses. It’s domestic drama by way of Polanski, and I never bought a minute of it, despite Driver’s completely committed attempt to make me. 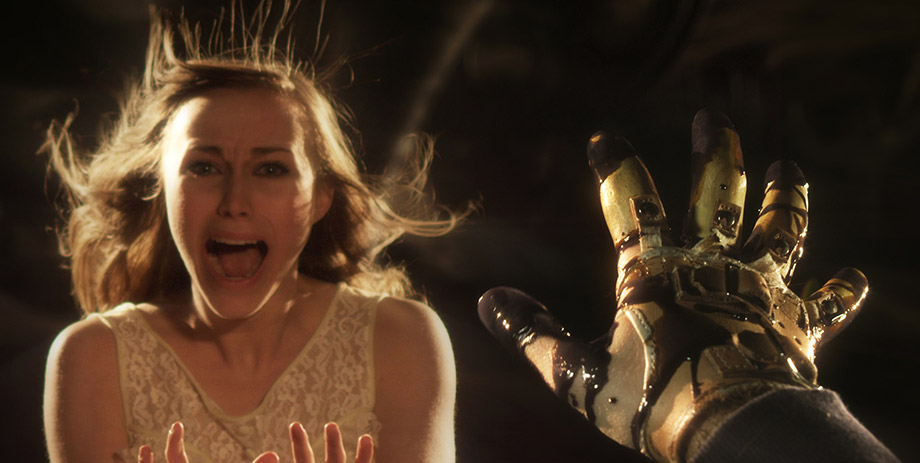 Finally, there’s one more Midnight Madness entry to discuss, “The Editor,” from the directors of “Father’s Day” and “Manborg,” two over-the-top B-movies that I enjoyed more than this twisted ode to the Giallos of the ‘70s. A remarkably bloody ode to Dario Argento and Mario Bava? Where do I get in line? And yet “The Editor” misses its mark tonally, failing to find the right blend of parody and horror to be effective. To be blunt, it’s not funny enough and never scary. It should have been smarter, crazier and scarier. Oh, don’t get me wrong, it’s insane, but not in a way that makes it work as a film.

Adam Brooks plays Rey Ciso, a master film editor who worked so hard that he cut off four fingers on his right hand and now wears a prosthetic. He’s fallen from the glory of his filmmaking past to work on the kind of projects unworthy of his talent. One such project has been overtaken by a serial killer, a person who’s knocking off the cast and most of the folks behind the scenes. Rey is suspect number one for the possibly-crazy detective (Matthew Kennedy) who is given the case and B-movie icons like Udo Kier and Paz de la Huerta pop up for flavor.

There are times when “The Editor” approaches the true insanity of a film like “Father’s Day” but it’s so tonally and comically inconsistent that it never matters. Being over-the-top is easy. It’s the pacing and timing that makes that extreme behavior entertaining that Brooks & Kennedy missed this time. I still like their original tone and willingness to try new things, and I’ll be eager to see what they do next, when they put this misfire behind them.