"The buffet of the universe."

Every day at the Cannes festival opens up the possibility of surprises, upsets, or major revelations. As Peter O'Toole in "Lawrence of Arabia" said, "Nothing is written." Film history is made here all the time, and I think some history was made today with the international debut of the American independent film "Beasts of the Southern Wild," by Benh Zeitlin, screening in the "A Certain Regard" section of the festival.. A first feature, it competes for the Camera d'Or. The world premiere was at Sundance back in January (where it won the Grand Jury Prize), but the high profile Cannes exposure will surely bring the film and its young star the worldwide attention it deserves. 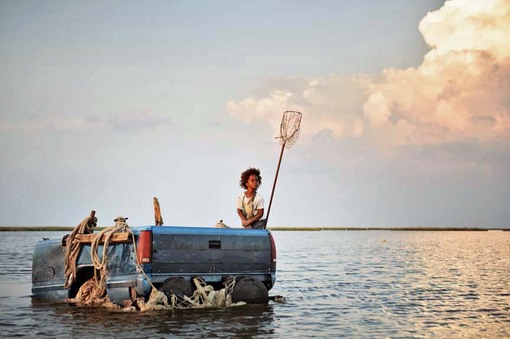 "Beasts of the Southern Wild" is set in a wild coastal swamp on the Gulf coast, in a watery area referred to as "the Bathtub," where the towers and smokestacks of chemical plants and refineries spread across the distant horizon. It's a post-Katrina allegory that adopts many of the real-life images and circumstances of that disaster to create a purely mythic fable full of visceral visions, primal emotions, and haunting reminders of the inescapable cycle of birth, life, death, and decay. 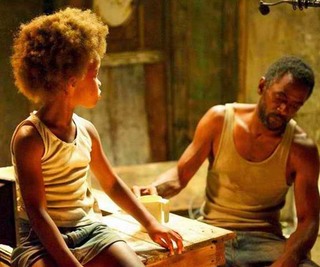 At the center of the film is Hushpuppy, a feisty, unafraid six-year-old who lives with her sickly and often unstable dad in an isolated wilderness squatters' community where they live off the land by trapping and fishing. Their home, such as it is, is the wreck of a small ramshackle trailer; their boat is the bed of an old pickup truck floating over 55-gallon drums. That mankind lives within nature's unforgiving food chain is a daily reality for these two. As Hushpuppy's teacher Miss Bathsheba reminds her handful of students, "Everything that lives is meat. I'm meat; y'all's asses is meat; all part of the buffet of the universe." 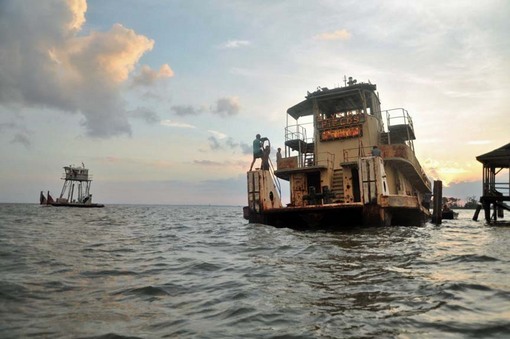 Hushpuppy narrates the film, coming to a day-by-day understanding through a wise child's eyes of the way every part of the universe fits together. Her little community lives in fear of the apocalyptic events predicted to destroy their world and leave it covered in water after the arctic ice melts. A ferocious storm hits and the water indeed comes, bringing death, new threats, and a new order of the universe to contend with.

It's difficult to describe the story of this film while also conveying its utter majesty and magic. Director Zeitlin makes poetry that is soul-shaking rather than pretty, even as it often displays formidable beauty. His images of collapsing icebergs, of wild boars stampeding in the mist, squirming caterpillars, a half-submerged cow corpse crawling with maggots, or a ragtag bunch of humans celebrating their escape from death, convey an emotionally-charged reality that transcends the myth of the film, even as they underline it. 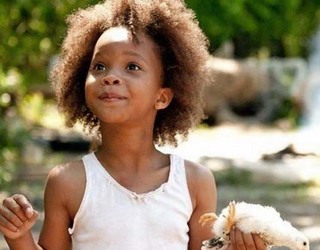 Holding "Beasts of the Southern Wild" together is the incredibly remarkable performance of Quvenzhané Wallis. I don't know how old this child is in real life, but she is a prodigy, and I wouldn't be at all surprised if she were to win this year's Best Actress prize. Introduced onstage briefly at the Debussy Theatre screening this morning, she was today's most adorable movie star, with her head of brown curls and her silver and peach-colored party dress with its skirt of cascading ruffles. The film received the most prolonged and enthusiastic applause that I've seen yet in this year's festival.

Italian director Matteo Garrone won the Grand Jury Prize at Cannes in 2008 with "Gomorrah." The film also won five European Film Awards, a Silver Hugo at the Chicago International Film Festival, and a Golden Globe nomination. Opting for a change of pace after that violent story of underworld families in Naples, he premiered the comedy "Reality" in competition today. 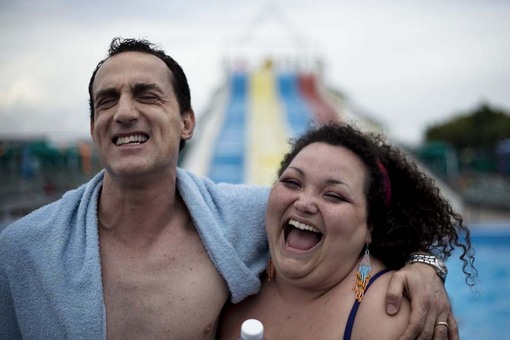 Also set in Naples, "Reality" is the story of Luciano, a fishmonger, and his ultimate dream to become a contestant on the reality TV show "Big Brother" (or "Grande Fratello" in Italian). Luciano looks a lot like Italian-American actor John Turturro, and is a natural performer. This makes him a pretty effective salesman when working his sideline, a scam that involves small kitchen appliances, and he even freelances as a clown at wedding receptions. He believes he's the ideal candidate for "Big Brother."

At the urging of his friends and family, Luciano attends a try-out for the show held at a shopping mall. To all appearances he doesn't make the grade, but he becomes convinced that the producers are testing him, and that every person he meets is one of their spies, and that every future action he takes is being weighed in their eyes. In effect, his entire life has become an extended audition, which drives his wife and family mad. 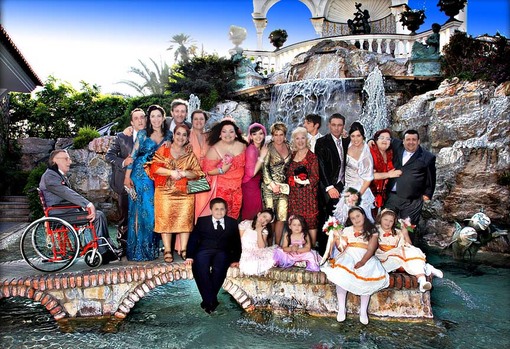 The situation becomes extreme and he begins giving away the family's household goods, still hoping for that critical phone call. Long after a new cast is chosen and hope would seem to be gone, Luciano travels to Rome, where he climbs a fence and sneaks into the studio at night. In the place of his dreams at last, he wanders though the areas of the set, a dazed smile of pure bliss on his face as he observes the cast members through two-way glass, finally settling in lounge chair to close his eyes... home at last.

Garrone's love for Naples is a strong element in this film, and he makes very effective use of its courtyards with hanging filigreed lanterns, crumbling stone tenement buildings, churches, squares, and palaces. This is a film that has local color to the max. So much so that I wondered how much those of us who don't speak Italian are missing in the rapid-fire exchanges that are one of the film's prevailing features. 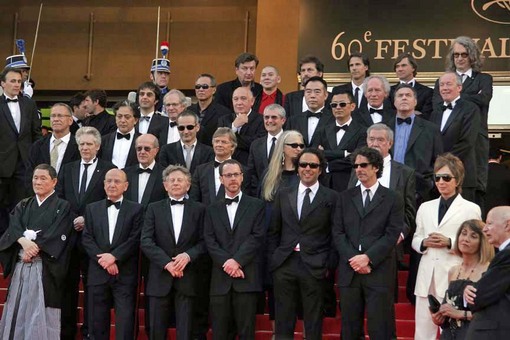 Waiting in line to get into the documentary "Film Anniversary: A Special Day," I ran into Michael Kutza, founder/director of the Chicago International Film Festival. "A Special Day" commemorates the historic gathering of 35 world directors at the 60th Cannes festival back in 2007, and Michael admits that he's looking for ideas for his own festival anniversary film when his festival turns 50 in two years. 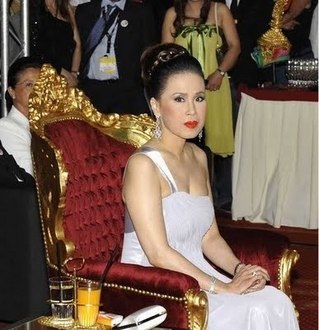 An invitation in my press mailbox (I don't get many) indicated that I was being summoned tonight to meet Her Royal Highness Princess Ubolratana Rajakanya Sirivadhana Barnavadi at a formal reception in honor of Thai cinema, to be held at the stately Carlton Hotel. A tempting offer, but the party unfortunately coincides with the world premiere press preview of "Beyond the Hills" by Romanian director Cristian Mungiu, possibly a strong contender for the Palme.

The princess will just have to get along without me. I noted the last item on the invitation's agenda: 20:30 [8:30 pm] "Enjoy the evening with Singha beer." Formal attire and royalty plus beer? I hope it's at least served in glasses.

If Mungiu's "Beyond the Hills" rated highly with tonight's audience, it would have been pretty hard to tell by the reaction in the theater. The film ended to three or four bellowing boos and a smattering of polite applause. Based on a real news story in which a woman visiting a monastery dies while being subjected to an exorcism, the film seems fairly faithful to the main facts, although Mungiu states in a press-book interview that he made many changes to the original story after months of research.

Like "4 Months, 3 Weeks and 2 Days," Mungiu's 2007 Palme d'Or winner, "Beyond the Hills" hinges on the friendship of two young women: one a take-charge personality; the other more meek and malleable. Unlike the earlier film, the source of the conflict is internal.

Alina and Voichita were raised together in an orphanage. They became everything to each other: family, and maybe more. When they came of age, Alina went to work in Germany with the plan that Voichita would eventually join her. Voichita instead looks for the comfort of family by joining an Eastern Orthodox-rite monastery, where a handful of nuns is presided over by a stern paternalistic priest who prefers to be called Papa by his charges. Although the time of the story is contemporary, life in the monastery harks back to another century, with no electricity, running water or modern conveniences.

As the film opens, Alina arrives by train and the two embrace passionately. Alina is overcome with emotion but Voichita wants to pull away. Something has profoundly changed in the dynamic of their relationship. The visit doesn't go well, and the novice nun mouths all the lines and phrases about sin and evil that she has most recently been taught. The priest recommends that Alina find peace by confessing her sins, especially when Voichita leaks that they include "self abuse." Voichita's refusal to go away with her friend sends Alina into the full mental breakdown that will dominate the rest of the story.

Mungiu doesn't demonize any of his characters, although they often damn themselves through their narrow and dogmatic view of the world. The priest is the most culpable in this regard, and yet he is often tolerant of the prolonged and increasingly violent character of Alina's illness, trusting that this is somehow God's plan.

Alina is at the core of the film, and yet she is the most difficult character to interpret. The true nature of her relationship with Voichita is hinted at yet remains ambiguous. Sent to a hospital, she voluntarily returns to the monastery to recover, but only if she's allowed to sleep in her friend's bed. Offered the chance to live with her former foster parents after another violent rampage, she elects to give away all her possessions to join the monastery even though she rejects their beliefs. She is jealous and full of rage, and after she sets fire to her room and attacks all who come near her, she is chained to a hastily-made wooden stretcher and prepared for an exorcism ritual of several days.

As many more films in competition premiere in the coming week, it will be interesting to see where "Beyond the Hills" ultimately places on the scale of public opinion and with the jury.