Between God and friendship

"Beyond the Hills" is an arthouse film from Romania, yet, in its slow, lurching progress toward a tragic exorcism, it is a stylistic nephew of America's "The Exorcist." William Friedkin's classic adaptation of a William Peter Blatty novel was pitched as popcorn entertainment for nervous Christians, whereas director Cristian Mungiu's embellishment of a true story (from the "non-fiction novels" by Tatiana Niculescu Bran) ultimately laments superstition, ignorance and indifference.

As with the "The Exorcist"'s implicit praise of faith versus a monstrously rational medical establishment, "Beyond the Hills" bursts to life when discreetly expressing a passion for… passion. Even in scenes that aren't set in blinding snow drifts, Mungiu's frame gives off a bitter chill to make your teeth chatter, all the better to offset characters whose sense of devotion burns so fiercely as to prove fatal.

Somewhere in rural Romania, young Alina (Cristina Flutur) visits her old boarding school friend Voichita (Cosmina Stratan) at the Orthodox convent where the latter has become a devout Christian. They're in their late teens now, and it's evident in their private moments together that they once enjoyed an intimate (and likely carnal) relationship, which Voichita now treats as a sin to be confessed and suppressed. Alina wants Voichita to run away from the convent with her, but Voichita won't budge. She wants Alina to do as she herself has done, redirect her passion for another person over to Christ.

It's the crackerjack stuff of a good melodrama or exploitation flick, but Mungiu, like many a priestly European auteur, isn't about to send his characters careening from one juicy plot point to another. The story proceeds as if captured, day by day, by some angelic documentary crew.

While Voichita attempts to coax Alina into the church and Alina uses every emotional weapon at her disposal (including her statuesque bare torso) to jab at her friend's faith, the camera frames everything in the context of communal routines and rituals. The business of a farm-based church is near-constant work. The Priest (Valeriu Andriuta) leads with a sense of compassionate pragmatism but also a strictly dogmatic interpretation of scripture. He can view Alina's escalating attacks on the church only as Satan lashing out at the faithful.

It's easy to forget that this story is set in the 21st Century, but there are enough run-ins with relatively down-to-earth locals to provide telling contrast. One particularly outraged emergency room doctor who encounters the church members goes on a tirade against blind dogma that I suspect speaks for Mungiu — although the latter's "voice" trembles less with rage than with pained empathy.

As with "4 Months, 3 Weeks and 2 Days," Mungiu's other tale of a female friendship taken to the limits by a punishing set of circumstances, this film's biggest secret is its beauty. Cinematographer Oleg Mutu understands something about light that filmmakers, whether going for ugly "miserablism" or commercial sheen, rarely exploit: Winter light is gorgeous. An overcast sky and blankets of snow cast faces in an even brilliance that suits Mungiu's even-handed purposes. It's the nature of events that lends them a feeling of horrifying inevitability, but to the eye, Mutu's imagery celebrates the vibrant disorder and discord that the rituals of Voichita's sect mean to deny with ideological certainty. In this democratic light, there is something true and spiritual about both Alina's love for Voichita and Alina's commitment to Jesus — with each seeing only mad delusion in the other. And each refusing to "give up" on the other.

While the pressure comes down on Alina physically, it is Cosmina Stratan's performance as Voichita, often the focal point of crowded compositions in her dark clothing, hands slack at her sides or clenched in prayer, that conveys downright medieval suffering most piercingly. She's virtually held in stasis by two powerful, opposing magnets, her love for Alina and her faith.

The exorcism itself is pure screwball tragedy. The priest and his flock of weeping nuns manage it about as smoothly as an army private attempting a battlefield amputation. Alina, bound and tortured by well-meaning people, confronts her fate like Maria Falconetti's Joan of Arc: At one point, a look of religious ecstasy passes over her face that suggests the kind of church Peter Gabriel evoked in a top 40 pop song. Religion is where you find it. 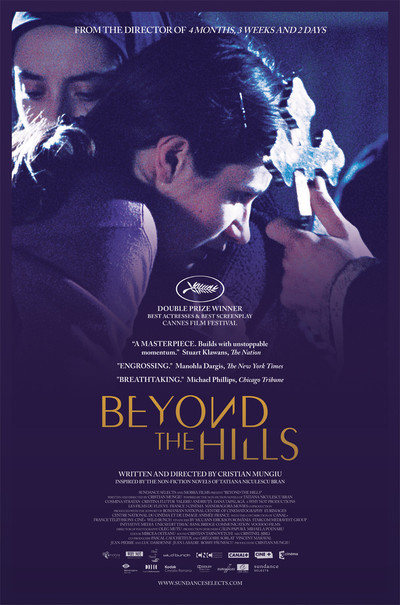